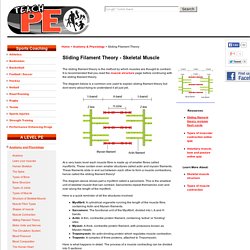 The diagram above shows part a myofibril called a sarcomere. Here is a quick reminder of all the structures involved: Sliding Filament Model of Muscle Contraction - Wolfram Demonstrations Project. The basic unit of striated muscle tissue is known as a sarcomere. 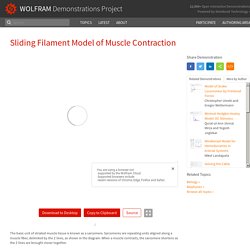 Sarcomeres are repeating units aligned along a muscle fiber, delimited by the Z lines, as shown in the diagram. When a muscle contracts, the sarcomere shortens as the Z lines are brought closer together. The two main filaments involved in muscle contraction are composed of actin, the thin filaments, and myosin, the thick filaments. Notice the cross bridges on the myosin, which attach to the actin during contraction. The arrangement of these filaments in sarcomeres results in the striated appearance of muscle cells under a microscope. Initially, scientists believed that the actin and myosin filaments themselves shortened during contraction. [less] Actin, Myosin, and Cell Movement - The Cell - NCBI Bookshelf. Muscles, part 1 - Muscle Cells: Crash Course. Muscles, part 2 - Organismal Level: Crash Course. How Do Muscles Grow? Article Reviewed: Charge, S. 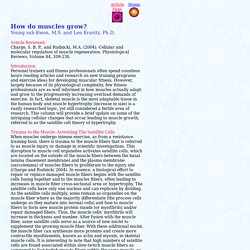 B. P., and Rudnicki, M.A. (2004). Cellular and molecular regulation of muscle regeneration. Physiological Reviews, Volume 84, 209-238. Introduction Personal trainers and fitness professionals often spend countless hours reading articles and research on new training programs and exercise ideas for developing muscular fitness. Trauma to the Muscle: Activating The Satellite Cells When muscles undergo intense exercise, as from a resistance training bout, there is trauma to the muscle fibers that is referred to as muscle injury or damage in scientific investigations. Growth factors Growth factors are hormones or hormone-like compounds that stimulate satellite cells to produce the gains in the muscle fiber size. Growth hormone is also highly recognized for its role in muscle growth. All studies show that men and women respond to a resistance training stimulus very similarly.

Muscle Fibre Types. Within skeletal muscle there are three types of fiber. 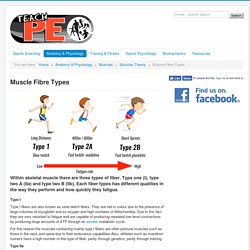 Type one (I), type two A (IIa) and type two B (IIb). Each fiber types has different qualities in the way they perform and how quickly they fatigue. Type I Type I fibers are also known as slow twitch fibers. They are red in colour due to the presence of large volumes of myoglobin and so oxygen and high numbers of Mitochondria. For this reason the muscles containing mainly type I fibers are often postural muscles such as those in the neck and spine due to their endurance capabilities Also, athletes such as marathon runners have a high number of this type of fiber, partly through genetics, partly through training. Type IIa Type IIa fibers are also sometimes known as fast oxidative fibres and are a hybrid of type I and II fibers. 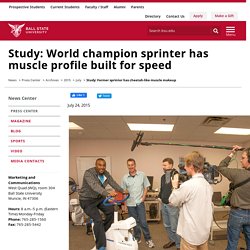 "Colin Jackson - Making of Me" was broadcast in 2008. A former world champion sprinter is the first human tested to have nearly a quarter of his leg muscle fibers categorized as “super fast,” says a report from Ball State University. Muscle biopsies taken by researchers at Ball State’s Human Performance Laboratory (HPL) from Colin Jackson, who holds the current indoor world record in the 60-meter hurdles, found his legs had an abundance of pure MHC IIx muscle fibers—also known as “super fast.” His total fast-twitch population, including the super fast fibers, was 71 percent.