An Appetite for Wonder Review: The Closed Mind of Richard Dawkins. The Frontiers of Secularism : An Interview with Phil Zuckerman. Phil Zuckerman is a professor of sociology and secular studies at Pitzer College in Claremont, California. 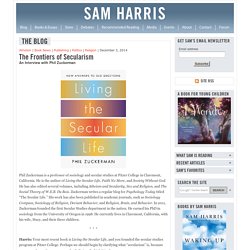 He is the author of Living the Secular Life, Faith No More, and Society Without God. The Path Between Pseudo-Spirituality and Pseudo-Science. (Photo via Bala Sivakumar) I am often asked what will replace organized religion. 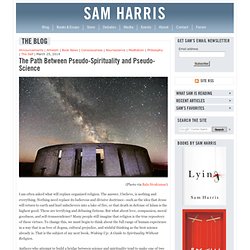 The answer, I believe, is nothing and everything. The Roots of Good and Evil : An Interview with Paul Bloom : Paul Bloom is the Brooks and Suzanne Ragen Professor of Psychology at Yale University. 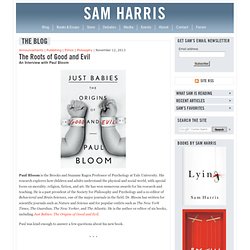 Sam Harris - Death and the Present Moment. Evolution: Richard Dawkins: Quotes from The Selfish Gene and The Blind Watchmaker. Richard Dawkins Discussion of Quotes by Evolutionary Scientist Richard Dawkins Our brains are separate and independent enough from our genes to rebel against them.. we do so in a small way everytime we use contraception. 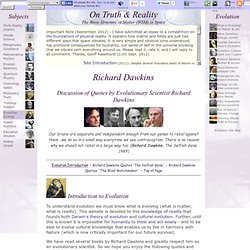 There is no reason why we should not rebel in a large way too. (Richard Dawkins, The Selfish Gene 1989) Introduction to Evolution To understand evolution we must know what is evolving (what is matter, what is reality). We have read several books by Richard Dawkins and greatly respect him as an evolutionary scientist. Response to Controversy. This Must Be Heaven. Free Will and “Free Will” : How my view differs from Daniel Dennett's. (Photo by h.koppdelaney) I have noticed that some readers continue to find my argument about the illusoriness of free will difficult to accept. 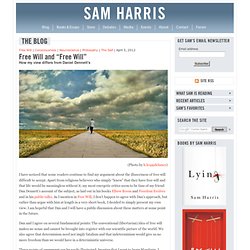 Apart from religious believers who simply “know” that they have free will and that life would be meaningless without it, my most energetic critics seem to be fans of my friend Dan Dennett’s account of the subject, as laid out in his books Elbow Room and Freedom Evolves and in his public talks. As I mention in Free Will, I don’t happen to agree with Dan’s approach, but rather than argue with him at length in a very short book, I decided to simply present my own view. I am hopeful that Dan and I will have a public discussion about these matters at some point in the future. Dan and I agree on several fundamental points: The conventional (libertarian) idea of free will makes no sense and cannot be brought into register with our scientific picture of the world. Take a moment to survey your immediate surroundings. Daniel C. Dennett and The Awesome Power of Memes: Nested Universe - Singularity Blog, Artificial Intelligence, Robotics, Cosmology, Science and Technology.

On the Freedom to Offend an Imaginary God. The latest wave of Muslim hysteria and violence has now spread to over twenty countries. 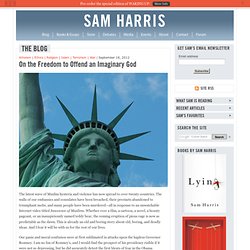 The walls of our embassies and consulates have been breached, their precincts abandoned to triumphant mobs, and many people have been murdered—all in response to an unwatchable Internet video titled Innocence of Muslims. Whether over a film, a cartoon, a novel, a beauty pageant, or an inauspiciously named teddy bear, the coming eruption of pious rage is now as predictable as the dawn. This is already an old and boring story about old, boring, and deadly ideas. And I fear it will be with us for the rest of our lives. Our panic and moral confusion were at first sublimated in attacks upon the hapless Governor Romney.

Our government followed the path of appeasement further by attempting to silence the irrepressible crackpot Pastor Terry Jones, who had left off burning copies of the Qur’an just long enough to promote the film. What exactly was in the film? That final, provincial detail matters. Author of 'Am I a Monkey?' explores questions of life. On the cover of his new book, Francisco Ayala is sticking a banana on a fork and asking: Am I a monkey? 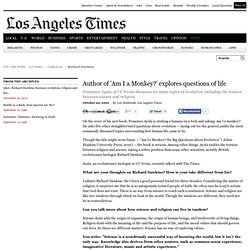 He asks five other straightforward questions about evolution — laying out for the general public the most commonly discussed topics surrounding how human life came to be. Though the title might seem funny — "Am I a Monkey? Six Big Questions about Evolution" ( Johns Hopkins University Press, 2010) — the book is serious. Among other things, Ayala tackles the tension between religion and science, taking a softer position than some other scientists, notably British evolutionary biologist Richard Dawkins. Ayala, an evolutionary biologist at UC Irvine, recently talked with The Times. What are your thoughts on Richard Dawkins? Sam Harris: Losing Our Spines to Save Our Necks - Politics on The Huffington Post. Geert Wilders, conservative Dutch politician and provocateur, has become the latest projectile in the world's most important culture war: the zero-sum conflict between civil society and traditional Islam. 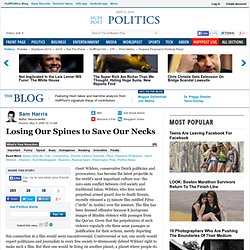 Wilders, who lives under perpetual armed guard due to death threats, recently released a 15 minute film entitled Fitna ("strife" in Arabic) over the internet. The film has been deemed offensive because it juxtaposes images of Muslim violence with passages from the Qur'an. Given that the perpetrators of such violence regularly cite these same passages as justification for their actions, merely depicting this connection in a film would seem uncontroversial. Controversial or not, one surely would expect politicians and journalists in every free society to strenuously defend Wilders' right to make such a film. Sam Harris - the Blog.