Easy natural and low cost waterfilter. Water Published on February 27th, 2014 | by Derek Markham A low-tech water filter system made from a branch of a tree can filter up to four liters of water per day, removing up to 99% of E. coli bacteria and producing fresh, uncontaminated, drinking water. 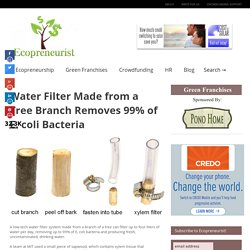 A team at MIT used a small piece of sapwood, which contains xylem tissue that transports sap inside the tree, to build an effective water filter that could make a big difference in places where contaminated water is the norm. By using this type of filter, rural communities may be able to solve some of their water issues in a low-cost and efficient manner. “Today’s filtration membranes have nanoscale pores that are not something you can manufacture in a garage very easily. The team used white pine branches, with the outer bark stripped off, and secured the pieces in a piece of plastic tubing to create the water filter. “There’s huge variation between plants. How To Get Well Water Without Electricity. Considering that most disasters can cause serious disruptions in the water supply and the importance of water for survival, putting in a well is a great idea. 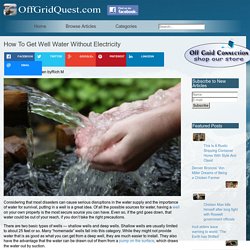 Of all the possible sources for water, having a well on your own property is the most secure source you can have. Even so, if the grid goes down, that water could be out of your reach, if you don’t take the right precautions. There are two basic types of wells — shallow wells and deep wells. Shallow wells are usually limited to about 25 feet or so. Many “homemade” wells fall into this category. Deep wells can’t use a suction pump to draw the water, simply because nobody can build a pump with enough suction to draw the water that far up a tube. Both of the types of pumps I just mentioned are electrically powered. Of course, if you are producing your own electrical power from either wind turbines or solar panels, you will be able to operate your well’s pump, even if there is no other source of power available. Wind-powered device can produce 11 gallons per day of clean drinking water from the air. WaterSeer is a low-tech, low-cost atmospheric water condenser that could help create water self-sufficiency in communities around the world. 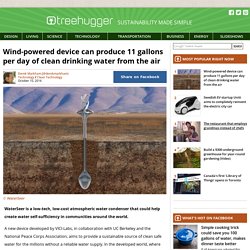 A new device developed by VICI-Labs, in collaboration with UC Berkeley and the National Peace Corps Association, aims to provide a sustainable source of clean safe water for the millions without a reliable water supply. In the developed world, where most homes and businesses have ready access to clean water at the turn of a tap, we don't really have to worry about most waterborne diseases, or dehydration, or the ability to wash our selves, our clothes, or our eating utensils, but those worries are still very real for the millions around the world without a reliable clean water source.

The WaterSeer could help to alleviate some of those water poverty issues. And the best part? The WaterSeer will be priced at just $134. Toilet Top Sink. There are a lot of materials you could use to to make this project. 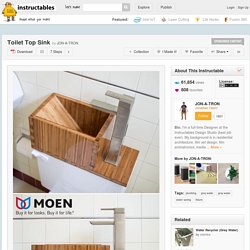 I was thinking of cast concrete in the beginning because it's a moldable material and can be made waterproof with the right sealant. I finally decided on a wooden box with a sloped basin because I love the aesthetic. Wood is usually associated with rot when combined with water, but with the right materials and maintenance it can last just as long as concrete. The first step in designing anything is measuring. First, I made a template of my toilet tank by placing a piece of stiff paper on top of the open tank, and tracing around it with a felt pen. With a scanned template to work off of, I designed the box in Fusion 360 (it's free with an "enthusiast" license, and it does everything I need it to).

With the model completed, I was able to quickly make templates for use with the router so I could quickly and precisely fabricate the piece. Toilet Sink, Transform Toilet Lid into a Sink by SinkTwice. Desalination Breakthrough: Saving the Sea from Salt. Farid Benyahia wants to solve two environmental problems at once: excess carbon dioxide in the atmosphere and excess salt in the Persian Gulf (aka the Arabian Gulf). 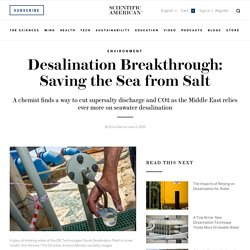 Oil and natural gas drive the region’s booming economies—hence the excess CO2—and desalination supplies the vast majority of drinking water, a process that creates concentrated brine waste that is usually dumped back into the gulf. Benyahia, a chemical engineer at Qatar University, thinks he may have hit on a neatly efficient way to address the problem. “The goal is to solve two nasty environmental problems with one smart solution and generate useful, marketable products to offset partially the cost of storing CO2,” he says. The secret is a variant of the Solvay process, a 150-year-old, seven-step chemical conversion method that is widely used to produce sodium carbonate for industrial applications, and that many chemists are working to refine.

Brine disposal is a big problem in much of the Middle East.