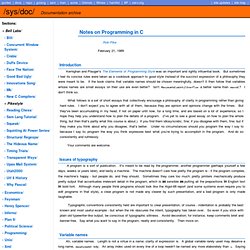 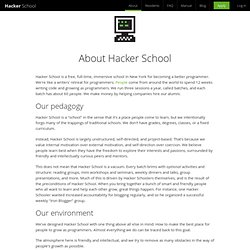 We're like a writers' retreat for programmers. People come from around the world to spend 12 weeks writing code and growing as programmers. Defensive Programming vs. Batshit Crazy Paranoid Programming. We Recommend These Resources Hey, let’s be careful out there. 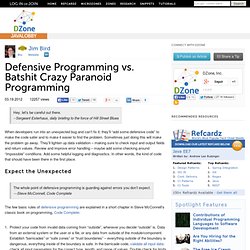 --Sergeant Esterhaus, daily briefing to the force of Hill Street Blues When developers run into an unexpected bug and can’t fix it, they’ll “add some defensive code” to make the code safer and to make it easier to find the problem. Sometimes just doing this will make the problem go away. They’ll tighten up data validation – making sure to check input and output fields and return values. Expect the Unexpected. SOLID software design... My hopeless backlog One of the bad habits I have is accumulating lists of things to read. 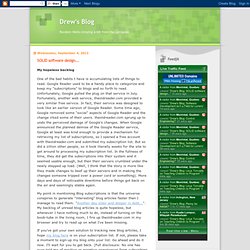 Google Reader used to be a handy place to categorize and keep my "subscriptions" to blogs and so forth to read. Unfortunately, Google pulled the plug on that service in July. NbK - 17 - the cookbook and pensive way of doing things. It's been a while since I was wearing gloves and mixing solutions, but I find myself a lot of times still in a wet-lab mindset when it comes to how I do things. 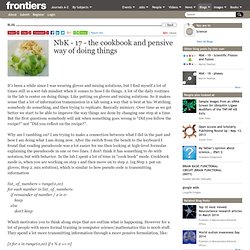 A lot of the daily routines in the lab is center on doing things. Like putting on gloves and mixing solutions. Norvig's LISP style guide. Robert C. Martin - Clean Architecture. Where can I find problems - CS101. Short coding exercises in Python and Java. 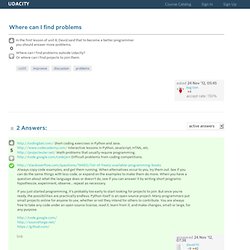 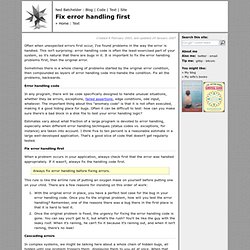 This isn't surprising: error handling code is often the least-exercised part of your system, so it's natural that there are bugs in it. It is important to fix the error handling problems first, then the original error. Sometimes there is a whole chaing of problems started by the original error condition, then compounded as layers of error handling code mis-handle the condition. Fix all the problems, backwards. In any program, there will be code specifically designed to handle unusual situations, whether they be errors, exceptions, failed assertions, edge conditions, odd input, whatever. Estimates vary about what fraction of a large program is devoted to error handling, especially when different error handling techniques (status codes vs. exceptions, for instance) are taken into account. 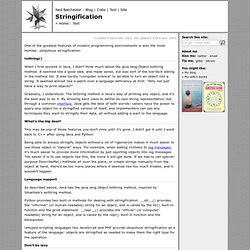 When I first worked in Java, I didn't think much about the java.lang.Object.toString method. Books, course supplements and other learning resources - CS101. Teach Yourself Programming in Ten Years. How to be a Programmer: A Short, Comprehensive, and Personal Summary. Debugging is the cornerstone of being a programmer. 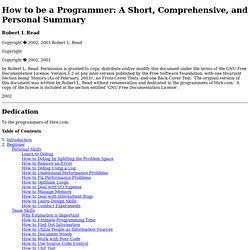 The first meaning of the verb to debug is to remove errors, but the meaning that really matters is to see into the execution of a program by examining it. A programmer that cannot debug effectively is blind. Idealists that think design, or analysis, or complexity theory, or whatnot, are more fundamental are not working programmers. The working programmer does not live in an ideal world. Even if you are perfect, your are surrounded by and must interact with code written by major software companies, organizations like GNU, and your colleagues. Debugging is about the running of programs, not programs themselves. To get visibility into the execution of a program you must be able to execute the code and observe something about it. The common ways of looking into the ‘innards’ of an executing program can be categorized as: MattDeBoard.net. Written on Wednesday, November 23, 2011 I posted a very brief response to a post on HackerNews yesterday challenging the notion that 8 weeks of guided tutelage on Ruby on Rails is not going to produce someone who you might consider a "junior RoR developer. 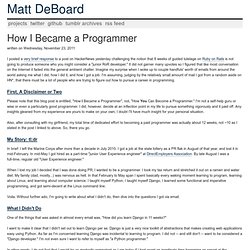 " It did not garner many upvotes so I figured that like most conversation on the Internet it faded into the general ambient chatter. Become a Good Programmer in Six Really Hard Steps. One of the more popular topics here on the GDNet forums goes something like this: "Hi, I just [bought a computer | wrote a simple game | discovered a game engine] and I want to know where to go from here. How I Learned to Program. Programming is, without a doubt, the most mentally rewarding thing I've ever done. Programming taught me that life should be fun, filled with creativity, and lived to the fullest. Programming taught me that anything is possible; I can do anything I want using only my mind. Programming also taught me that learning is fun. It showed me that the more you know, the more power you have. Learning to Code: The Roadmap I Wish I Had Been Given - Jimmy Li. Log message style guide. Created 9 December 2002, last updated 6 February 2003 One of the fit-and-finish issues all systems developers need to address is the text of log messages.

This is a log message style guide. Once your product ships, it will be in customers' hands. They will run it on their machines. “Note to Self” by John Barnette. Be Confident Tests build confidence. Write ‘em. The Zen of Python. Abstract Long time Pythoneer Tim Peters succinctly channels the BDFL's guiding principles for Python's design into 20 aphorisms, only 19 of which have been written down. The Zen of Python. Style Guide for Python Code. The Principles of Good Programming. Heron-Centric: Ruminations of a Language DesignerThe Principles of Good Programmingby Christopher DigginsJuly 24, 2011. Python. Sourced[edit] And what defines a 'python activist' anyway? Blowing up Perl installations worldwide?