Inside Story - The politics of global food security. Duncan Claeys2018 Article PoliticizingFoodSecurityGovern. Global water crisis and future food security in an era of climate change. Water Security. Food Deserts: Causes, Impacts, & What to Do. Everybody eats. 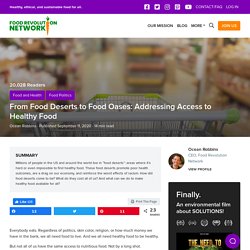 Regardless of politics, skin color, religion, or how much money we have in the bank, we all need food to live. And we all need healthy food to be healthy. But not all of us have the same access to nutritious food. Not by a long shot. Areas without access to nutritious, high-quality, affordable food are known as food deserts. Food deserts tend to be predominantly areas of low income, areas where residents often don’t have cars, and they are almost always communities of color.

In fact, one study found that Black Americans are nearly 400% more likely than white Americans to live in a neighborhood or community that lacks a full-service supermarket. The “Food” in Food Deserts Food Revolution Summit speaker Ron Finley, a food justice advocate in South Los Angeles, California, says that in his community, it’s easier to get alcohol than it is to get an organic apple. It’s not necessarily the case that people living in food deserts don’t have plenty of access to calories. 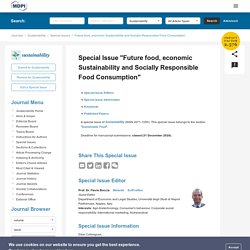 So, it is interesting to investigate food consumer preferences regarding responsible initiatives of a company and to develop and validate models, in order to formalize the origins of behaviours regarding consumer preferences towards responsible initiatives and detect the drivers of their purchase. Yet, another related basic topic is the modern food technology. Davos 2020: The Future of Consumption in ASEAN. Future Food by World Economic Forum! FAKE MEAT Produced by 3-D Printer! Connecting best practices of local communities as a counterweight to the industrial food system. Akram-Lodhi, H. 2012. 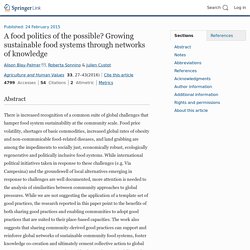 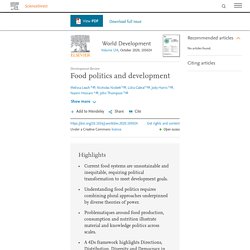 Introduction 1.1. Food politics as central to development Food has become a pivotal topic in development, capturing high level attention in international policy debates, and amongst global, national and local actors. Food implicates matters of production, reproduction, distribution, consumption – and the interlinkages between these, across global, national and local scales. This article reviews these political processes and addresses how they might be conceptualised, considering how and why a range of theoretical and disciplinary approaches is necessary to capture their extent and range.

Food Fight. Humans have always depended on the sea. 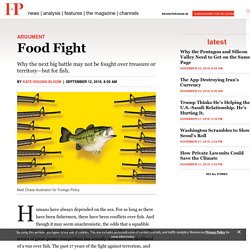 For as long as there have been fishermen, there have been conflicts over fish. And though it may seem anachronistic, the odds that a squabble over fishing rights could turn into a major armed conflict are rising. The return of great-power competition has actually increased the likelihood of a war over fish. The past 17 years of the fight against terrorism, and Washington’s renewed focus on developing high-end capabilities to prepare for great-power conflict, have led to a lack of preparation for a low-end, seemingly mundane but increasingly likely source of conflict in the world: food. As incomes rise around the world, so too does the demand for food—especially protein. The supply of both wild and farmed fish will not keep up. The political leaders of rising powers will feel enormous pressure to secure the resources their citizens demand—even if it means violating international norms and rules.

There are other ways that fish can trigger war. Brexit: A threat to Britain&#39;s food security? - Counting the Cost. Lbna27252enn.