The Feynman Lectures on Physics 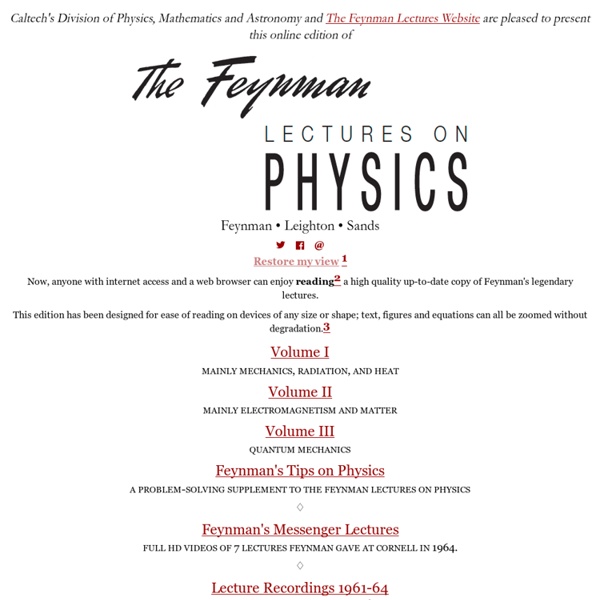 Logical Fallacies Beyond Wikipedia: 19 References You Can't Do Without February 19, 2008 | 200,905 views Share Wikipedia can serve as a great introduction to a subject, and connect you to other related ideas, people and places. Bartleby -- Famous quotes and full poetry texts Citizendium -- More “professional” Wikipedia, although usually not as detailed Answers.com -- Makes use of the information on Wikipedia and many other reference sites to become a one stop shop ePodunk -- Information about cities and places Encyclopedia Britannica -- An excellent source of information, and much more authoritative than Wikipedia. Scholarpedia -- A step up from both Wikipedia and Citizendium in terms of scholarly respectability; the articles are all written by experts with peer review JSTOR (limited access; talk to your school or library) -- All those stuffy journals around your professor’s office, and articles in your course packets Oxford English Dictionary (limited access; talk to your school or library) -- The definitive resource when it comes to the English language

Creationism Is Not Being Ignored On 'Cosmos' -- It's Actually The Focus By Betsy Phillips, Guest Contributor "Creationism Is Not Being Ignored On ‘Cosmos’ — It’s Actually The Focus" CREDIT: Frank Micelotta/Invision for FOX/AP Images Danny Faulkner, a “scientist” working for the same group that runs Kentucky’s creation museum was complaining last week that Neil deGrasse Tyson’s Cosmos: A Spacetime Odyssey doesn’t address creationism. From Mashable: Faulkner claimed the 13-episode series has a distinct “evolutionary bias,” and agreed with Mefferd’s concern that Cosmos doesn’t even present creationism as an alternative theory. This seems to be the prevailing sense on the other side as well. Actually, Tyson is deliberately and straightforwardly giving a whole lot of time to creationism. Another example: Why did Tyson spend so much time explaining the similarities and differences in how polar bears have evolved through natural selection vs. how dogs have changed in the time we’ve been breeding them for certain traits? Tyson isn’t ignoring creationism.

If you have an Android phone, try these secret codes! | Daily Pastime Various hidden menus, diagnostic, look at the state of wireless networks, all available without installing special applications, it is necessary only to take advantage of the possibility that the numeric keypad is revealed when activating the phone part of the device. photo/ google images Even in the age of of ordinary mobile phone users are aware of the existence of a “secret codes” that would allow them access to things normally hidden from sight, a variety of tests designed mobile operators and the like. Of course, this should be borne in mind that not all Android devices support all codes, and some are intended only series or individual devices, but you should definitely try:

What Is the Higgs? - Interactive Graphic Imagine never having seen a snowflake. Now prove one exists by probing the slush and mist of melting snow. You can’t see a Higgs boson, and no sensor can pick one out from the Higgs field that it forms. For 50 years, physicists have been building larger and more powerful accelerators to vaporize particles and sift through the debris. In the tunnels at CERN, protons are sped along a track to within a breath of the speed of light, then smashed together in a violent explosion. The protons annihilate each other, releasing a burst of energy. But Einstein tells us that mass is energy, and physics tells us that energy can’t be destroyed. An array of new particles pours from the fireball, energy spun back into tiny specks of mass. A machine surrounds and tracks the debris, bending charged particles as they plow through layers of sensors. Repeat this a million times, then tens of millions, before a second has passed. And keep going because you’re looking for something very rare. Once every few billion impacts,

Online Learning: A Bachelor's Level Computer Science Program Curriculum Introduction [Update: See also the follow-up post to this piece, An Intensive Bachelor's Level Computer Science Curriculum Program.] A few months back we took an in-depth look at MIT’s free online Introduction to Computer Science course, and laid out a self-study time table to complete the class within four months, along with a companion post providing learning benchmarks to chart your progress. In the present article, I'll step back and take a much more broad look at com-sci course offerings available for free on the internet, in order to answer a deceptively straightforward question: is it possible to complete the equivalent of a college bachelor’s degree in computer science through college and university courses that are freely available online? The former question is more difficult to answer than it may at first appear. Yet, this does not mean that all the necessary elements for such a curriculum are not freely accessible. Our hypothetical curriculum will simplify this model.

Khan Academy From kindergarten to calculus, Khan Academy is here to help. Sharpen your skills with over 100,000 interactive exercises. Over 100,000 interactive exercises. You may have heard about our videos, but did you know that Khan Academy has fun interactive math exercises that cover skills ranging from counting to calculus, grade by grade? Created and peer-reviewed by a team of math educators, our exercises include full coverage of US Common Core and beyond, ranging from early math through calculus. Review student progress in real time. You will be empowered with instant, in-depth feedback and reports so you’ll know exactly where each student and your class as a whole stand at any time throughout the year. Stay up to date with your child’s progress. You’ll get quick email updates so you can see your children’s progress as they learn, both when they’ve mastered new skills and when they might be struggling.

15 Best Online Resources for College Students Online resources have made an entire revolution in education, not only because they are convenient and accessible, but because they make the entire process of teaching and learning more interesting and memorable. There are free and paid online resources for college students and they usually complement one another quite well. Each student will prefer different resources according to their subjects of interest and learning style, but there are universally great tools that impress nearly every student who tries them. In order to help college students locate the best online resources that will make their lives easier, we tailored a list of 15 most useful links that offer exactly what they need for achieving good grades. 1. The Rapid E-Learning Blog (Articulate Network) Tom Kuhlmann is a blogger who shares practical tips all students can benefit from. 2. 3. 4. The Saylor Foundation started with a very simple, honest, and strong idea: to make education free for everyone. 5.Study Guide Zone 6.

5 Great Resources To Learn How To Code However, more often than not, there seems to be a problem of actually finding good content online that can teach you to code. Experimenting with a language can only get you so far. To master it, you need to have proper guidance from people who actually know what they are talking about. So where can you find expert guidance without shelling out a fortune for it? You could start with checking out the websites below: Dream In Code Just taking a look at their logo ought to tell you that the community at Dream In Code isn’t something to mess around with. They have everything. They also have a video channel and links to developers’ blogs if you want to look deeper. W3Schools If what you want to master is a Web technology, you’ve got to give W3Schools a look. You can get tutorials ranging from plain-Jane HTML, right up to AJAX and the likes. Eloquent JavaScript If you’ve ever had to use a Greasemonkey Script or a Bookmarklet, you have a clue about the kind of power that JavaScript possesses.