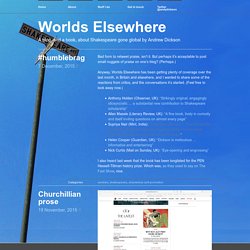 But perhaps it’s acceptable to post small nuggets of praise on one’s blog? (Perhaps.) Anyway, Worlds Elsewhere has been getting plenty of coverage over the last month, in Britain and elsewhere, and I wanted to share some of the reactions from critics, and the conversations it’s started. (Feel free to look away now.) I also heard last week that the book has been longlisted for the PEN Hessell-Tiltman history prize. Pleasing to have one’s name up in pixels alongside Karl Ove Knaussgard and Paul Muldoon: I’ve a piece on NewYorker.com, my first, in honour – honor? It’s about the wonderful Caryl Churchill, trying to get at her dazzling, disquieting talent for capturing where we really are as a culture, from the passionately argued feminism of Top Girls to the gender-bending craziness of Cloud Nine, all the way back to her early radio work. On Caryl Churchill’s prophetic drama (New Yorker) (Might have to go and lie down for a wee while after reading those.)

Othello. Putting Othello in context: a summary of sources. By using this site, you agree we can set and use cookies. 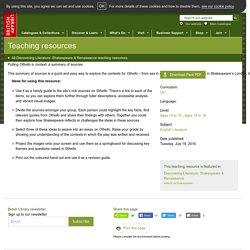 OK For more details of these cookies and how to disable them, see our cookie policy. Strangers in the city: the cosmopolitan nature of 16th-century Venice. Character analysis: Iago in Othello. Alexandra Melville provides a close reading of the villainous character of Iago in Act 2, Scene 1 of Othello. 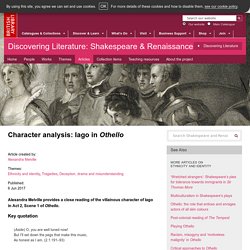 Key quotation (Aside) O, you are well tuned now! But I'll set down the pegs that make this music, As honest as I am. (2.1.191–93) Setting the scene. Playing Othello. Hugh Quarshie describes his reservations about Othello, and how he used these to shape the production in which he played the title role. 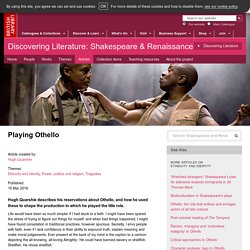 Life would have been so much simpler if I had stuck to a faith. I might have been spared the stress of trying to figure out things for myself; and when bad things happened, I might have found consolation in traditional practices, however spurious. Secretly, I envy people with faith, even if I lack confidence in their ability to expound truth, explain meaning and make moral judgements. Ever present at the back of my mind is the caption to a cartoon depicting the all-knowing, all-loving Almighty: ‘He could have banned slavery or shellfish. Shellfish. Universal genius? Some secular people have embraced the quasi-religion of Bardolatry, declaring Shakespeare as the god of their idolatry. The first illustrated works of Shakespeare edited by Nicholas Rowe, 1709 View images from this item (74) Ira Aldridge as Aaron the Moor in Titus Andronicus Footnotes. 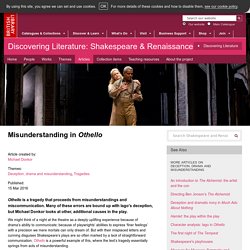 Many of these errors are bound up with Iago's deception, but Michael Donkor looks at other, additional causes in the play. We might think of a night at the theatre as a deeply uplifting experience because of drama’s ability to communicate; because of playwrights’ abilities to express ‘finer feelings’ with a precision we mere mortals can only dream of. But with their misplaced letters and cunning disguises Shakespeare’s plays are so often marked by a lack of straightforward communication. Othello is a powerful example of this, where the text’s tragedy essentially springs from acts of misunderstanding. Our attention when exploring the idea of miscommunication in the text rightly rests on Iago and his deceptions. Othello: the role that entices and enrages actors of all skin colours. Andrew Dickson explores how different actors have struggled with the character of Othello and the play's depiction of race. 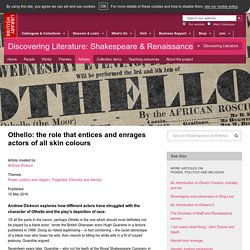 ‘Of all the parts in the canon, perhaps Othello is the one which should most definitely not be played by a black actor,’ wrote the British-Ghanaian actor Hugh Quarshie in a lecture published in 1998. Racism, misogyny and ‘motiveless malignity’ in Othello. The causes of the tragedy of Othello are more complex and disturbing than they might at first appear, Kiernan Ryan contends. 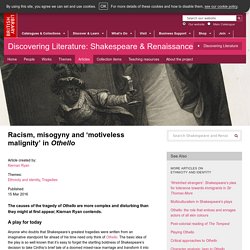 A play for today Anyone who doubts that Shakespeare’s greatest tragedies were written from an imaginative standpoint far ahead of his time need only think of Othello. The basic idea of the play is so well known that it’s easy to forget the startling boldness of Shakespeare’s decision to take Cinthio’s brief tale of a doomed mixed-race marriage and transform it into a heart-breaking tragedy.

In a country where few people outside London would ever have seen a black person, and centuries before the problems that fuel the tragedy became as ubiquitous and pressing as they are today, Shakespeare produced in Othello a searing critique of racial and sexual injustice, which is more powerful now in the 21st century than it could ever have been at the dawn of the 17th.

Critical approaches to Othello. There have been numerous interpretations of Othello over the last 400 years. 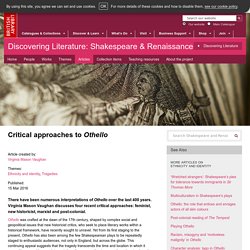 Virginia Mason Vaughan discusses four recent critical approaches: feminist, new historicist, marxist and post-colonial. Othello was crafted at the dawn of the 17th century, shaped by complex social and geopolitical issues that new historicist critics, who seek to place literary works within a historical framework, have recently sought to unravel. Yet from its first staging to the present, Othello has also been among the few Shakespearean plays to be repeatedly staged to enthusiastic audiences, not only in England, but across the globe. 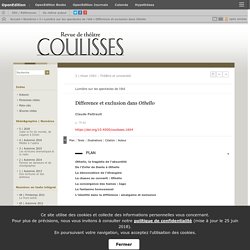