The story of Sarajevo’s Romeo and Juliet, 1993. Admira Ismic and Bosko Brckic pose for a picture after their high school graduation in 1985. 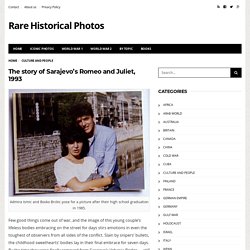 Few good things come out of war, and the image of this young couple’s lifeless bodies embracing on the street for days stirs emotions in even the toughest of observers from all sides of the conflict. Slain by snipers’ bullets, the childhood sweethearts’ bodies lay in their final embrace for seven days. By the time they were finally removed from Sarajevo’s Vrbanja Bridge — still entwined — they had become symbols of enduring love caught in a senseless war. This is the story of of Bosnia’s Romeo and Juliet. The Siege of Sarajevo (1992-1996), part of Yugoslavia’s Wars, was responsible for destroying lives, families and the future of many residents. As the Siege became progressively worse, those who could escape, did. Sarajevo during the siege.

A modern-day tale of Romeo and Juliet. Girl meets boy, her father disapproves. 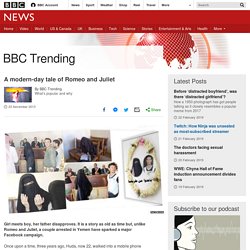 It is a story as old as time but, unlike Romeo and Juliet, a couple arrested in Yemen have sparked a major Facebook campaign. Once upon a time, three years ago, Huda, now 22, walked into a mobile phone shop in her home village in Saudi Arabia. She met Arafat, now 25, a Yemeni migrant worker from a much poorer family. Love blossomed. Arafat approached Huda's parents to ask for her hand, but was refused, according to the couple's lawyer. Huda then left home and crossed the border into Yemen disguised as a Yemeni worker. So far, so familiar. This time, there has been a huge reaction on Yemeni Facebook, with several pages and images of the couple being widely shared (one has 9,000 likes). 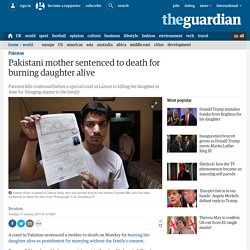 Parveen Bibi confessed before a special court in the city of Lahore to killing her daughter in June for what she said was “bringing shame to the family”. Police said 18-year-old Zeenat Rafiq married Hassan Khan and eloped to live with his family a week before she was killed. The court sentenced Rafiq’s brother Anees to life in prison after the evidence showed her mother and brother had first beaten her, before her mother threw kerosene on her and set her on fire.

After Rafiq’s murder in a poor district of Lahore, none of her relatives sought to claim her body, police said, leaving her husband’s family to bury her charred remains after dark in a graveyard near the city. Violence against women is rampant in Pakistan, according to the independent Human Rights Commission of Pakistan. Romeo & Juliet - The party kiss - Act I Scene V. Act 1, scene 5 - Prezi - The first time they meet. ROMEO AND JULIET, Act 1 Scene 5. Napkins: i.e., dish-towels. 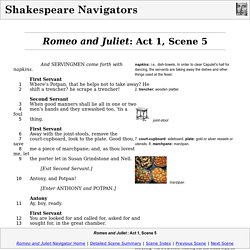 In order to clear Capulet's hall for dancing, the servants are taking away the dishes and other things used at the feast. And SERVINGMEN come forth with napkins. First Servant 1 Where's Potpan, that he helps not to take away? He 2. trencher: wooden platter. 2 shift a trencher? Second Servant 3 When good manners shall lie all in one or two joint-stool 4 men's hands and they unwashed too, 'tis a foul 5 thing.

First Servant 6 Away with the joint-stools, remove the 7. court-cupboard: sideboard. plate: gold or silver vessels or utensils. 8. marchpane: marzipan. marzipan 7 court-cupboard, look to the plate. [Exit Second Servant.] 10 Antony, and Potpan! [Enter ANTHONY and POTPAN.] Antony 11 Ay, boy, ready. First Servant 12 You are looked for and called for, asked for and 13 sought for, in the great chamber. Potpan 14 We cannot be here and there too. 15. the longer liver take all: he who lives the longest gets everything. 15 brisk awhile, and the longer liver take all. Romeo and Juliet-Zeffirelli-The balcony scene - vidéo Dailymotion.