EU Data Centres energy usage March 2021. Major Chinese Bank Selling Bonds Worth $3 Billion for Bitcoin – Bitcoin News. China Construction Bank, one of the “big four” banks in China, is selling $3 billion in bonds that can be paid for with bitcoin. 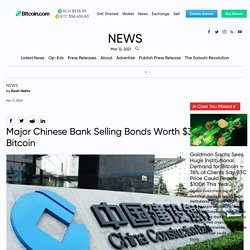 The bonds will be listed on a regulated Malaysian digital asset exchange. Beijing-based China Construction Bank (CCB) is selling $3 billion in bonds for bitcoin and U.S. dollars through its unit in Malaysia, the South China Morning Post reported Wednesday. This is the first digital security issued by a Chinese bank on a blockchain, the publication added, noting: The deal also allows investors to trade these China Construction Bank’s digital certificates using bitcoin on Fusang Exchange, a digital exchange licensed by the financial regulator in Labuan, Malaysia.

“The security would roll over every three months and pay annualized interest of Libor plus 50 basis points, or approximately 0.75%,” the publication conveyed, adding that trading will begin Friday. Update (Nov. 23, 2020, 3:28 a.m.) What do you think about China Construction Bank selling bonds for bitcoin? Bitcoin rise could leave carbon footprint the size of London's.

The surge in bitcoin’s price since the start of 2021 could result in the cryptocurrency having a carbon footprint the same as that of London, according to research. 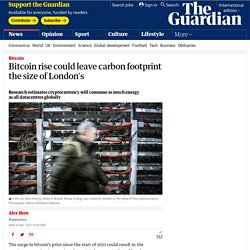 Alex de Vries, a Dutch economist, created the Bitcoin Energy Consumption Index, one of the first systematic attempts to estimate the energy use of the bitcoin network. By late 2017 he estimated the network used 30 terawatt hours (TWh) a year, the same as the whole of the Republic of Ireland. Now De Vries estimates the network uses more than twice – and possibly three times – as much energy: between 78TWh and 101TWh, or about the same as Norway. New bitcoins are created by “mining” coins, which is done by using computers to carry out complex calculations.

The more bitcoins there are, the longer it takes to mine new coin, and the more electricity is used in the process. Roughly 60% of the costs of bitcoin mining is the price of the electricity used, de Vries estimates. Critical Flaws in Millions of IoT Devices May Never Get Fixed. BOJ to begin experimenting with digital currency next year. TOKYO (Reuters) - The Bank of Japan said on Friday it would begin experimenting next year on how to operate its own digital currency, joining efforts by other central banks to catch up to rapid private-sector innovation. 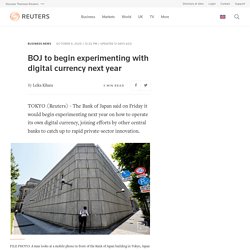 The move came in tandem with an announcement by a group of seven major central banks, including the BOJ, on what they see as core features of a central bank digital currency (CBDC) such as resilience and a clear legal framework. It also falls in line with new Japanese Prime Minister Yoshihide Suga’s focus on promoting digitalisation and administrative reform to boost the country’s competitiveness.

Smart City Index 2020 by IMD Business School. Singapore, Helsinki and Zurich have come top in the 2020 Smart City Index, in a year that saw many European cities fall in the rankings. 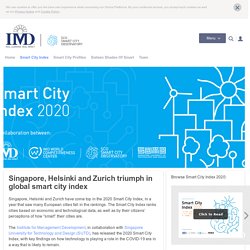 The Smart City Index ranks cities based on economic and technological data, as well as by their citizens’ perceptions of how “smart” their cities are. The Institute for Management Development, in collaboration with Singapore University for Technology and Design (SUTD), has released the 2020 Smart City Index, with key findings on how technology is playing a role in the COVID-19 era in a way that is likely to remain. Hundreds of citizens from 109 cities were surveyed in April and May 2020 and asked questions on the technological provisions of their city across five key areas: health and safety, mobility, activities, opportunities and governance.

Blockchain for trade finance: a network business. Trade finance has become one of the top focus issues for blockchain technology use. 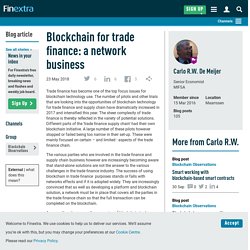 The number of pilots and other trials that are looking into the opportunities of blockchain technology for trade finance and supply chain have dramatically increased in 2017 and intensified this year. The sheer complexity of trade finance is thereby reflected in the variety of potential solutions. Different parts of the ‘trade finance supply chain’ had their own blockchain initiative. Fortnite World Cup: unexpected winners of the duo championship. Players have flown from all over the world to compete at the first ever Fortnite World Cup, a large sporting event at New York's Arthur Ashe tennis stadium with $30 million in cash prizes. 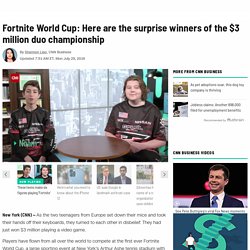 The epic tournament will determine this year's best Fortnite solo player Sunday and has already found this year's best duo team. Fortnite is a game that involves 100 players dropping onto a virtual island and fighting to be the last one standing while a health-point draining storm brews in the background. Aqua, 17, and Nyhrox, 16, lived through that storm. Fans and announcers were stunned late Saturday when Aqua and Nyhrox, two underdogs, beat out 49 other teams, many from larger, more funded organizations. Former BlackBerry CEO Balsillie calls on IMF to set standards for data usage. Jim Balsillie is warning that the rise of the data-driven global economy is increasing inequality by concentrating wealth in the hands of the few who control the technologies for gathering and processing it. 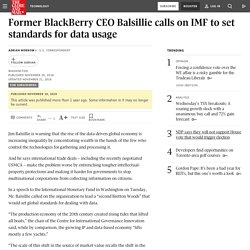 And he says international trade deals – including the recently negotiated USMCA – make the problem worse by entrenching tougher intellectual-property protections and making it harder for governments to stop multinational corporations from collecting information on citizens. In a speech to the International Monetary Fund in Washington on Tuesday, Mr. What is hot in technology trends 2018. Ransomware WannaCry: All you need to know. Is your computer vulnerable to attack from WannaCry ransomware? 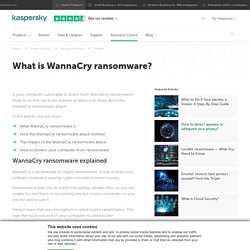 Read on to find out as we explore all there is to know about the WannaCry ransomware attack. In this article, you will learn: Global Fraud and Risk Report 2019/20. Mitigating business risk has always relied on knowledge of markets and counterparties, and of the forces that could disrupt a company’s agreements and assumptions. 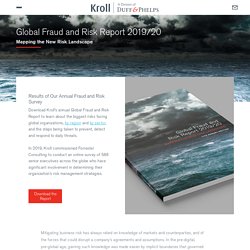 In the pre-digital, pre-global age, gaining such knowledge was made easier by implicit boundaries that governed the way most organizations conducted business. Suppliers, lenders and business partners were drawn from fairly well-established pools of referrals and contacts. Clearer categories for industries and sectors meant that enterprises knew their place in the larger economic ecosystem, enabling them to adopt and conform to established business models and vocabularies. Growth was often predicated on increasing a product’s existing market share or on moving into markets adjacent to those where a solid presence already had been established. Send Money Abroad with TransferWise. The service that thinks for you. Smart Home Home Connect lets you do much more than control your home intelligently. 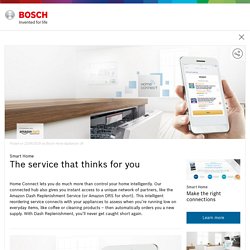 Our connected hub also gives you instant access to a unique network of partners, like the Amazon Dash Replenishment Service (or Amazon DRS for short). This intelligent reordering service connects with your appliances to assess when you’re running low on everyday items, like coffee or cleaning products – then automatically orders you a new supply. How Many People Have Smartphones Worldwide (Oct 2020) Video Gaming Industry & Its Revenue Shift. The video game industry is growing so fast that some believe it will reach over $300 billion by 2025. With billions of dollars in profit and over 2.5 billion gamers around the world, we can expect video game platforms to continue developing in 2020. Besides the consistent and impressive growth of the industry, it is interesting to note that there has been a shift in revenue sources in the gaming space lately.

The gaming industry used to make most of its money by selling games but today its revenue is coming from a different perspective. 10 predictions for smart city priorities in 2020. IoT projects will slow down and cities will have to decide if 5G is best for vehicle-to-infrastructure communication, IDC says. Over the next decade of smart cities work, there will be fewer IoT projects, more citizen input, and more communication between cars and infrastructure, according to the smart cities team at IDC. City leaders will build digital trust in new technology by setting clear data-use policies as the first step in the technology procurement process.

SEE: 5G: What it means for IoT (ZDNet/TechRepublic special feature) | Download the free PDF version (TechRepublic) Although climate change did not appear on the predictions list, Ruthbea Yesner, vice president worldwide government insights at IDC, said it is a huge driver of smart city work. "Cities are looking at how anything from communications to technology can build community resilience and help them respond and adapt to this changing environment," Yesner said.

Collective intelligence and the smart city. The trend for better use of data and technology in our urban environments has been gathering pace, but as 2020's global pandemic took hold we saw new combinations of people, technology and data enable innovative approaches to the crisis. The response to COVID-19 has offered valuable lessons for the use of technology in smart cities. Some studies predict that by 2023 as much as $189 billion will be spent worldwide on smart city initiatives. Microsoft Courts New Customers on the Farm: Cows. Drones are accelerating the speed of coronavirus testing in Ghana. Testing for coronavirus has been a struggle in Ghana. Apparently, health officials in the cities of Accra and Kumasi would wait for hours or even days for delivery trucks to visit rural medical facilities, collect batches of test samples, and then deliver them for analysis. The delivery time is now far shorter—thanks to drones. In April 2019, US-based startup Zipline launched a drone-delivery service in Ghana, using its fleet of fixed-wing drones to transport blood, vaccines, and other medical supplies to remote areas.

Chinese startup sows seeds of farm revolution with drones and AI. Feasibility funding for autonomous vehicle cyber security. Homepage - Connected Places Catapult. The Untold Story of NotPetya, the Most Devastating Cyberattack in History. How Robots are Changing Community Pharmacy - Reports suggest that nearly 70 per cent of community pharmacies in Denmark use automated or robotic dispensing technology. This figure drops to between 30 to 40 per cent across the rest of mainland Europe. Forget brain chips, live experiences are the future of entertainment. Next-Generation Connectivity - The Economist Intelligence Unit (EIU)

New robo-skin mimics human neuro architecture. Asia's tech champions zero in on main street banking. Tech firms set to give banks a run for their money. Technology firms have the potential to takeover how banking is done. Source: Shutterstock A NEW STUDY has found that more and more consumers feel positively about the potential disruption that technology will bring to the banking and finance sector. Fintech companies have long been heralded as bringing much needed disruption into the banking space, where asymmetrical information and high costs can act against the favor of consumers. What are the top eCommerce platforms in China? Assessing ICT global emissions footprint: Trends to 2040 & recommendations. Data centres of the world will consume 1/5 of Earth’s power by 2025. 08.0 EIOPA BoS17 165 EIOPA InsurTech Roundtable summary.

‘We don’t take cash’: is this the future of money?  How to kids to spot fake news: lessons from the news literacy project. Do students need to learn about fake news? And more generally, should they learn how news is created and how to evaluate its credibility? Thousands of schools all over the world believe the answer is yes. Over 3,300 educators from all 50 states in the US and 69 countries outside the US have adopted a curriculum to teach kids how to distinguish facts from fiction. Google's Internet-Beaming Balloons Will Soon Be Floating Over Puerto Rico.

The Lawsuit That Could Pop Alphabet’s Project Loon Balloons. - Loon. Next-Generation Connectivity - The Economist Intelligence Unit (EIU) A Digitally Caring Environment: The Internet of Things in Hospitals. What do hospital beds tell about patients? 'The goal is to automate us': welcome to the age of surveillance capitalism.