The Future of Social Relations

Eu.lohud. Digital Clones Could Cause Problems for Identity ... Three fundamental technologies -- chatbots, audio fakes, and deepfake videos -- have improved to the point that creating digital, real-time clones of people is merely a matter of integrating the systems. 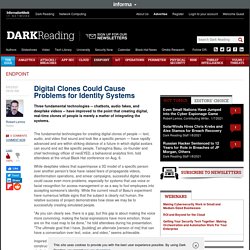 The fundamental technologies for creating digital clones of people — text, audio, and video that sound and look like a specific person — have rapidly advanced and are within striking distance of a future in which digital avatars can sound and act like specific people, Tamaghna Basu, co-founder and chief technology officer of neoEYED, a behavioral analytics firm, told attendees at the virtual Black Hat conference on Aug. 6. How close are we to a Black Mirror-style digital afterlife? When Roman Mazurenko was struck down by a car and killed just before his 33rd birthday, his “soulmate” Eugenia Kuyda memorialised him as a chatbot. 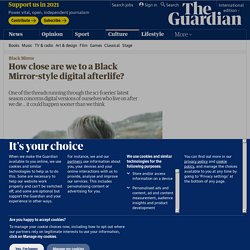 She asked his friends and family to share his old text messages and fed them into a neural network built by developers at her artificial intelligence startup, Replika. “I didn’t expect it to be as impactful. Usually I find showing emotions and thinking about grief really hard so I was mostly trying to avoid it. Talking to Roman’s avatar was facing those demons,” she told the Guardian. Elon Musk says humans must become cyborgs to stay relevant. Is he right? Humans must become cyborgs if they are to stay relevant in a future dominated by artificial intelligence. 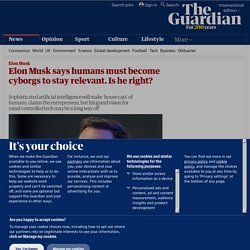 That was the warning from Tesla founder Elon Musk, speaking at an event in Dubai this weekend. Musk argued that as artificial intelligence becomes more sophisticated, it will lead to mass unemployment. NTT announces new R&D projects of Digital Twin Computing : NTT Press Releases : NTT HOME. 1.NTT’s Initiatives (Grand Challenges) In a future society where human diversity, complex social structures, and other uncertain global events are increasing, we will engage in the following four grand challenges to create a society with harmonized relationship among the Earth, a society, and a human. (1) Mind–to–Mind Communications This is a new form of communication that transcends differences in language, culture and individual characteristics such as experiences and sensitivities to enable direct understanding of each other’s perceptions and emotions. 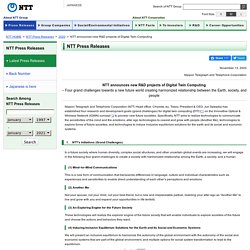 AlterEgo: a step towards symbiotic intelligence – IEEE Future Directions. Have you ever dreamt of voicing a question in your head and hearing the answer without anyone around you noticing it? 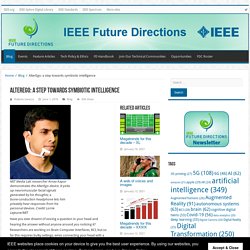 Researchers are working on Brain Computer Interfaces, BCI, but so far this requires bulky settings, wires connecting your head with a computer. Not exactly meeting the requirement of “unnoticed”. Apparently a team of researchers at MIT have discovered a shortcut to connect our thoughts to the Internet and sending back the answer to our queries to our brain. How Coronavirus Will Disrupt Future Colleges & Universities. Photo-Illustration: Joe Darrow In 2017, Scott Galloway anticipated Amazon’s $13.7 billion purchase of Whole Foods a month before it was announced. 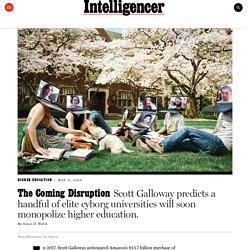 Last year, he called WeWork on its “seriously loco” $47 billion valuation a month before the company’s IPO imploded. Now, Galloway, a Silicon Valley runaway who teaches marketing at NYU Stern School of Business, believes the pandemic has greased the wheels for big tech’s entrée into higher education. The post-pandemic future, he says, will entail partnerships between the largest tech companies in the world and elite universities.

MIT@Google. iStanford. At the same time, more people than ever will have access to a solid education, albeit one that is delivered mostly over the internet. Can You Upload Your Mind & Live Forever? feat. Cyberpunk 2077. Web 2.0 to Social 3.0: The Next Big Thing. Being Mobile | Blog Web 2.0 to Social 3.0: The Next Big Thing Front page of the New York Times: Toyota and Google have built a site where individuals can come together — in real-time, simultaneously, synchronously: “The Collaborator website allows those in the conversation to customize the vehicle’s exterior color, interior fabric and textures, wheels, transmission and features, including moon roofs and fog lights. 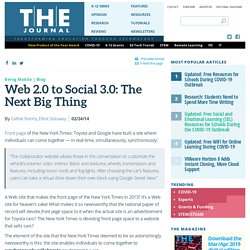 After choosing the car’s features, users can take a virtual drive down their own block using Google Street View.” US Digital Literacy. This work is licensed under a Creative Commons Attribution-NoDerivs 3.0 Unported License.Author: Samantha Penney, samantha.penney@gmail.comInteractive sites were added by Lichelle Leonard. 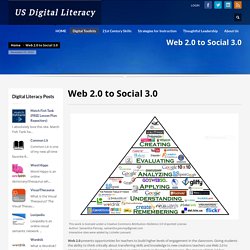 Web 2.0 presents opportunities for teachers to build higher levels of engagement in the classroom. Giving students the ability to think critically about transferring skills and knowledge to new creations teachers use Web 2.0 to encourage students to view themselves as active agents in the transfer process. The impact of Web 2.0 has instrumentally changed the way students learn and in return the way teachers must teach. The number of Web 2.0 tools continues to grow while utilization of these tools supports constructivist pedagogy. The interactive nature of these technologies lends itself well to collaborative learning, which motivates students, creates a “safer” learning environment, and enhances knowledge and skills.

That supports verbal voice and writing for two or more individuals synchronously. How To Use Social Learning In Elearning?