Transhumanism knocking on your door. Transhumanism in India: Between faith and modernity. The World Transhumanist Association (WTA) has provided a formal definition of transhumanism: "The intellectual and cultural movement that affirms the possibility and desirability of fundamentally improving the human condition through applied reason, especially by developing and making widely available technologies to eliminate aging and to greatly enhance human intellectual, physical, and psychological capacities. 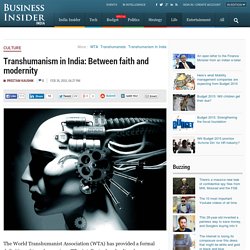 " Transhumanism: the Ultimate Annihilator. In his February 18 essay appearing in The Guardian, ‘How I Became an Erratic Marxist’, Greek Finance Minister Yanis Varoufakis cites his intermittent mentor, Karl Marx: “If the whole class of the wage-labourer were to be annihilated by machinery, how terrible that would be for capital, which, without wage-labour, ceases to be capital!” 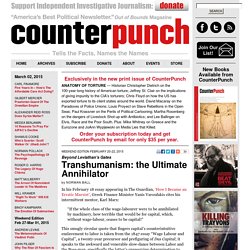 This smugly circular quote that fingers capital’s counterintuitive enslavement to labor is taken from the 1847 essay “Wage Labour and Capital”, a twenty-year precursor and prefiguring of Das Capital; it speaks to the awkward and venerable slow-dance between Labor and the Boss-man, specifically the latter’s unswerving determination to exploit surplus value until it ends in the annihilation of all parties. One wants to say, ‘silly communist, no capitalist is that stupid as to denude the market of consumers by annihilating them at their workstations.

What’s a consumer after all but a worker on his day off?’ Transhumanism Grew Rapidly in 2014. Singularity. 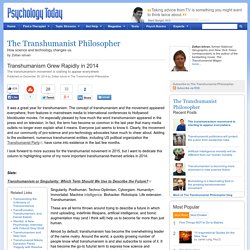 Posthuman. Techno-Optimism, Cyborgism. Humanity+. Immortalist. Machine intelligence. These are all terms thrown around trying to describe a future in which mind uploading, indefinite lifespans, artificial intelligence, and bionic augmentation may (and I think will) help us to become far more than just human. Almost by default, transhumanism has become the overwhelming leader of the name rivalry. Psychology Today: When Does Hindering Life Extension Science Become a Crime?

Every human being has both a minimum and a maximum amount of life hours left to live. An Irreverent Guide To Transhumanism And The Singularity. Ever since reading Bob Seidensticker's Future Hype: The Myths of Technology Change, I've been a skeptic of the whole exponentiating technology idea. 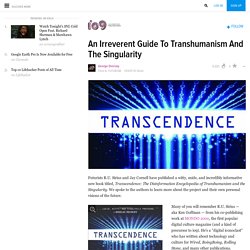 Which is to say, I do believe: that artificial life will become sapient and conscious one day.that Feynman's vision of mechanosynthesis and nanotechnology will implemented one day But I don't believe that either of these events will slide us into an exponential curve of change where the whole world becomes magic sweetness and light. Instead it will be the same old confusing, frustratingly inseparable ball of confusion it has always been. The world may be in various measurable ways better but there will also be unexpected problems that will arise. A New Generation of Transhumanists Is Emerging  A new generation of transhumanists is emerging. 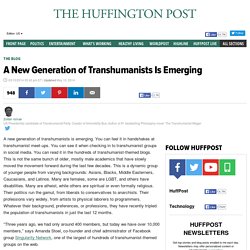 You can feel it in handshakes at transhumanist meet-ups. You can see it when checking in to transhumanist groups in social media. Human Swarming and the future of Collective Intelligence. It all goes back to the birds and the bees. 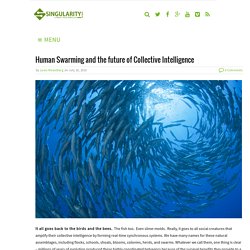 The fish too. Even slime-molds. Really, it goes to all social creatures that amplify their collective intelligence by forming real-time synchronous systems. We have many names for these natural assemblages, including flocks, schools, shoals, blooms, colonies, herds, and swarms. Whatever we call them, one thing is clear – millions of years of evolution produced these highly coordinated behaviors because of the survival benefits they provide to a great many species. For convenience I use the word “swarm” to refer to cohesive groupings of individual members, all working together as a unified dynamic system, their collective behavior tightly coordinated by real-time feedback loops. 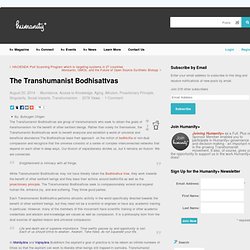 Rather than solely for themselves, the Transhumanist Bodhisattvas work to benefit everyone and establish a world of universal and beneficial abundance.The Bodhisattvas base their approach on the notion of bodhicitta or non-dual compassion and recognize that the universe consists of a series of complex interconnected networks that depend on each other in deep ways. Our illusion of separateness divides us, but it remains an illusion.

We are connected. Enlightenment is intimacy with all things. The Second Uncanny Valley. The "Uncanny Valley" is the evocative name for the commonplace reaction to realistic-but-not-quite-right simulated humans, robotic or animated. Most of us, when encountering such a simulacrum, have an instinctive "it's creepy" response, one that is enhanced when the sim is moving. Invented by roboticist Masahiro Mori, the Uncanny Valley concept is typically applied to beings (broadly conceived) as they become increasingly similar to humans in appearance and action. But what about beings as they become less similar to humans -- following the path of transhumans and, eventually, posthumans? An article in the latest issue of New Scientist (subscription required) prompted this question.