Slang — language at its most human. Slang is probably as old as human language, though the first slang dictionaries only started popping up in the 16th century. 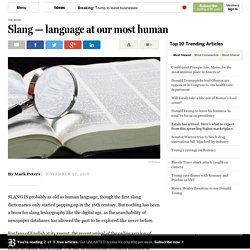 But nothing has been a boon for slang lexicography like the digital age, as the searchability of newspaper databases has allowed the past to be explored like never before. For fans of English at its rawest, the recent arrival of the online version of Green’s Dictionary of Slang is a major event. It’s also a reminder that slang — for all its sleaze and attitude — is just as susceptible to careful research as anything else. Advertisement. Forvo: the pronunciation dictionary. All the words in the world pronounced by native speakers. Search the database of 20,000 Phrases and Sayings. Learn Spanish, French, German, Portuguese, Italian and English for free. Ngram Viewer. Google – The first Google image for every word in the dictionary. If a picture says more than a thousand words – and current internet dynamics tend to agree – what would a visual guide to the English vocabulary, contemporary and ‘webresentative’, look like? 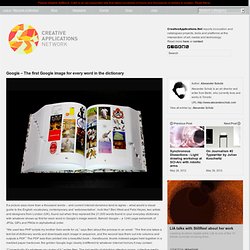 Ben West and Felix Heyes, two artists and designers from London (UK), found out when they replaced the 21,000 words found in your everyday dictionary with whatever shows up first for each word in Google’s image search. Behold Google – a 1240 page behemoth of JPGs, GIFs and PNGs in alphabetical order. “We used two PHP scripts my brother Sam wrote for us,” says Ben about the process in an email. “The first one takes a text list of dictionary words and downloads each image in sequence, and the second lays them out into columns and outputs a PDF.” The PDF was then printed into a beautiful book – handbound, thumb indexed pages held together in a marbled paper hardcover, the golden Google logo clearly indifferent to whatever internet horrors it may contain. via Crap = Good.

Visuwords™ online graphical dictionary and thesaurus. Online Etymology Dictionary. The true story of 'true' - Gina Cooke. Etymology is an area of linguistic science; it's the study of the origin of words and the ways in which their meanings and usages have changed over time. 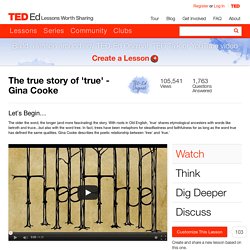 The etymology of a specific word traces the historical development of its meaning. Etymological study relies on attested forms -- that is, words as they were attested in writing throughout history. Because of this reliance on attested (written) forms, the study of English etymology helps explain why some words are written the way they are. Why is English Spelling So Weird? Neil Ramsden - Morphology Micro-site. * We're aiming to create paid-for versions of Word Microscope and Mini Matrix-Maker, but demonstration and test versions can be used for free. 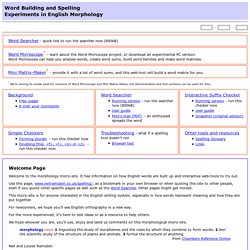 Welcome to the morphology micro-site. It has information on how English words are built up and interactive web-tools to try out. Use this page, www.neilramsden.co.uk/spelling/, as a bookmark in your own browser or when quoting this site to other people, even if you quote other specific pages as well such as the Word Searcher. Other pages might get moved. This micro-site is for anyone interested in the English writing system, especially in how words represent meaning and how they are put together.

Latin Dictionary and Grammar Resources - Latdict. SMS Dictionary. Linguist Explains That Txting Isn't Ruining Spelling Or The English Language. Urban Dictionary. A Historical Dictionary of American Slang - alphaDictionary.com. OneLook Dictionary Search. Free online Dictionary of English Pronunciation - How to Pronounce English words. Erin McKean redefines the dictionary. The Role of a Dictionary. Draft is a series about the art and craft of writing. 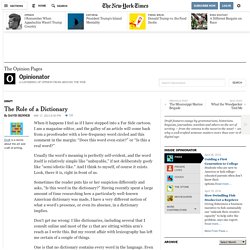 When it happens I feel as if I have stepped into a Far Side cartoon. I am a magazine editor, and the galley of an article will come back from a proofreader with a low-frequency word circled and this comment in the margin: “Does this word even exist?” Or “Is this a real word?” Usually the word’s meaning is perfectly self-evident, and the word itself is relatively simple like “unbuyable,” if not deliberately goofy like “semi-idiotic-like.” And I think to myself, of course it exists. Sometimes the reader puts his or her suspicion differently and asks, “Is this word in the dictionary?”

Don’t get me wrong: I like dictionaries, including several that I consult online and most of the 11 that are sitting within arm’s reach as I write this. One is that no dictionary contains every word in the language. Wordnik: All the Words. Wordnik’s Online Dictionary - No Arbiters, Please. Not Wordnik, the vast online dictionary. 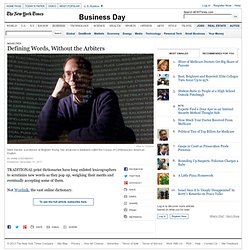 No modern-day Samuel Johnson or Noah Webster ponders each prospective entry there. Instead, automatic programs search the Internet, combing the texts of news feeds, archived broadcasts, the blogosphere, Twitter posts and dozens of other sources for the raw material of Wordnik citations, says Erin McKean, a founder of the company. Then, when you search for a word, Wordnik shows the information it has found, with no editorial tinkering. Instead, readers get the full linguistic Monty. “We don’t pre-select and pre-prune,” she said. Synonym Finder » Find synonyms, antonyms & definition for (almost) any word. 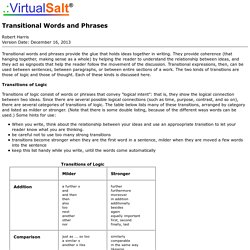 They provide coherence (that hanging together, making sense as a whole) by helping the reader to understand the relationship between ideas, and they act as signposts that help the reader follow the movement of the discussion. Transitional expressions, then, can be used between sentences, between paragraphs, or between entire sections of a work. The two kinds of transitions are those of logic and those of thought. Each of these kinds is discussed here. Transitions of Logic Transitions of logic consist of words or phrases that convey "logical intent": that is, they show the logical connection between two ideas. 15,000 Useful Phrases. Expand your vocabulary! Free Rice. Test Your Vocabulary.