German accountant Matthäus Schwarz prefigured the selfie blogger craze by 500 years with his fashion diary. Long before the likes of Tavi Gevinson and Bryanboy made careers of taking fashion selfies, a German accountant was busy documenting his outfits: for 40 years in the 16th century, Matthäus Schwarz commissioned watercolour portraits to showcase his daily ensembles, leaving us with the most extraordinary record of Renaissance style, gathered together in his Trachtenbuch (literally, "book of clothes".) 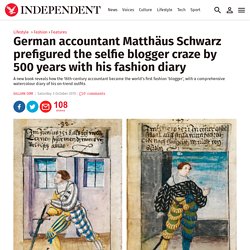 Born in Augsburg in 1497, Schwarz began to record his sartorial successes – and failures – from the age of 23, using three principal artists. The collection of 137 miniature paintings (including 36 that drew on his memory of what he'd looked like from childhood, to reconstruct his earlier years) is kept in a museum in Brunswick in northern Germany. "It was incredibly unusual for the time," says Professor Maria Hayward, who co-edited The First Book of Fashion, a new book in which the paintings are recreated. The British Library’s albums. Book of Kells. Title: Book of Kells Name(s): Department: Item No. 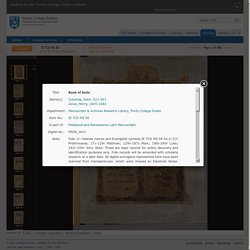 Untitled. An intensely illustrated florilegium of meditations and prayers drawing from Song of Songs and Augustine’s De Trinitate, among other texts, the Rothschild Canticles is remarkable for its full-page miniatures, historiated initials, and drawings, which show the work of multiple artists. 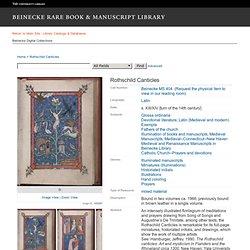 Guide Rouen Hours c.1460-75. THE BRITISH LIBRARY - The world's knowledge. Schøyen Collection. I.33. The Atlas of Early Printing - The University Of Iowa Libraries. The British Library Digital Catalogue of Illuminated Manuscripts. You can • perform a quick search (this searches for a word or number in all sections of each catalogue entry, including images); • perform a simple search using keywords and dates; • look for information about a particular manuscript if you know its collection name and manuscript number; • perform an advanced search using different types or combinations of information; • explore the virtual exhibitions of various aspects of the British Library's western illuminated manuscript holdings; and • check the illustrated glossaries of terms. • download digital images for further reuse such as in educational contexts, placing on your blog or sharing with others. 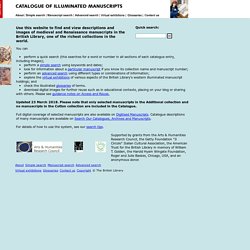 Please see guidance notes on Access and Reuse. Updated 15 January 2016. Please note that cataloguing of manuscripts in the Additional collection is in progress, and that manuscripts in the Cotton collection are not yet included in the Catalogue. Medieval chronicles, sources, texts, historical accounts and studies related to medieval history. Manuscript Miniatures: Search. 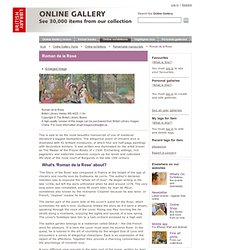 For more information email imagesonline@bl.uk This is said to be the most beautiful manuscript of one of medieval literature’s biggest bestsellers. The allegorical poem of chivalric love is illustrated with 92 brilliant miniatures, of which four are half-page paintings with decorative borders. It was written and illuminated by the artist known as The Master of the Prayer Books of c.1500. Enchanting settings, rich pageantry and elaborate costumes conjure up the lavish and cultivated life-style of the royal court of Burgundy in the late 15th century. Special collections. Digitized books. Introduction. Update Information 2006: In 2006 the Internet Medieval Sourcebooks and associated sourcebooks are undergoing a major overhaul to remove bad links and add more documents. 2.

This project is both very large and fairly old in Internet terms. At the time it was instigated (1996), it was not clear that web sites [and the documents made available there] would often turn out to be transient. As a result there is a process called "link rot" - which means that a "broken link" is a result of someone having taken down a web page. 2. 3.