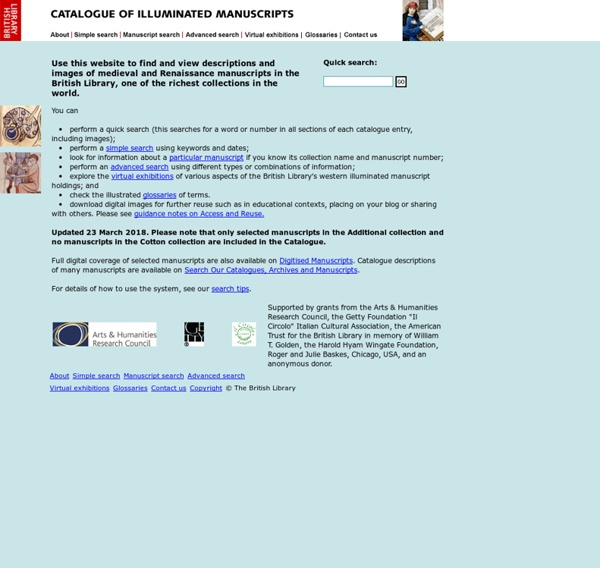 You can • perform a quick search (this searches for a word or number in all sections of each catalogue entry, including images); • perform a simple search using keywords and dates; • look for information about a particular manuscript if you know its collection name and manuscript number; • perform an advanced search using different types or combinations of information; • explore the virtual exhibitions of various aspects of the British Library's western illuminated manuscript holdings; and • check the illustrated glossaries of terms. • download digital images for further reuse such as in educational contexts, placing on your blog or sharing with others. Please see guidance notes on Access and Reuse. Updated 23 March 2018. Please note that only selected manuscripts in the Additional collection and no manuscripts in the Cotton collection are included in the Catalogue. Full digital coverage of selected manuscripts are also available on Digitised Manuscripts.

Guide Rouen Hours c.1460-75 |New Files| |Dismembered Manuscripts| |CHD Guides| |Tutorial| |Books of Hours| |Incunabula| |Calendars| |CHD Miscellanea| Credit must here be given to David Carlson and the D&D Galleries in Somerville, who, on the request of students and scholars, has left a 9Mb directory on his webserver without prospect of any commercial profit. Salute and respect to this high class of sales promotion. May it be an inspiration for other commercial dealers in medieval manuscripts.

Beautiful Handwriting, Lettering and Calligraphy - Smashing Magazine Advertisement Handwriting seems to have lost some of its attraction over the last years. Nobody writes beautiful handwritten letters, and uses digital means of communication with smileys, abbreviations and standard lettering instead. And that’s a pity. Since handwriting is unique, it has a tremendous expressive power a standard lettering isn’t able to achieve.

untitled An intensely illustrated florilegium of meditations and prayers drawing from Song of Songs and Augustine’s De Trinitate, among other texts, the Rothschild Canticles is remarkable for its full-page miniatures, historiated initials, and drawings, which show the work of multiple artists. See: Hamburger, Jeffrey. 1990. The Rothschild canticles: Art and mysticism in Flanders and the Rhineland circa 1300. New Haven: Yale University Press. Manuscript on parchment (uneven quality, severely trimmed) of a Florilegium comprised of a series of meditations and prayers.

Harvard The Houghton Library’s distinguished collection of medieval and Renaissance manuscripts represents a significant resource for the study of the Middle Ages and the Renaissance in Western Europe. Assembled through gifts and purchase over the past two centuries, this collection includes works in Latin, Greek, and most of the vernacular languages of Europe that are the primary sources for the study of the literature, art, history, music, philosophy, and theology of the periods. This Web site provides strategies for searching Houghton's medieval manuscripts as well as links to bibliographies related to these materials that were compiled by the Library. Permission to publish from any manuscript is granted at the discretion of the Curator. See Houghton's Reproductions and Permissions page for more information.

Roman de la Rose Roman de la RoseBritish Library Harley MS 4425, f.14vCopyright © The British Library BoardA high-quality version of this image can be purchased from British Library Images Online. For more information email imagesonline@bl.uk This is said to be the most beautiful manuscript of one of medieval literature’s biggest bestsellers. More Gothic Writing: Capital Gothic Letters A-Z The CAPITAL gothic writing tutorial below is presented from A-Z – assuming you already know how to manipulate a calligraphy pen for lower-case gothic letters. If not, you may want to try out some of the other Gothic pages first ... Helpfully, the following particular gothic alphabet contains many similar forms, so once you've learned one letter, chances are you'll find others easier. Useful info about gothic majuscules

Glasgow Medieval manuscripts Middle English Literature: Medical manuscripts: Introduction Update Information 2006: In 2006 the Internet Medieval Sourcebooks and associated sourcebooks are undergoing a major overhaul to remove bad links and add more documents. 2. This project is both very large and fairly old in Internet terms. Learn Calligraphy from a teacher of the art of fine handwriting Welcome to Chuck McGavren's web site celebrating the art of fine handwriting. Learn how to be a real calligrapher over the internet. Just get a calligraphy pen, some scratch paper and practice. In no time you will get requests to letter certificates, address envelopes, write special messages and prepare poetry and other items fine enough for framing. Now, it's time to learn one of the fastest ways to make your handwriting more interesting. Ready for the first lesson?

Codex Gigas The Codex Gigas or the Devil’s Bible at the National Library in Stockholm is famous for two features. First, it is reputed to be the biggest surviving European manuscript. (Codex Gigas means ‘giant book’.) Secondly, it contains a large, full page portrait of the Devil. This site contains a digitised version of every page of the manuscript as well as commentaries on its history, texts, script, initials and decoration. Book of Kells Title: Book of Kells Name(s): Department: German accountant Matthäus Schwarz prefigured the selfie blogger craze by 500 years with his fashion diary Long before the likes of Tavi Gevinson and Bryanboy made careers of taking fashion selfies, a German accountant was busy documenting his outfits: for 40 years in the 16th century, Matthäus Schwarz commissioned watercolour portraits to showcase his daily ensembles, leaving us with the most extraordinary record of Renaissance style, gathered together in his Trachtenbuch (literally, "book of clothes".) Born in Augsburg in 1497, Schwarz began to record his sartorial successes – and failures – from the age of 23, using three principal artists. The collection of 137 miniature paintings (including 36 that drew on his memory of what he'd looked like from childhood, to reconstruct his earlier years) is kept in a museum in Brunswick in northern Germany. "It was incredibly unusual for the time," says Professor Maria Hayward, who co-edited The First Book of Fashion, a new book in which the paintings are recreated. Matthäus Schwarz's fashion diary

Textmanuscripts This is a fine example of a writing-master’s manuscript copy-book; two of the samples are signed by Pierre Ioosten en Hanna, and many are dated 1630 and 1633. Included are twenty-six full-page writing samples, copied on the recto only, which display the writing-master’s equally virtuosic skill in handling numerous different types of scripts in several languages, as well as elaborate initials and other decorative pen-work. This represents the rare opportunity to acquire a copy-book by an expert scribe and artist who is apparently otherwise undocumented. PROVENANCE1. Written and decorated by the writing-master who signs his name “Pierre Ioosten, 1630” in the roundel of the Lord’s Prayer at the top of f. 14, and at the bottom of f. 15, “Escript par moy Pierre Ioosten en Hanna, Anno domini 1630.”

Amazing work of Irina Vinnik If you haven’t already looked at her other work, click here. Below is a collection of her sketchs from her infamous sketchbook. Enjoy! Come across any awesome art lately?