Bacteria in the Gut May Alter Aging Process. An international research team led by Nanyang Technological University, Singapore (NTU Singapore) has found that microorganisms living in the gut may alter the aging process, which could lead to the development of food-based treatment to slow it down. 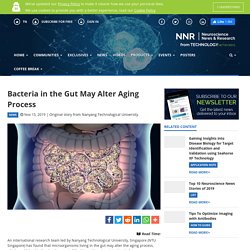 All living organisms, including human beings, coexist with a myriad of microbial species living in and on them, and research conducted over the last 20 years has established their important role in nutrition, physiology, metabolism and behavior. Using mice, the team led by Professor Sven Pettersson from the NTU Lee Kong Chian School of Medicine, transplanted gut microbes from old mice (24 months old) into young, germ-free mice (6 weeks old).

After eight weeks, the young mice had increased intestinal growth and production of neurons in the brain, known as neurogenesis. The team showed that the increased neurogenesis was due to an enrichment of gut microbes that produce a specific short chain fatty acid, called butyrate. Reference. Another Study Suggests Exercise Provides Great Benefits for Aging Brain. Exercise seems to endow a wealth of benefits, from the release of happiness-inducing hormones to higher physical fitness. 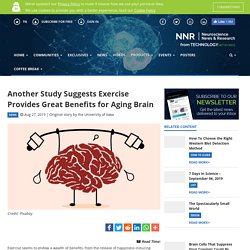 New research shows it may provide a boost to the mind too. University of Iowa researchers have found that a single bout of exercise improves cognitive functions and working memory in some older people. In experiments that included physical activity, brain scans, and working memory tests, the researchers also found that participants experienced the same cognitive benefits and improved memory from a single exercise session as they did from longer, regular exercise.

“One implication of this study is you could think of the benefits day by day,” says Michelle Voss, assistant professor in the Department of Psychological and Brain Sciences and the study’s corresponding author. “In terms of behavioral change and cognitive benefits from physical activity, you can say, ‘I’m just going to be active today. Previous research has shown exercise can confer a mental boost. Pomegranate compound with anti-aging effects passes human trial. Urolithin A, a metabolite of biomolecules found in pomegranates and other fruits, could help slow certain aging processes. 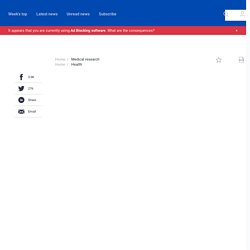 EPFL spin-off Amazentis, in conjunction with EPFL and the Swiss Institute of Bioinformatics, has published a paper in the journal Nature Metabolism outlining the results of their clinical trial. It is a fact of life that skeletal muscles begin to lose strength and mass once a person reaches the age of 50. A recent clinical trial involving two EPFL entities—spin-off Amazentis and the Laboratory of Integrative Systems Physiology (LISP) – showed that urolithin A, a compound derived from biomolecules found in fruits such as pomegranates, could slow down this process by improving the functioning of mitochondria—the cells' powerhouses. Eating Chocolate and Drinking Red Wine Could Help Prevent Aging, According to a Study - Healthy Food House.

The numerous benefits of red wine and dark chocolate are believed to be a result of the presence of a natural chemical called resveratrol. 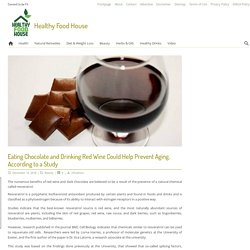 Resveratrol is a polyphenic bioflavonoid antioxidant produced by certain plants and found in foods and drinks and is classified as a phytoestrogen because of its ability to interact with estrogen receptors in a positive way. Studies indicate that the best-known resveratrol source is red wine, and the most naturally abundant sources of resveratrol are plants, including the skin of red grapes, red wine, raw cocoa, and dark berries, such as lingonberries, blueberries, mulberries, and bilberries. However, research published in the journal BMC Cell Biology indicates that chemicals similar to resveratrol can be used to rejuvenate old cells. Fasting Molecule Delays Vascular Aging. A molecule produced during fasting or calorie restriction has anti-aging effects on the vascular system, which could reduce the occurrence and severity of human diseases related to blood vessels, such as cardiovascular disease, according to a study led by Georgia State University. 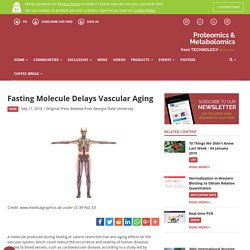 “As people become older, they are more susceptible to disease, like cancer, cardiovascular disease and Alzheimer’s disease,” said Dr. Ming-Hui Zou, senior author of the study, director of the Center for Molecular and Translational Medicine at Georgia State and a Georgia Research Alliance Eminent Scholar in Molecular Medicine. “Age is the most important so-called risk factor for human disease. How to actually delay aging is a major pathway to reducing the incident and severity of human disease. “The most important part of aging is vascular aging. The researchers identified an important, small molecule that is produced during fasting or calorie restriction conditions. These anti-aging pills seem to be actually working.

Pills hailed as the first real “anti-aging” drugs inched a little closer to the market after a study found they cut the number of respiratory infections in the elderly by half. 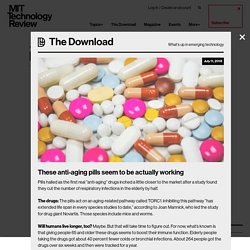 The drugs: The pills act on an aging-related pathway called TORC1. Inhibiting this pathway “has extended life span in every species studies to date,” according to Joan Mannick, who led the study for drug giant Novartis. Those species include mice and worms. Will humans live longer, too? Maybe. The next aspirin? Who is involved: Although the study was carried out at Novartis, the drugs were sold last year to resTORbio, a startup in Cambridge, Massachusetts, that recently went public and was cofounded by Mannick.