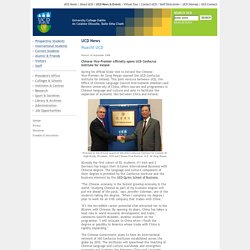 This joint venture between UCD, the Office of Chinese Language Council International (Hanban) and Renmin University of China, offers courses and programmes in Chinese language and culture and aims to facilitate the expansion of economic ties between China and Ireland. Pictured at the official launch of the UCD Confucius Institute for Ireland: Dr Hugh Brady, President, UCD and Chinese Vice-Premier, H.E. Mr Zeng Peiyan Already the first cohort of EU students (11 Irish and 2 German) has begun their B.Comm International Business with Chinese degree. ‘The Chinese economy is the fastest growing economy in the world. ‘It’s the incredible career potential that attracted me to the BComm with Chinese. The Chinese Government plans to have an international network of 100 Confucius Institutes established across the globe by 2010. 16/12/2013 China to invest €300m to establish UCD-Yantai.

- NovaUCD Shandong be the centrepiece for an innovation-intensive campus - Innovation-focused international university will provide pipeline of students to Ireland and support Irish enterprises seeking foothold in China China has committed to provide University College Dublin (UCD) with an unprecedented investment of €300 million and a 300 acre (121 hectare) campus to establish a new international university in the scenic coastal city of Yantai (population ca. 8 million) in the province of Shandong (population ca. 95 million). 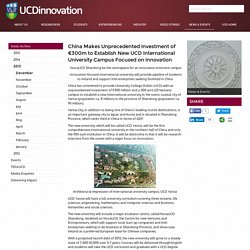 Yantai City, in addition to being one of China’s leading tourist destinations, is an important gateway city to Japan and Korea and is situated in Shandong Province, which ranks third in China in terms of GDP. UCD to get €300m campus in China. The city government of Yantai in northeast China will provide €300 million and a 300-acre campus to set up a University College Dublin campus which will focus on innovation, provide a pipeline of students to Ireland and support Irish enterprises seeking a foothold in China. 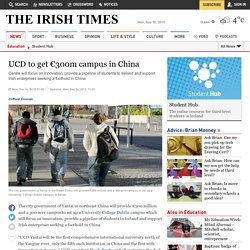 “UCD Yantai will be the first comprehensive international university north of the Yangtze river, only the fifth such institution in China and the first with innovation at its core,” UCD president Hugh Brady said after signing the deal at a ceremony in Yantai. The new university will be a joint venture with China Agricultural University (CAU). The project is planned to launch in 2015. Dr Brady spoke of the importance of the China-Ireland relationship: “China’s pace of development is breathtaking and UCD Yantai provides Ireland with a new bridgehead into one of China’s most economically vibrant provinces.” 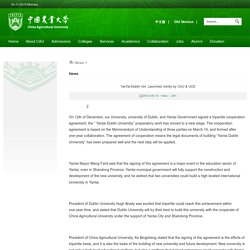 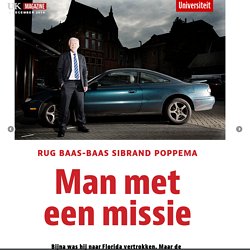 He’s the visionary behind the learning communities and the ‘flipping the classroom’ method. According to Mazur, education is not simply a transfer of information. The important step is assimilating that information and applying it to a different context. But that doesn’t happen in most lectures. In his classes, students think about a question in silence and, afterwards, discuss it together. Google Maps. China gaat langste tunnel bouwen. 25/03/2015 RUG in China. In short. 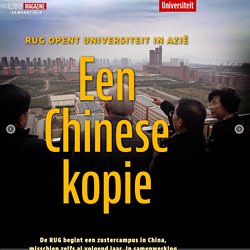 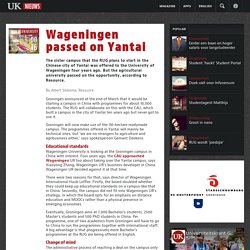 But the agricultural university passed on the opportunity, according to Resource. By Albert Sikkema, Resource Groningen announced at the end of March that it would be starting a campus in China with programmes for about 10,000 students. The RUG will collaborate on this with the CAU, which built a campus in the city of Yantai ten years ago but never got to use it. Groningen will now make use of the 110-hectare readymade campus. 04-05-2015 Personnel question Yantai.

The Personnel Faction of the University Council and the faculty council of Economics and Business both formally submitted questions to president Sibrand Poppema about the Yantai plans. 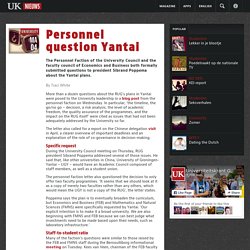 By Traci White More than a dozen questions about the RUG’s plans in Yantai were posed to the University leadership in a blog post from the personnel faction on Wednesday. In particular, ‘the timeline, the go/no go – decision, a risk analysis, the level of academic freedom, the quality assurance of the programmes, and the impact on the RUG itself’ were cited as issues that had not been adequately addressed by the University so far. The letter also called for a report on the Chinese delegation visit in April, a clearer overview of important deadlines and an explanation of the role of co-governance in decision-making.

18-05-2015 'Don't mention the torture' The RUG signed an Agreement of Collaboration with King Saud University to become their first Dutch partner last week. 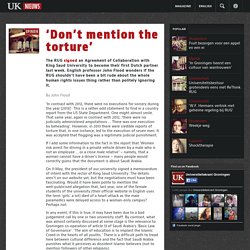 English professor John Flood wonders if the RUG shouldn’t have been a bit rude about the whole human rights issues thing rather than politely ignoring it. By John Flood ‘In contrast with 2012, there were no executions for sorcery during the year [2013]’. This is a rather odd statement to find in a country report from the US State Department. 27-05-2015 Math and Science concerns about Yantai. Members of the Faculty of Mathematics and Natural Sciences council and chemistry programme director Dirk Slotboom have expressed concerns about the Yantai plans. 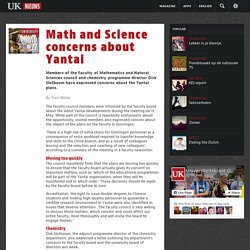 By Traci White The faculty council members were informed by the faculty board about the latest Yantai developments during the meeting on 13 May. 08-06-2015 Yantai to kick off with Math and Natural Sciences. Classes from at least three programmes from the Faculty of Mathematics and Natural Sciences are likely to be among the first taught at the international branch campus in Yantai. By Traci White According to several members of the Faculty of Mathematics and Natural Sciences, three programmes – Life Science & Technology, Industrial Engineering & Management and Chemistry – appear to be among the first courses the RUG plans to teach in China. List of ‘firsts’ Dirk Slotboom, director of the Chemistry department, reported via email, ‘As far as I know, Chemistry is still on the list of ‘firsts’.’ Recently, Slotboom submitted a letter to the faculty and university boards, requesting more information with regard to the branch campus plans.

Although sources say that Life Science & Technology is on the list to be exported to the Chinese campus, adjunct programme director Louis van de Zande will not yet confirm that. Additional challenge ‘Too early to confirm’ 01-06-2015 FEB creates a Yantai Advisory Board. The Faculty of Economics and Business board has created an advisory board in preparation for the branch campus plans in China. By Traci White The group, consisting of three FEB faculty members, includes professor Tom Wansbeek and associate dean of international affairs, Frans Rutten. The third member, Beppo van Leeuwen, is the coordinator for two of the FEB programmes that will be going to Yantai: Economics and Business Economics, and International Economics and Business.

‘Wildly interesting but complex’ Wansbeek says that the advisory board is in the very earliest stages of their work, effectively starting ‘from zero’. 2 JUNI 2015 China reageert voorzichtig positief. 16-06-2015 Go/no-go decision on Yantai scheduled for October. A ‘go/no-go’ decision for the Yantai branch campus plans is scheduled for 19 October, according to a time line for the collaboration with China Agricultural University. By Traci White The document will be discussed in the University Council next week. The university’s go/no-go decision – effectively a pass/fail – is scheduled for October. A faculty-level finding for the decision should be made by the FEB advisory board on 15 September. 17-06-2015 Secret meeting with China. RUG spokesperson Gernant Deekens confirms that RUG president Sibrand Poppema had a secret audience with a Chinese vice minister of education and Dutch Minister of Education Jet Bussemaker on Tuesday. What they discussed is confidential. By Traci White ‘I have to say honestly that I only heard about it fairly late myself, and I can’t say anything about what was discussed there’, Deekens says.

‘It is confidential, and that is all that I can say.’ Yantai The meeting was part of a Sino-Dutch Education Policy Dialogue held on Tuesday in The Hague. 22-06-2015 Having a say on Yantai. The faculty councils and University Council may ultimately not have the opportunity to vote specifically on pursuing an international branch campus in Yantai. That is cause for concern for representatives across the RUG. By Traci White That is according to a document from the RUG board of directors about codetermination in the branch campus plans to be discussed in the University Council this week. The document emphasises that the board of directors of Dutch universities are not required by higher education law to consult co-determination bodies within their institutions about starting new academic programmes or branch facilities.

Right to consent. 24-06-2015 Student factions want more information on Yantai. Student members of the faculty councils of Mathematics & Natural Sciences and Economics & Business are dissatisfied with the amount of information they have been given about the Yantai plans so far. 25-06-2015 Uraad stemt voor campus in Yantai.

25-06-2015 Groningen not mandatory for Chinese students. Based upon a pending governmental decree, Chinese students from the Yantai campus will not be required to come to Groningen in order to get a degree from the RUG. By Traci White That was announced during a meeting on Wednesday afternoon about the latest developments in the Yantai branch campus plans.

A mix of around 60 staff members and students were present at the meeting in the Geertsema Hall in the Academy building to hear from professor Ming Cao and president Sibrand Poppema. 03-09-2015 Onderzoek in Yantai voor de industrie.