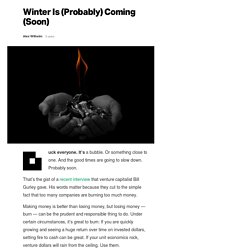 It’s a bubble. Or something close to one. And the good times are going to slow down. Probably soon. That’s the gist of a recent interview that venture capitalist Bill Gurley gave. Making money is better than losing money, but losing money — burn — can be the prudent and responsible thing to do. But not all burns are equal: Your burn isn’t my burn or their burn. Gurley isn’t the only venture capitalist who is irked that some startups are spending like Croesus while generating newspaper-like revenues. We have multiple portfolio companies burning multiple millions of dollars a month. Yes. Gurley points out that losing millions per month is the new normal.

It’s Groupon’s early days all over again. Gurley hits on the idea of risk repeatedly. The underlying point of Gurley’s and Wilson’s respective riffs is that many companies will have to reduce their burn in the future. Cash is the oxygen of business. This works precisely until it doesn’t. Welcome To The Unicorn Club: Learning From Billion-Dollar Startups. Editor’s note: Aileen Lee is founder of Cowboy Ventures, a seed-stage fund that backs entrepreneurs reinventing work and personal life through software.

Some very important ratios here: about 0.5% of funded startups become large companies (unicorns) of wich only 2% reach Google-like scale (superunicors). Which give the amazing ratio of 1 Google-like companie for every 10.000 funded tech startups. In other word, the answer to the classical question "how do you pick the next Google?" is pretty straithforward: "you should invest in 10.000 (good) tech startups" – Patrice 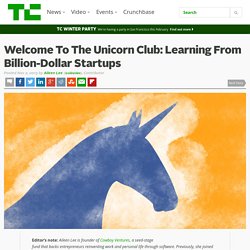 Follow her on Twitter @aileenlee. Many entrepreneurs, and the venture investors who back them, seek to build billion-dollar companies. Why do investors seem to care about “billion dollar exits”? Historically, top venture funds have driven returns from their ownership in just a few companies in a given fund of many companies. So, we wondered, as we’re a year into our new fund (which doesn’t need to back billion-dollar companies to succeed, but hey, we like to learn): how likely is it for a startup to achieve a billion-dollar valuation?

To answer these questions, the Cowboy Ventures team built a dataset of U.S. Learnings to date about the “Unicorn Club”: So, what does this all mean? Waiting for the Accelerator Bubble to Pop. Since Paul Graham launched Y Combinator in 2005, the field of startup incubators and accelerators has exploded in the U.S. and overseas, with new entries emerging in all manner of oddball shapes and sizes, from a 80,000-square-foot space in San Jose, Calif., dedicated to tech companies hoping to do business in China, to a program that offers entrepreneurs cash to develop their business in Chile. 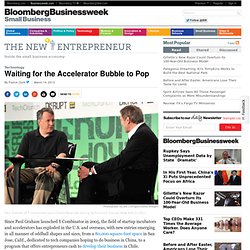 There are accelerators for green tech, health tech, ed tech, the cloud, and every other tech flavor du jour, and accelerators everywhere from Baton Rouge to Durham, N.H., as cities across the country lay claim to the title of the Silicon Valley of [insert industry here]. There’s Unreasonable at Sea, a 100-day program on an ocean liner, which encourages entrepreneurs to “combat the greatest challenges of our time” while sailing among ports in 13 countries.

The result is that venture capitalists have begun to predict that accelerators are going to fail. There are already signs of paring back. (4) Startups: How to Communicate Traction... by Brendan Baker. Venture Hacks - Good advice for startups. The Venture Hacks Bible - Sample. What To Look For In A Company Board. At any company level, the board of directors has a direct impact on the organization’s product strategy, hiring, fundraising and much more. 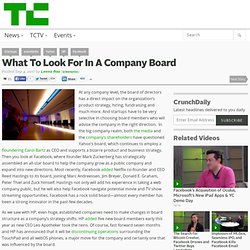 And startups have to be very selective in choosing board members who will advise the company in the right direction. In the big company realm, both the media and the company’s shareholders have questioned Yahoo’s board, which continues to employ a floundering Carol Bartz as CEO and supports a bizarre product and business strategy. Then you look at Facebook, where founder Mark Zuckerberg has strategically assembled an all-star board to help the company grow as a public company and expand into new directions.

Most recently, Facebook added Netflix co-founder and CEO Reed Hastings to its board, joining Marc Andreessen, Jim Breyer, Donald E. Graham, Peter Thiel and Zuck himself. As we saw with HP, even huge, established companies need to make changes in board structure as a company’s strategy shifts. Photo Credit/Flickr/Gibffe. The Misfit Economy.