Bare Conductive Paint Allows You to Draw an Electrical Circuit Almost Anywhere. What 3-D Printing Means To The Future Of Advertising. Around the dawn of the personal computer, advocates proclaimed that there would be one of these fancy boxes in every home. 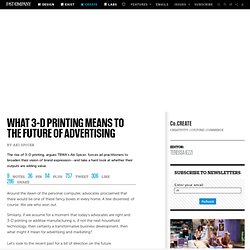 A few dissented, of course. We see who won out. Similarly, if we assume for a moment that today’s advocates are right and 3-D printing or additive manufacturing is, if not the next household technology, then certainly a transformative business development, then what might it mean for advertising and marketing? Let’s look to the recent past for a bit of direction on the future. Consider the dawn of television--the earliest ad executions were considered "experimental," as few staff were actually versed in the skills of motion filmmaking, editing, producing, location scouting. Has 3D printing in the home been over-hyped?

22 April 2013Last updated at 03:13 ET By Jane Wakefield Technology reporter Crayon Creatures turns children's drawings into solid objects I have a stripy animal on my mantelpiece which is a 3D printed model of a drawing that my seven-year-old daughter made for me. 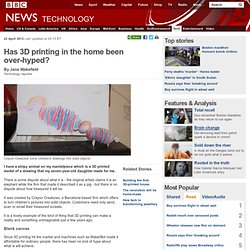 There is some dispute about what it is - the original artists claims it is an elephant while the firm that made it described it as a pig - but there is no dispute about how treasured it will be. It was created by Crayon Creatures, a Barcelona-based firm which offers to turn children's pictures into solid objects. Customers need only send, scan or email their treasured scrawls.

IBM Has 3D Printing on its Radar as a Transforming Technology. Is there anything 3-D printing can’t do? 3D printing pen that can draw real objects into existence raises over USD 2m on Kickstarter. Star Trek Trek Class Blog: Inventing The Replicator. Inventing the Replicatorby Professor Anthony Rotolo Star Trek’s replicator is an amazing technology concept that has fascinated us for decades. 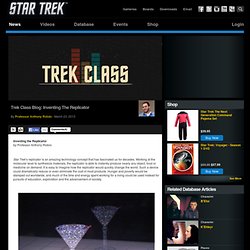 Working at the molecular level to synthesize materials, the replicator is able to instantly produce nearly any object, food or medicine on demand. It is easy to imagine how the replicator would quickly change the world. Such a device could dramatically reduce or even eliminate the cost of most products. Hunger and poverty would be stamped out worldwide, and much of the time and energy spent working for a living could be used instead for pursuits of education, exploration and the advancement of society. Star Trek envisions the future of humanity to be one of incredible achievements made possible by evolved philosophies as well as technologies. The shape of things to come: A consumer's guide to 3D printers. CES 2013 proved to be something of a coming out party for consumer-facing 3D printers. 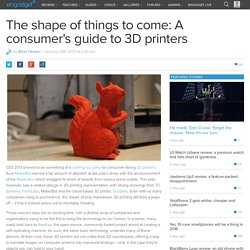 Sure MakerBot earned a fair amount of attention at last year's show with the announcement of the Replicator, which snagged its share of awards from various press outlets. This year, however, saw a relative deluge in 3D-printing representation, with strong showings from 3D Systems, FormLabs, MakerBot and the cloud-based 3D printer, Sculpteo. Even with so many companies rising to prominence, the dream of truly mainstream 3D printing still feels a ways off -- if that is indeed where we're inevitably heading.

These nascent days are an exciting time, with a diverse array of companies and organizations vying to be the first to bring the technology to our homes. In a sense, many roads lead back to RepRap, the open-source, community-fueled project aimed at creating a self-replicating machine. Experiments Find Strongest Shapes with 3D Printing. Physics lab uses 3D printing to test complex qualities of shapes made via computer Newswise — Prof. 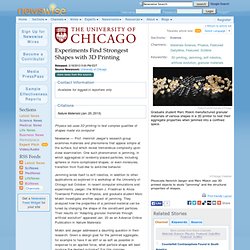 Heinrich Jaeger’s research group examines materials and phenomena that appear simple at the surface, but which reveal tremendous complexity upon close examination. One such phenomenon is jamming, in which aggregates of randomly placed particles, including spheres or more complicated shapes, or even molecules, transition from fluid-like to solid-like behavior. Jamming lends itself to soft robotics, in addition to other applications as explored in a workshop at the University of Chicago last October. 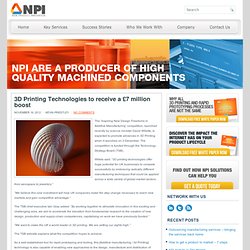 The competition is funded through the Technology Strategy Board (TSB). Willets said: “3D printing technologies offer huge potential for UK businesses to compete successfully by embracing radically different manufacturing techniques that could be applied across a wide variety of global market sectors, from aerospace to jewellery.” “We believe this new investment will help UK companies make the step change necessary to reach new markets and gain competitive advantage.” The TSB chief executive Iain Gray added: “By working together to stimulate innovation in this exciting and challenging area, we aim to accelerate the transition from fundamental research to the creation of new design, production and supply-chain competences, capitalising on work we have previously funded.” 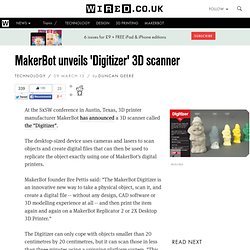 The desktop-sized device uses cameras and lasers to scan objects and create digital files that can then be used to replicate the object exactly using one of MakerBot's digital printers. MakerBot founder Bre Pettis said: "The MakerBot Digitizer is an innovative new way to take a physical object, scan it, and create a digital file -- without any design, CAD software or 3D modelling experience at all -- and then print the item again and again on a MakerBot Replicator 2 or 2X Desktop 3D Printer. " The Digitizer can only cope with objects smaller than 20 centimetres by 20 centimetres, but it can scan those in less than three minutes using a spinning platform system. "This is kind of like what happened when Flynn (in Tron) gets digitized into the game grid," Pettis said. The Digitizer will launch in Autumn 2013. 3D Printing Coming to Vending Machine Near You. If vending machines can dispense beer, pizza and movies, why not 3D-printed objects? 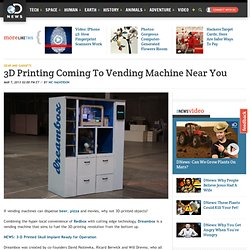 Combining the hyper-local convenience of Redbox with cutting edge technology, Dreambox is a vending machine that aims to fuel the 3D-printing revolution from the bottom up. NEWS: 3-D Printed Skull Implant Ready for Operation Dreambox was created by co-founders David Pastewka, Ricard Berwick and Will Drevno, who all met in a mobile application development class and competition at the University of California, Berkeley. The ‘Mo.Mo’: can 3D printing be sustainable?

The future of 3D printing is being hotly debated at the moment. 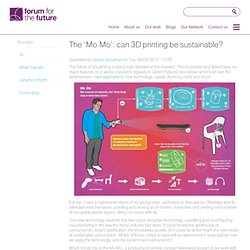 The Economist and Wired have run major features on it, we've covered it regularly in Green Futures (see below) and it's all over the twittersphere - new applications, new technology, rapidly declining costs and so on. For me, I have a nightmarish vision of my young sons, captivated as they are by CBeebies and its attendant merchandisers, pointing and clicking at on-screen characters and printing out hundreds of low-grade plastic figures, filling our house with tat.

This new technology could be the next major disruptive technology, unsettling and reconfiguring manufacturing in the way the music industry has been. It could herald the apotheosis of consumerism, instant gratification, the throwaway society. MIT's New Self-Assembly Lab Is Building A Paradigm Shift To 4-D Manufacturing. Sitting on a table in Skylar Tibbits’s lab, at MIT’s new Center for International Design, is a 200-gallon-fish tank--it's large enough to hold one of Damien Hirst’s pickled sharks. 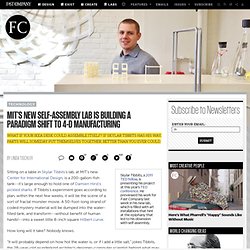 If Tibbits’s experiment goes according to plan, within the next few weeks, it will be the scene of a sort of fractal monster movie. A 50-foot-long strand of coded mystery material will be dumped into the water-filled tank, and transform--without benefit of human hands! --into a sweet little 8-inch square Hilbert curve. How long will it take? Nobody knows. Inhabitat. Radical Improvement like a 290 mpg car from 3D Printing Requires Radical Redesign. The Urbee 2 is a 3D printed car and it could revolutionize parts manufacturing while creating a cottage industry of small-batch automakers intent on challenging the status quo. Precise Control to Enable Lighter and Stronger Construction Making the car body via FDM [3D Printed ABS plastic via Fused Deposition Modeling (FDM)] affords precise control that would be impossible with sheet metal.

When he builds the aforementioned bumper, the printer can add thickness and rigidity to specific sections. When applied to the right spots, this makes for a fender that’s as resilient as the one on your Prius, but much lighter. That translates to less weight to push, and a lighter car means more miles per gallon. Radically fewer Parts for more Strength and Simplicity. MIT Unveils Plans For 4D Printing. 3D printing is poised to disrupt nearly every industry, with applications ranging from replicating organs to constructing houses. But now MIT is looking even further into the future by introducing the idea of 4D printing. MIT lecturer Skylar Tibbits, the founder of it’s new Self-Assembly Lab, unveiled the technology at the TED conference in Long Beach, California. 4D printing incorporates time as the fourth dimension, with 3D printed structures changing their form when activated.

You don’t have to be NASA to use 3D printing techniques. You don’t have to be NASA to use 3D printing techniques 3D Printing has become an important tool in many engineers’, product designers’ and entrepreneurs’ toolkits, offering the ability to shortcut traditional manufacturing processes where components are required to be replicated. Even NASA have recently embraced the technology, using a 3D printer to develop its Space Launch System (SLS), a heavy-duty launch vehicle scheduled to have its first test flight in 2017. “It’s the latest in direct metal 3D printing – we call it additive manufacturing now,” said Ken Cooper, leader of the Advanced Manufacturing Team at NASA’s Marshall Center. 3D printing, MakerBot, and the Hype Cycle. It’s being called the Industrial Revolution 2.0; “Manufacturing’s Big Bang.” Forget about “Made in China,” the future will be constructed in your living room — everything from cars, food, guns, drugs, even human organs.

3D printing and tissue engineering. Can 3D Printing Make Everything We Need? This article titled “Is 3D printing the key to Utopia?” Was written by John Naughton, for The Observer on Saturday 12th May 2012 23.05 UTC You know the problem: the dishwasher that has cleaned your dishes faithfully for 15 years suddenly stops working. You call out a repairman who identifies the problem: the filter unit has finally given up the ghost. “Ah,” you say, much relieved, “can you fit a new one?” At which point the chap shakes his head sorrowfully. This 3-D Printed Moon Base Might Be The Future Of Space Exploration. 3D printing: The printed world.