There’s a Plan to Bury Asia’s Carbon Emissions Under The Sea. Photographer: Kristian Helgesen/Bloomberg Australian and Japanese companies are studying plans to capture carbon dioxide from industrial emitters in Asia and store it under the ocean floor off the coast of Australia. 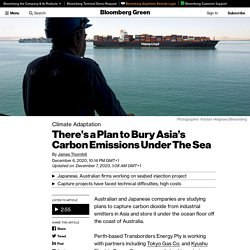 Perth-based Transborders Energy Pty is working with partners including Tokyo Gas Co. and Kyushu Electric Power Co. on proposals to ship emissions from heavy industry in Australia and potentially across the Asia-Pacific region, and use a floating hub -- technology currently deployed in the gas sector -- to inject the material under the seabed. Explore dynamic updates of the earth’s key data points Major energy producers have championed carbon capture and storage as a means to curb their emissions footprint, but the method has been slow to gain traction as key projects have been hit by technical issues and cost overruns. Carbon Capture and Storage. Start-ups test ideas to suck CO2 from atmosphere. It sounds at first like science fiction: giant machines that suck carbon dioxide directly out of the air to help alleviate climate change. 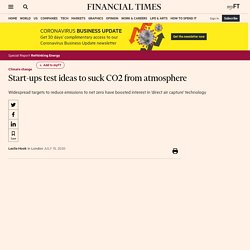 The concept, called “direct air capture”, may sound far-fetched, but dozens of these machines are already operating on several continents and more are on the way. A number of new projects and investments in the past six months have helped to bolster the nascent sector, which is comprised of a handful of small start-ups vying to perfect the technology. What a fascinating video on Climeworks from ⁦@lesliehook⁩, a carbon capture company in the Swiss Alps. A level geographers will love learning about how to turn CO2 into solid stone! Watch for free ⁦@ft4s⁩ #geographyathome. Start-ups test ideas to suck CO2 from atmosphere. Carbon capture and storage has stalled needlessly – three reasons why fears of CO₂ leakage are overblown.

The idea is simple: capture and concentrate CO₂ before it’s released to the air and store it deep underground where it can’t escape. 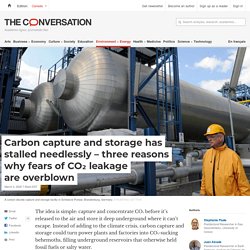 Instead of adding to the climate crisis, carbon capture and storage could turn power plants and factories into CO₂-sucking behemoths, filling underground reservoirs that otherwise held fossil fuels or salty water. The world’s first dedicated CCS project, Sleipner (in the Norwegian North Sea), started injecting CO₂ into underground reservoirs in 1996. Since then, it has successfully stored more than 20 million tonnes (Mt). That might sound impressive, but it’s nowhere near enough. The International Energy Agency recommends that 21,400 Mt of CO₂ should be captured and stored by 2030 to limit global warming to 2°C. 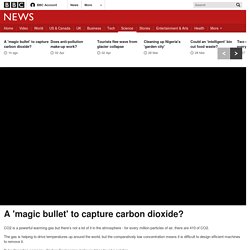 Is this technology the answer to our CO2 emissions problem? Scientists predict a gloomy future: one of misery, destruction and catastrophe. 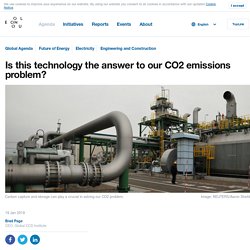 But the climate debate remains highly polarized. *****Biopolymers: The surprising way plastics could actually help fight climate change. What do your car, phone, soda bottle and shoes have in common? 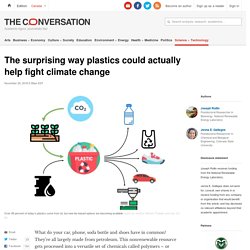 They’re all largely made from petroleum. This nonrenewable resource gets processed into a versatile set of chemicals called polymers – or more commonly, plastics. Over 5 billion gallons of oil each year are converted into plastics alone. Polymers are behind many important inventions of the past several decades, like 3D printing. Carbon capture and storage gets £20m 'sensible reboot' The UK wants to build its first project to capture and store carbon emissions from industry within the next decade, as part of a rebooted push by ministers to support the technology. 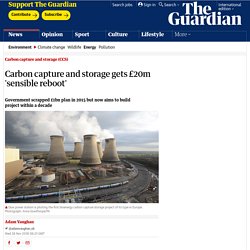 The government scrapped a £1bn carbon capture and storage (CCS) competition in 2015, with the then-chancellor George Osborne saying it was too costly. Earlier efforts had also collapsed. But on Wednesday the energy minister, Claire Perry, will signal the government’s renewed interest in the technology, including plans to repurpose fossil fuel infrastructure, such as reusing old gas pipelines to transport the carbon. Key 'step forward' in cutting cost of removing CO2 from air. Image copyright Carbon Engineering A Canadian company, backed by Bill Gates, says it has reached an important threshold in developing technology that can remove CO2 from the air. 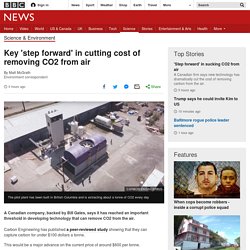 This would be a major advance on the current price of around $600 per tonne. Sucking carbon dioxide from the air always seemed too expensive - until now. @MattMcGrathBBC on a surprising development. BBC World Service sur Twitter : "“We’ve reached the tipping point for carbon dioxide levels in the atmosphere. If we don’t do something about it, expect extreme things to happen.” Can carbon capture really help to reverse global warming? More. Turning carbon dioxide into rock - forever.

Image copyright G Svanberg Nested in the snow-covered mountains of western Iceland, a maze of turbines and pipes belches thick billows of steam. 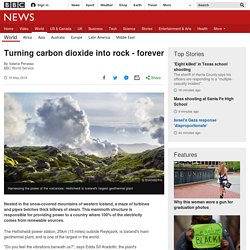 This mammoth structure is responsible for providing power to a country where 100% of the electricity comes from renewable sources. The Hellisheidi power station, 25km (15 miles) outside Reykjavik, is Iceland's main geothermal plant, and is one of the largest in the world. "Do you feel the vibrations beneath us? ", says Edda Sif Aradottir, the plant's manager, splashing snow as she stomps her boot on the ground.

Image copyright A Saeberg "This is a volcanic area. Hellisheidi is not just an accomplished provider of green energy. Thus keeping this greenhouse gas out of the atmosphere and putting a dent in global warming. We have already reached the tipping point for CO2 levels in the atmosphere and extreme events will happen if we don't act quickly and apply every solution available" ____________ Edda Sif Aradóttir, CarbFix Making soda.