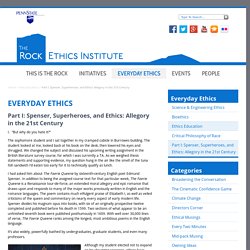 “But why do you hate it?” The sophomore student and I sat together in my cramped cubicle in Burrowes building. The student looked at me, looked back at his book on the desk, then lowered his eyes and shrugged. We changed the subject and discussed his upcoming writing assignment in the British literature survey course, for which I was currently a TA. As we weighed thesis statements and supporting evidence, my question hung in the air like the smell of the tuna fish sandwich I’d eaten too early for it to technically qualify as lunch. I had asked him about The Faerie Queene by sixteenth-century English poet Edmund Spenser. It’s also widely, powerfully loathed by undergraduates, graduate students, and even many professors. Although my student elected not to expand on his shrugging response, others have articulated many reasons for their disdain of Spenser’s poem, dating back almost to the time of its initial publication. Philosophy – Aeon Magazine. History of Science – Aeon Magazine.

An encyclopedia of philosophy articles written by professional philosophers. Ergo, an Open Access Journal of Philosophy. Hypatia: a journal of feminist philosophy. Philosophy association board reaches out to victims of sexual assault and harassment.

It’s hard these days to talk about women in philosophy without talking about sexual harassment and assault and sexism in general. 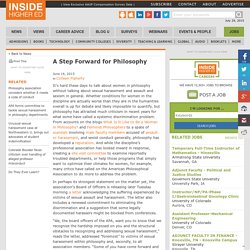 Whether conditions for women in the discipline are actually worse than they are in the humanities overall is up for debate and likely impossible to quantify, but philosophy has attracted much criticism in recent years for what some have called a systemic discrimination problem. From accounts on the blogs What Is It Like to Be a Woman in Philosophy? And Feminist Philosophers to a spate of scandals involving male faculty members accused of assault or harassment, and sexist conduct generally, philosophy has developed a reputation.

In perhaps its strongest statement on the matter yet, the association’s Board of Officers is releasing later Tuesday morning a letter acknowledging the suffering experienced by victims of sexual assault and harassment. The letter also potentially puts harassers on watch. Mixed Reaction So how can an association board serve members? Explaining Blame and Forgiveness (by Featured Philosopher Miranda Fricker) I am pleased to introduce the next PEA Soup Featured Philosopher, Miranda Fricker. 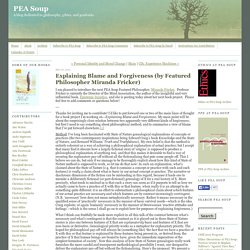 Profesor Fricker is currently the Director of the Mind Association, the author of the insightful and very influential book, Epistemic Injustice, and she is posting today about her next book project. Please feel free to add comments or questions below! Thanks for inviting me to contribute! I’d like to put forward one or two of the main lines of thought for a book project I’m working on—Explaining Blame and Forgiveness. 150 years ago, a world-famous philosopher called busyness the sign of an unhappy person — Quartz.

H&M probably talks about sustainability more than any other fast-fashion brand. 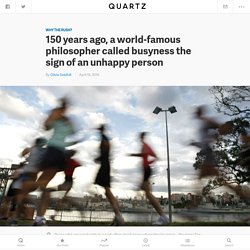 It produces a Conscious collection made using sustainable and recycled materials, creates glossy ad campaigns to encourage garment recycling, and has a voucher program offering discounts to those who donate their old clothes at its stores. On April 18, it kicks off a major project intended to collect 1,000 tons of used clothes, called World Recycle Week, that it’s promoting heavily, even making a music video in collaboration with rapper M.I.A. These efforts sound great, but critics—myself included—have questioned how much they actually mitigate the massive and growing company’s environmental impact.

Some suggest these displays of devotion to the notion of sustainability are “greenwashing,” distracting from the extent of the harm the company does, and even boosting sales. To start with, the biggest strike against H&M is the giant pile of clothing it produces every day. Morality is a muscle. Get to the gym. Sign Up for Our free email newsletters Every once in a while, I read the news and I think "Damn. 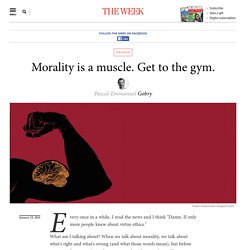 If only more people knew about virtue ethics. " What am I talking about? When we talk about morality, we talk about what's right and what's wrong (and what those words mean), but before we get to those questions, there are even broader questions of how we think about morality and how we should approach it. There's deontological ethics, or the idea that the way we should form moral judgments is according to rules, which say which things are right and which things are wrong.

Then there's consequentialist ethics, which says that we should form moral judgments on the basis of the consequences of an action. Then there's something called virtue ethics, which is the third and most interesting school. More Perspectives Michael Brendan Dougherty How the Republican Party blew its best shot at defeating Hillary Clinton Shikha Dalmia Aristotle believed that morality was essentially like a craft.