Civilizations Calculator. This calculator determines the numbers of suitable stars, planets, life-bearing planets, and civilizations which might arise in a galaxy. 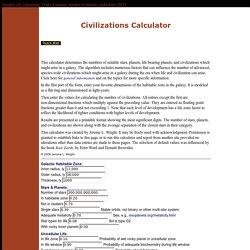 The algorithm includes numerous factors that can influence the number of advanced, species-wide civilizations which might arise in a galaxy during the era when life and civilization can arise. Click here for general information and on the topics for more specific information. In the first part of the form, enter your favorite dimensions of the habitable zone in the galaxy.

Fantasy World Building: Star systems and other external influences. The Sun's Influence on your Fictional World A solar system is a system with one or more stars. 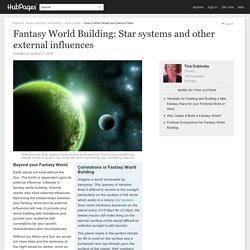 Your fantasy world can exist inside a system with multiple stars with varying ages and sizes. When a star explodes or implodes it will have a large impact on the rest of your system but until then, your fantasy world might enjoy a relatively disaster free period in which your fantasy world could support living creatures with developed cultures . A sun can be born out of the "dust and debris left behind by novae and supernovae eventually blend with the surrounding interstellar gas and dust, enriching it with the heavy elements and chemical compounds produced during stellar death.

Eventually, those materials are recycled, providing the building blocks for a new generation of stars and accompanying planetary systems. Fictional Ecosystems for Fantasy World Building. Once you have recognized and listed the major Ecosystems of your fictional world, you may want to explore them further. 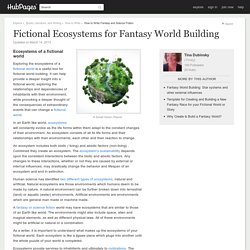 This useful template can be used for exploring Ecosystems in a geofiction or for background research fictional book, here is a useful template to help you get started: Service:What service or services does the ecosystem provide? Does the ecosystem interact with any other ecosystems? Type: What type of Ecosystem is it? Is it artificial, real, or a combination of the two? Location:Whereabouts is the ecosystem located? Why Create & Build a Fantasy World? World Building Worksheets. ProFantasy Soft - Map Creator. How to Make a Fantasy World Map. Any good fantasy world deserves a map, but how does a world map go from your notebook to an espansive illustration that provides depth and information? 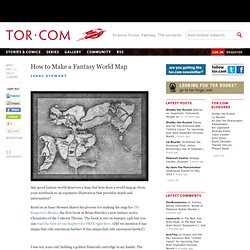 Read on as Isaac Stewart shares his process for making the map for The Emperor’s Blades, the first book in Brian Staveley’s new fantasy series Chronicles of the Unhewn Throne. The book is out on January 14th but you can read the first seven chapters for FREE right here. (Did we mention it has ninjas that ride enormous hawks? It has ninjas that ride enormous hawks!) I was ten years old, holding a golden Nintendo cartridge in my hands. I didn’t play The Legend of Zelda to win. Oh boy, I had no idea where that little folded up map would lead me. Exploration For Brian Staveley’s excellent fantasy debut, The Emperor’s Blades, Heather Saunders at Tor wanted a two-page map that would match the feel of the book. Brian’s attention to detail was amazing! Before I jumped in headfirst, I needed to make sure of my destination.

Borders. Maps Workshop — Developing the Fictional World through Mapping. Most of the books I’ve written have started with a map. 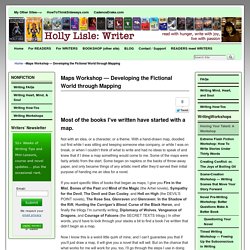 Not with an idea, or a character, or a theme. With a hand-drawn map, doodled out first while I was sitting and keeping someone else company, or while I was on break, or when I couldn’t think of what to write and had no ideas to speak of and knew that if I drew a map something would come to me. Some of the maps were fairly artistic from the start. How To Draw Fantasy Landscapes And Worlds. Drawing Fantasy Worlds: Classic Castle Old World Scene When it comes to drawing the worlds that your fantasy characters will inhabit it becomes an easier solution to reference life scenes by taking photos and pictures of great landscape scenes on your travels or thumb through a book showing scenes from all around the world. 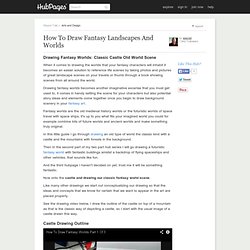 Drawing fantasy worlds becomes another imaginative excerise that you must get used to, it comes in handy setting the scene for your characters but also potential story ideas and elements come together once you begin to draw background scenery in your fantasy art. Creating Fantasy Nations (World Building II) By this point you've got your map and the basics for one of your ideas. 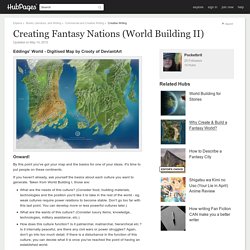 It's time to put people on these continents. If you haven't already, ask yourself the basics about each culture you want to generate. Religion in fantasy novels. Since no one burned my house down after the Tolkien post, I’m going out on a limb here and talk to you about using religion in your fantasy novels. 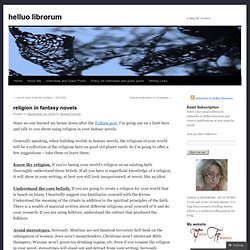 Generally speaking, when building worlds in fantasy novels, the religions of your world will be a reflection of the religions here on good old planet earth. So I’m going to offer a few suggestions – take them or leave them: Know thy religion. If you’re basing your world’s religion on an existing faith thoroughly understand those beliefs. If all you have is superficial knowledge of a religion, it will show in your writing; at best you will look inexperienced, at worst, like an idiot. Understand the core beliefs. Avoid stereotypes. Religions don’t kill. Treat all religions with respect. Template for Creating and Building a New Fantasy Race for your Fictional World. Creating New Races In Fantasy Fiction. Let's Create a Fantasy Race An example of a created fantasy race can give a better idea about what each needs to be represented successfully in a novel or short story. 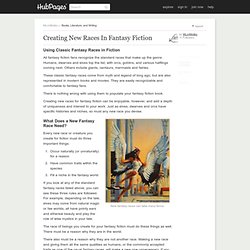 Let's call our fantasy race the Blorgans. The first step in creating a fully-fleshed-out race, is to decide what you need them for and their general traits. In most cases, form follows function. If you want a Blorgan warrior to accompany your hero on his quest, Blorgans must be able to travel, communicate and assist the hero in some way. So, Blorgans are vaguely humanoid. Their form follows their function in the story. Making the Blorgans 3 Dimensional If we leave the blorgan as just some short guy with wings, his character could be turned into a human, elf or dwarf easily with not much editing. 7 Deadly Sins of Worldbuilding. World Builder Projects. 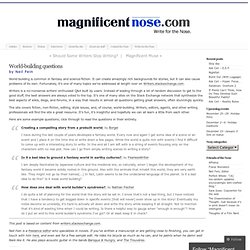 It can create amazingly rich backgrounds for stories, but it can also cause problems of its own. Fortunately, it’s one of many topics we’ve addressed at length over on Writers.stackexchange.com. Writers is a no-nonsense writers’ enthusiast Q&A built by users. Instead of wading through a lot of random discussion to get to the good stuff, the best answers are always voted to the top. It’s one of many sites on the Stack Exchange network that synthesize the best aspects of wikis, blogs, and forums, in a way that results in almost all questions getting great answers, often stunningly quickly. The site covers fiction, non-fiction, editing, style issues, and, of course, world-building. Here are some example questions; click through to read the questions in their entirety. 30 Days of WorldBuilding. By popular demand, you can now download the Magical WorldBuilder Guide in three easy-to-carry (non-DRM) formats: PDF for printing out at home or reading on a computerePub for use with many fine ereader devicesMOBI for use with Kindles and MobiPocket software.As of 2007, The world-builder exercises are licensed under a Creative Commons license to help you in deciding whether you can translate (yes, with credit back), distribute to your writing group (yes, with credit), sell (not without permission), reprint (yes, for non-commercial purposes), or mirror (yes, with credit back) this useful guide!

In October, 2004, I posted 30 days of world-building exercises to the NaNoWriMo discussion forums. These are short, 15-minute exercises that can help you make crucial decisions about your world, and what you want your story to say about it. These exercises have been edited for general use and re-posted here. Questions to guide you in worldbuilding for fantasy or science-fiction — Veronica Sicoe. I’ve been busy worldbuilding this week. It’s one of my favorite things to do in the process of writing sci-fi, and it makes me all giddy and drooly like a kid that’s been dropped into a toybox. Since I revisited my collected materials for the worlds I’m writing in, and have overhauled one of these entirely, I grabbed the opportunity to put together a list of important worldbuilding questions to share with you.

Not every author goes about worldbuilding the same way — and that’s perfectly fine, since not every genre needs it, and not every story is focused primarily on the setting. Also, not all aspects of a world or society are equally relevant to that particular plot. But even if you’re only using the setting as a wallpaper, you still need to understand how it works and why, so that you don’t accidentally slip and kill the reader’s suspension of disbelief. So buckle up, and let’s go. Geography 1. Fantasy Worldbuilding Questions.