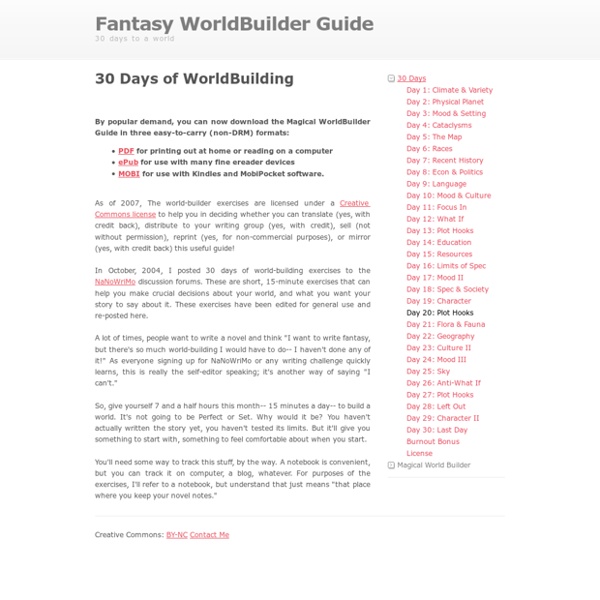 By popular demand, you can now download the Magical WorldBuilder Guide in three easy-to-carry (non-DRM) formats: PDF for printing out at home or reading on a computerePub for use with many fine ereader devicesMOBI for use with Kindles and MobiPocket software.As of 2007, The world-builder exercises are licensed under a Creative Commons license to help you in deciding whether you can translate (yes, with credit back), distribute to your writing group (yes, with credit), sell (not without permission), reprint (yes, for non-commercial purposes), or mirror (yes, with credit back) this useful guide! In October, 2004, I posted 30 days of world-building exercises to the NaNoWriMo discussion forums. These are short, 15-minute exercises that can help you make crucial decisions about your world, and what you want your story to say about it. These exercises have been edited for general use and re-posted here. So, give yourself 7 and a half hours this month-- 15 minutes a day-- to build a world.

World-building questions World-building is common in fantasy and science-fiction. It can create amazingly rich backgrounds for stories, but it can also cause problems of its own. Fortunately, it’s one of many topics we’ve addressed at length over on Writers.stackexchange.com. Writers is a no-nonsense writers’ enthusiast Q&A built by users. Instead of wading through a lot of random discussion to get to the good stuff, the best answers are always voted to the top. It’s one of many sites on the Stack Exchange network that synthesize the best aspects of wikis, blogs, and forums, in a way that results in almost all questions getting great answers, often stunningly quickly. Making Histories One way to coax the reader into accepting the setting of your story as genuine is to build your world on a convincing history. In SF, this generally takes the form of a future history--of Earth, other planets, or both. The General Character of History

7 Unnecessary Science Fiction Worldbuilding Details - THE GALAXY EXPRESS I’m a subscriber to the idea of “just enough” worldbuilding, especially when reading a cross genre novel like science fiction romance. I don’t require pages of explanation about certain details or in some cases even a sentence. Mainly this is because of my awareness of practical factors, such as word count limits. Additionally, like many readers I bring a certain level of knowledge of genre tropes to fill in gaps or I’ll extrapolate from what’s being described on the page. Creative Uses of Magic in Your Fantasy Story by Philip Martin How can you create an interesting form of magic for your fantasy story? Will magic, in your fiction, be like a tool? A technique?

Questions to guide you in worldbuilding for fantasy or science-fiction — Veronica Sicoe I’ve been busy worldbuilding this week. It’s one of my favorite things to do in the process of writing sci-fi, and it makes me all giddy and drooly like a kid that’s been dropped into a toybox. Since I revisited my collected materials for the worlds I’m writing in, and have overhauled one of these entirely, I grabbed the opportunity to put together a list of important worldbuilding questions to share with you.

Template for Creating and Building a New Fantasy Race for your Fictional World In fantasy world building and writing, the term "race" is loosely used to describe a sentient or sapient life form with a similar degree of intelligence and awareness as that of a human. Generally a new race will have shared traits and will be aware of its self and its environment. The way your race interacts with its environment will influence the local ecosystems and they will use the world's resources to better their standard of living and interact together in a social capacity.

Matching Your Money to Your World There has been discussion in many places concerning money in speculative fiction. Many people adhere to the common currencies of gold, silver, and bronze. Others, especially science fiction writers, will use the ubiquitous ‘credit’ system. Each of these has its place, but any system must be matched to the appropriate world atmosphere. If your world is very young, doesn’t have established governments, and survives on individual farming and small towns, you will likely want to rely on a barter system. It is not an easy system to deal with from a writing standpoint because you will need to make the trading difficult in order to capture the flavor of that system.

Creating Fantasy and Science Fiction Worlds - Intro By Michael James Liljenberg. Introduction Everybody says, "My topic is the most important thing you can learn in order to write science fiction and fantasy," when they write a tutorial for FARP. But I'm actually not exaggerating. Victorian Era Names, A Writer's Guide circa 1840's-1890's Being a compilation drawn from old census and vital statistic records. A large part of creating a good set of characters in fiction writing is giving your imaginary populace good names. The right name resonates on the tongue and lingers in the mind, as just the right "fit" for who that heroic - or despicable - person was. Who can forget "Captain Ahab" and his manic pursuit of the Great White Whale, or the plain-spoken, earthy spirit of "Tom Sawyer," or the stern lyricism of "Sherlock Holmes?" The same holds true for writing stories set in the 1800's.

List of forms of government Government of any kind currently affects every human activity in many important ways. For this reason, political scientists generally argue that government should not be studied by itself; but should be studied along with anthropology, economics, history, philosophy, science, and sociology. Political science Maps Workshop — Developing the Fictional World through Mapping Most of the books I’ve written have started with a map. Not with an idea, or a character, or a theme. With a hand-drawn map, doodled out first while I was sitting and keeping someone else company, or while I was on break, or when I couldn’t think of what to write and had no ideas to speak of and knew that if I drew a map something would come to me. Some of the maps were fairly artistic from the start. Some began on napkins or the backs of throw-away paper, and only became things of any artistic merit after they’d served their initial purpose of handing me an idea for a novel. Now I know this is a weird little quirk of mine, and I can’t guarantee you that if you’ll just draw a map, it will give you a novel that will sell.

Building the Perfect Beast Sarah Jane Elliott ©2001, Sarah Jane Elliott There are 1.5 million identified species on this great and wonderful planet of ours, representing only a fraction of the species actually out there. Current evidence shows that the total number may be anywhere from ten to thirty million. In other words, there are a lot of critters out there. World Building 101 World Building 101 by Lee Masterson You are the ultimate creator of your fictional world. No matter where or when your story is set, regardless of what events unfold, and despite the characters you introduce to your readers, they are all products of your unique imagination. "But I write romance set in the present time," I hear you cry. It doesn't matter whether your story is set in 16th century Middle Europe, or the 28th century Altarian star-system, your story still belongs in a world created entirely by you. So, even though it can be great fun to invent strange sounding planets in distant galaxies, complete with lethal atmospheres and budding alien life-forms, there are still writers out there who would much prefer to deal with Earth as we already know it.