Mercosur - Trade. Countries and regions Mercosur The EU has concluded a trade agreement with the four founding members of Mercosur (Argentina, Brazil, Paraguay, and Uruguay) as part of a bi-regional Association Agreement. 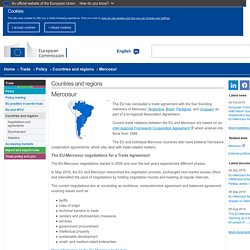 Current trade relations between the EU and Mercosur are based on an inter-regional Framework Cooperation Agreement which entered into force from 1999. The EU and individual Mercosur countries also have bilateral framework cooperation agreements, which also deal with trade-related matters. Austria blocks EU-Mercosur trade deal with South America. Image copyright Getty Images MPs in Austria have dealt a blow to the EU's landmark trade deal with South America's economic bloc, by demanding a government veto on the deal. 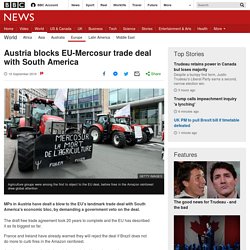 The draft free trade agreement took 20 years to complete and the EU has described it as its biggest so far. ¿What is the Pacific Alliance? – Alianza del Pacífico. Ecuador to join market-friendly Pacific Alliance under Moreno. Sistema de la Integración Centroamericana (SICA) SICA in Brief The Central American Integration System (SICA) is the institutional framework of Regional Integration in Central America, created by the States of Costa Rica, El Salvador, Guatemala, Honduras, Nicaragua and Panama. 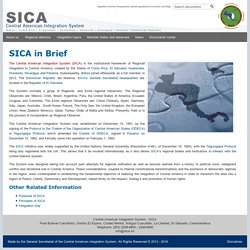 Subsequently, Belize joined afterwards as a full member; in 2013, The Dominican Republic did likewise. Monroe Doctrine, 1823 - 1801–1829. What’s Driving The Digital Banking Boom In Latin America – Crunchbase News. Diego Caicedo is the Co-Founder and CEO of OmniBnk, a neobank that provides financial services to SMEs in Latin America. 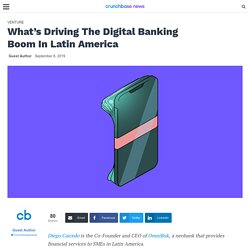 The availability of financial services is improving rapidly in emerging markets around the world. Driving this change is the widespread usage of mobile devices. Among the 1.7 billion unbanked adults worldwide, it’s estimated that over one billion now have access to a mobile device. Population of South America (2019) - Worldometers. Countries in South America The current population of South America is 428,297,127 as of Tuesday, October 22, 2019, based on the latest United Nations estimates. 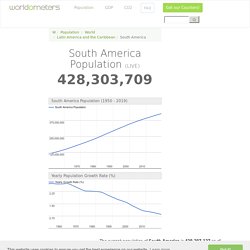 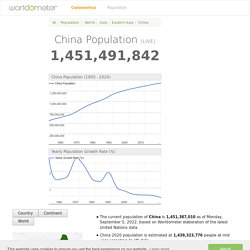 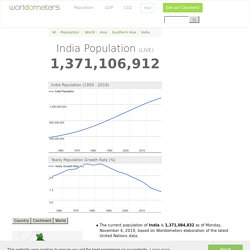 The Population of India (1950 - 2019) chart plots the total population count as of July 1 of each year, from 1950 to 2019. The Yearly Population Growth Rate chart plots the annual percentage changes in population registered on July 1 of each year, from 1951 to 2019. This value can differ from the Yearly % Change shown in the historical table, which shows the last year equivalent percentage change assuming homogeneous change in the preceding five year period. Joint Statement from President Donald J. Trump and President Jair Bolsonaro. Office of the Press Secretary Today, President Donald J. 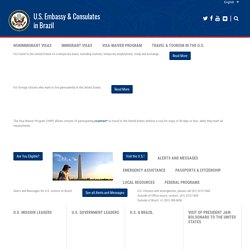 Trump and President Jair Messias Bolsonaro of Brazil committed to building a new partnership between their two countries focused on increasing prosperity, enhancing security, and promoting democracy, freedom, and national sovereignty. President Trump and President Bolsonaro reiterated that the United States and Brazil stand with the Interim President of Venezuela Juan Guaido, along with the democratically elected National Assembly, and the Venezuelan people, as they work to peacefully restore constitutional order to Venezuela. The two Presidents agreed to deepen their partnership through the United States-Brazil Security Forum to combat terrorism, narcotics and arms trafficking, cybercrimes, and money laundering, and they welcomed two new arrangements to enhance border security.

President Trump announced the United States’ intent to designate Brazil as a Major Non-NATO Ally. By U.S. Amid Political Change in Latin America, Investor Sentiment Has Adjusted in a Curious Way. An aerial view of the construction of Mexico City's new airport. 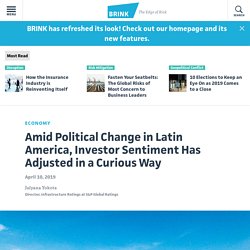 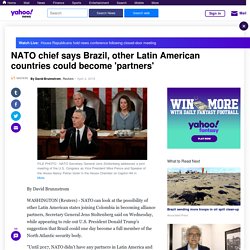 President Donald Trump's suggestion that Brazil could one day become a full member of the North Atlantic security body. "Until 2017, NATO didn’t have any partners in Latin America and then in 2017 we got our first partner, which was Colombia, and to be a close partner of NATO is something that is good for NATO and the partner country," the NATO leader told Reuters in an interview ahead of a NATO ministerial meeting in Washington.

"So of course, it is a possibility to look into the possibility of having also other countries in Latin America become partners which then provides a platform, a framework for close political and practical cooperation," he said. Ask if a country such as Brazil could become a member, Stoltenberg said: "No. Argentina election: Centre-left Alberto Fernández wins presidency. Media playback is unsupported on your device Centre-left opposition candidate Alberto Fernández has been elected president of Argentina in a vote dominated by economic concerns. Mr Fernández, 60, got more than the 45% of the vote needed to win, beating conservative incumbent Mauricio Macri. Raucous crowds gathered at Mr Fernández's election headquarters to celebrate the result of Sunday's poll.

A large crowd of supporters burst into a roar outside the Frente de Todos (Everybody’s Front) party bunker in the Chacarita neighbourhood of the capital Buenos Aires on Sunday night, when preliminary official results gave the victory to the centre-left presidential candidate Alberto Fernández and his running mate Fernández de Kirchner. President-elect Fernández, who assumes office on 10 December, arrived at the presidential palace on Monday for a meeting with outgoing incumbent Mauricio Macri to discuss the potentially tricky transition of power. Conceding defeat on Sunday, Macri told his supporters: “We need an orderly transition that will bring tranquility to all Argentinians, because the most important thing is the wellbeing of all Argentinians.”

Argentina Economy, Politics and GDP Growth Summary - The Economist Intelligence Unit. Chile GDP per capita. Chile protests: President to sack entire cabinet after more than one million people take to streets. Chile's president Sebastian Pinera has asked all his cabinet members to resign and promised reforms as he attempts to restore control after a wave of mass protests. The conservative leader has struggled to manage widespread unrest that has gripped his country this week amid anger over inequality.

At least 20 people have been killed since rioting broke out in response to a four per cent cent rise in subway fares earlier this month. Chile in state of emergency as protests rage. Despite travel warnings Colombia's tourism numbers at record levels. Economy of Colombia. Colombia is Latin America's fourth largest economy measured by gross domestic product.[17] Petroleum is Colombia's main export, making over 45% of Colombia's exports. Manufacturing makes up nearly 12% of Colombia's exports, and grows at a rate of over 10% a year.

How to Keep the Colombian Peace Deal Alive. Russian army helping Venezuela amid US 'threats': Moscow's ambassador. China’s PLA Troops in Venezuela Is Game Changer. The reported arrival of Chinese military personnel in Venezuela last weekend is undoubtedly a major event in world politics. Unlike Russia, which has a history of force projection abroad, this is an extremely rare Chinese move. Although vital Chinese interests are at stake in the war against terrorist groups in Afghanistan and Syria, China refrained from publicising any such deployment. Costa Rica Economic Snapshot. Costa Rica medical device industry on the rise - Med-Tech Innovation.