Hart Crane. Hart Crane is considered a pivotal even prophetic figure in American literature; he is often cast as a Romantic in the decades of high Modernism. 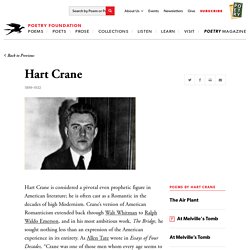 Crane’s version of American Romanticism extended back through Walt Whitman to Ralph Waldo Emerson, and in his most ambitious work, The Bridge, he sought nothing less than an expression of the American experience in its entirety. As Allen Tate wrote in Essays of Four Decades, “Crane was one of those men whom every age seems to select as the spokesman of its spiritual life; they give the age away.” He was born in Garrettsville, Ohio, in 1899 to upper middle-class parents, with whom he had a fraught relationship.

He was raised in part by his grandmother in Cleveland. His grandmother’s library was extensive, featuring editions of complete works by poets such as Victorian Robert Browning and Americans Ralph Waldo Emerson and Walt Whitman, both of whom became major influences in Crane’s poetry. Once revived, Crane traveled back to New York City. Definition, Facts, & Significance. Napoleonic Code, French Code Napoléon, French civil code enacted on March 21, 1804, and still extant, with revisions. 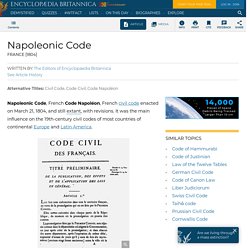 It was the main influence on the 19th-century civil codes of most countries of continental Europe and Latin America. Read More on This Topic civil law: The historical rise of civil law …to be known as the Napoleonic Code. Forces behind codification. The History of Cable Cars and Electric Streetcars. San Franciscan Andrew Smith Hallidie patented the first cable car on January 17, 1861, sparing many horses the excruciating work of moving people up the city's steep roadways. 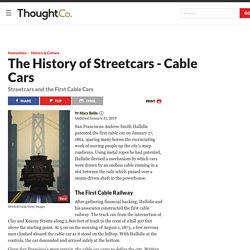 Using metal ropes he had patented, Hallidie devised a mechanism by which cars were drawn by an endless cable running in a slot between the rails which passed over a steam-driven shaft in the powerhouse. The First Cable Railway After gathering financial backing, Hallidie and his associates constructed the first cable railway. The New Orleans Streetcar Protests of 1867 : We're History. When did America desegregate public transportation? 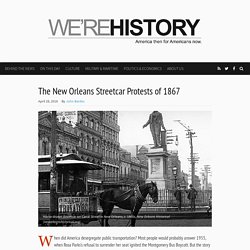 Most people would probably answer 1955, when Rosa Parks’s refusal to surrender her seat ignited the Montgomery Bus Boycott. But the story begins at least 88 years before that, when William Nichols calmly took a seat aboard a whites-only streetcar in New Orleans, Louisiana, and refused to move. The date was April 28, 1867, two years after the end of the Civil War.

Nichols was one of the thousands of African American women and men throughout New Orleans and the nation to declare a nonviolent war on streetcar segregation that year. Using tools familiar to later generations of civil rights activists—marches, boycotts, sit-ins, and rallies—these former slaves and freeborn people of color not only established many of the South’s first racially integrated public institutions, but they also helped expand the civil rights of all Americans. One of these activists was William Nichols. History of Bowling in the US. The history of bowling in the United States reaches back to European expansion in to North America. 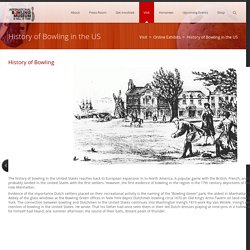 A popular game with the British, French, and Dutch variations of bowling probably landed in the United States with the first settlers. However, the first evidence of bowling in the region is the 17th century depictions of Dutchmen bowling in what is now Manhattan. Evidence of the importance Dutch settlers placed on their recreational activity is the naming of the “Bowling Green” park, the oldest in Manhattan. This illustration by E A Abbey of the glass windows at the Bowling Green offices in New York depict Dutchmen bowling circa 1670 on Old King’s Arms Tavern on land now 2nd and Broadway in New York. The connection between bowling and Dutchmen in the United States continues into Washington Irving’s 1819 work Rip Van Winkle. 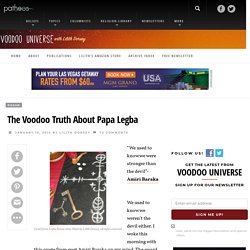 I woke this morning with this quote from poet Amiri Baraka on my mind. The award winning poet, playwright, and visionary passed over into the realm of the ancestors Thursday January 9th. I remember seeing him (as much as a 4 year old can remember anything) at an interactive play he staged about the Underground Railroad. He was controversial and sometimes confrontational like Voodoo’s gatekeeper Papa Legba. The portrayal of Papa Legba in this week’s episode of American Horror Story: Coven left a bad taste in a lot of people’s mouths, or should I say, up their noses. History Of New Orleans Voodoo. History of Voodoo in New Orleans Synonymous with New Orleans, voodoo first came to Louisiana with enslaved West Africans, who merged their religious rituals and practices with those of the local Catholic population. 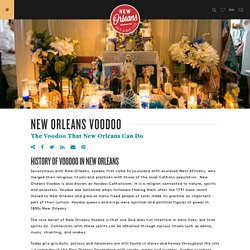 New Orleans Voodoo is also known as Voodoo-Catholicism. It is a religion connected to nature, spirits and ancestors. Voodoo was bolstered when followers fleeing Haiti after the 1791 slave revolt moved to New Orleans and grew as many freed people of color made its practice an important part of their culture. New Orleans Voodoo. NEW ORLEANS VOODOO CROSSROADS A BRIEF HISTORY OF VOODOO The practice of Voodoo is probably as old as the African continent itself. 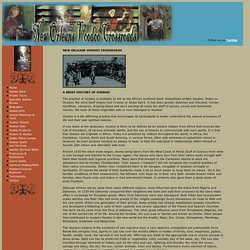 Sometimes written Voudou, Vodou or Voudun, the word itself means God Creator or Great Spirit. It has been greatly distorted and misused; human sacrifices, vampires, dripping blood and devil worship all make the stuff of spooky novels and Hollywood movies. Yet none of these originated with or ever belonged to Voodoo! Voodoo is a life affirming practice that encourages its participants to better understand the natural processes of life and their own spiritual natures.