Millions at risk from default webcam passwords. Remember all those webcams that got infected by the Mirai IoT botnet two years ago? 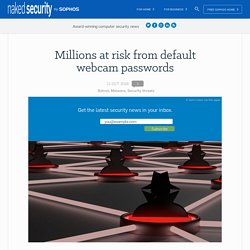 Well, Hangzhou Xiongmai Technology Co. ,Ltd (Xiongmai) – the Chinese manufacturer that made many of them – is back with another vulnerability that puts millions of devices across the world at risk yet again. Xiongmai eventually fixed the vulnerability in its products that enabled the Mirai authors to compromise an unknown number of devices and bring the internet to a standstill. That doesn’t mean that the company’s products are watertight, though. The new vulnerability creates the opportunity for new attackers to make yet another large and powerful IoT botnet. The vulnerability lies in a feature called XMEye P2P Cloud, which is enabled on all Xiongmai devices by default. Using a variety of apps, users log into their devices via Xiongmai’s cloud infrastructure. First, Xiongmai uses a unique ID for each device which is based on its MAC address, which is in a standard, non-random format.

Are you infected? CCTV cameras and captured images – DataRainbow. The omni-presence of CCTV cameras. 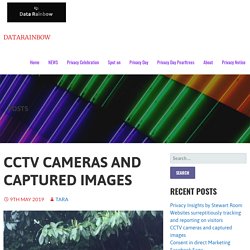 A subject I have been writing about for many years, including here and here. Two new guidances, one by the Irish Data Protection commissionner and one by the UK ICO. I know, big Brother is taking over our streets and buildings. This omniveillance has severe chilling effects on our Fundamental Rights of freedom and human dignity. What private CCTV camera surveillance can cause ? Record any movement. CCTV Cameras are watching us. Are we secure. Update 22/01/2011 ‘Britain’s ‘creeping’ spy cameras’Update 20/01/2011: UK Is CCTV creeping too far? 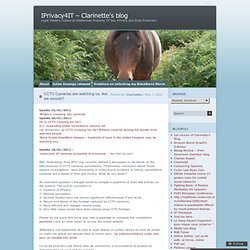 D.C. expanding public surveillance camera net Via @hiiamfoz: Is CCTV creeping too far? Britains could be among the worlds most watched people. ‘Nova Scotia shoplifters beware – hundreds of eyes in the United Kingdom may be watching you.’ Update 18/01/2011 : ‘Unsecured IP cameras accessible to everyone‘ – You feel secure? Marc Rotenberg, from EPIC.org, recently started a discussion on Facebook on the effectiveness of CCTV cameras surveillance. An important question I thought worth to compile a pearltree of links and articles on the subject. 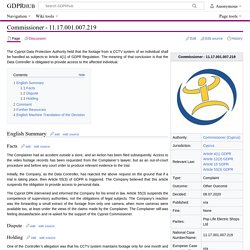 The meaning of that conclusion is that the Data Controller is obligated to provide access to the affected individual. English Summary[edit | edit source] Facts[edit | edit source] The Complainer had an accident outside a store, and an Action has been filed subsequently. Access to the video footage records has been requested from the Complainer’s lawyer, but as an out-of-court procedure and before any court order to produce relevant evidence to the trial. Initially, the Company, as the Data Controller, has rejected the above request on the ground that if a trial is taking place, then Article 55(3) of GDPR is triggered. 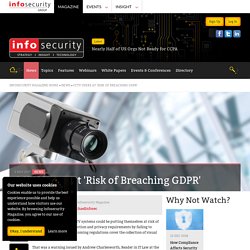 That was a warning issued by Andrew Charlesworth, Reader in IT Law at the University of Bristol, in white paper Watching the Watchers. Charlesworth highlighted the fact that because there has been little regulation governing CCTV systems (until now) there is a danger that users will fall short in their obligations to ensure safe usage under GDPR, which comes into force in just six months. What’s more, a lack of any compulsory CCTV registration process makes it difficult to gauge how many systems are actually being used in the UK, although research from Cloudview suggest the figure sits around 8.2 million cameras – all of those will need to comply with the GDPR come May 2018. La reconnaissance faciale testée dès janvier 2019 à l'entrée d'un lycée de Nice.