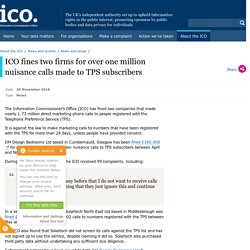 It is against the law to make marketing calls to numbers that have been registered with the TPS for more than 28 days, unless people have provided consent. DM Design Bedrooms Ltd based in Cumbernauld, Glasgow has been fined £160,000 for making more than 1.6 million nuisance calls to TPS subscribers between April and November 2017. During that period, the TPS and the ICO received 99 complaints, including: “Having told this company before that I do not want to receive calls from them, it is concerning that they just ignore this and continue to harass people.”

In a separate ICO investigation, Solartech North East Ltd based in Middlesbrough was fined £90,000 for making 74,902 calls to numbers registered with the TPS between May and June 2017. Andy Curry, ICO Group Enforcement Manager, said: DM Design Bedrooms Ltd. Stockport firms fined for nuisance calls and spam texts. The Information Commissioner’s Office (ICO) has fined two firms in Stockport for disrupting the public with nuisance marketing. 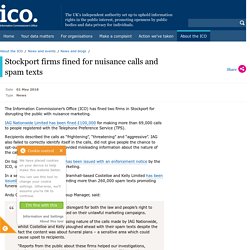 IAG Nationwide Limited has been fined £100,000 for making more than 69,000 calls to people registered with the Telephone Preference Service (TPS). Recipients described the calls as “frightening”, “threatening” and “aggressive”. IAG also failed to correctly identify itself in the calls, did not give people the chance to opt-out of receiving them and provided misleading information about the nature of the call. On top of the fine, the company has been issued with an enforcement notice by the ICO, ordering it to stop illegal marketing. In a separate ICO investigation, Bramhall-based Costelloe and Kelly Limited has been issued with a £19,000 fine for sending more than 260,000 spam texts promoting funeral plans. Andy Curry, ICO Enforcement Group Manager, said: Nuisance calls and messages. We have placed cookies on your device to help make this website better. 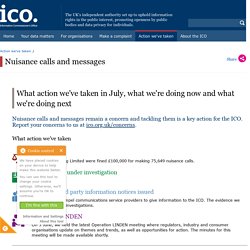 You can use this tool to change your cookie settings. Otherwise, we’ll assume you’re OK to continue. Some of the cookies we use are essential for the site to work. We also use some non-essential cookies to collect information for making reports and to help us improve the site. The cookies collect information in an anonymous form. To control third party cookies, you can also adjust your browser settings. £300k ICO fine fuels new call to bring directors to book - DecisionMarketing. The Information Commissioner’s Office is continuing its fight to get the Government to reintroduce measures which would make directors of rogue telemarketing firms personally liable for fines after slapping yet another business with a £300,000 penalty for unlawful marketing. 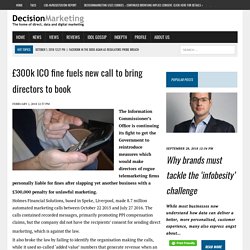 Holmes Financial Solutions, based in Speke, Liverpool, made 8.7 million automated marketing calls between October 22 2015 and July 27 2016. The calls contained recorded messages, primarily promoting PPI compensation claims, but the company did not have the recipients’ consent for sending direct marketing, which is against the law. It also broke the law by failing to identify the organisation making the calls, while it used so-called ‘added value’ numbers that generate revenue when an individual calls the number, which is then apportioned and passed to associated companies and the network carrier.

To leave a comment please register – it takes less than a minute and is free of charge. ICO Issues £100,000 Fine for Nuisance Calls. ICO hands out £600,000 worth of fines in nuisance marketing crackdown. The Information Commissioner’s Office (ICO) has fined four companies a combined total of £600,000 for harassing citizens with their marketing. 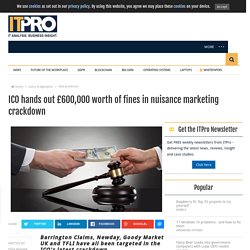 Barrington Claims, Newday, Goody Market UK and TFLI have all been named and shamed in the ICO's latest crackdown on companies misusing text and phone-based marketing. In total, the ICO received hundreds of complaints from the public about these businesses, prompting investigations. It was discovered that Barrington Claims had made over 15 million automated calls about PPI between February 2016 and May 2016. Newday sent 44 million spam emails promoting its financial products between April 2015 and January 2017, sometimes using third parties to send emails to people who had subscribed to other websites owned by the firm. Goody Market was responsible for sending 111,367 spam texts using details bought from another firm by a data broker, while TFLI sent 1.19 million unsolicited text messages using details provided by other companies.

Nuisance call and spam text firms hit with £2m in fines by the ICO this year. A London firm behind over 156,000 spam texts has been fined £45,000 by the Information Commissioner’s Office (ICO). 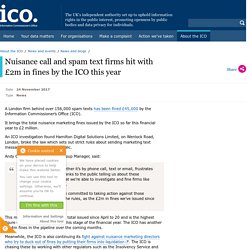 It brings the total nuisance marketing fines issued by the ICO so far this financial year to £2 million. An ICO investigation found Hamilton Digital Solutions Limited, on Wenlock Road, London, broke the law which sets out strict rules about sending marketing text messages to members of the public. Andy Curry, ICO Enforcement Group Manager, said: “Nuisance marketing, whether it’s by phone call, text or email, frustrates and angers people. It’s thanks to the public telling us about these troublesome messages that we’re able to investigate and fine firms like Hamilton Digital Solutions. This monetary penalty brings the total issued since April to 20 and is the highest figure ever issued by the ICO at this stage of the financial year. Mr Curry said: Company previously fined for making nuisance calls is prosecuted for failing to change its ways.

Cymraeg: Erlyn cwmni sydd wedi’i ddirwyo o’r blaen am fethu newid ei ffyrdd A company that has already been fined for making nuisance calls has now been prosecuted in a criminal court for continuing to break the law. 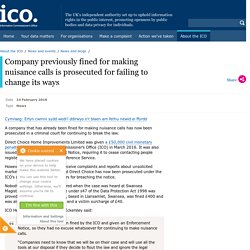 Direct Choice Home Improvements Limited was given a £50,000 civil monetary penalty by the Information Commissioner’s Office (ICO) in March 2016. It was also issued with a formal Enforcement Notice, requiring it to cease contacting people registered with the Telephone Preference Service. However, the ICO continued to receive complaints and reports about unsolicited marketing calls from the firm, and Direct Choice has now been prosecuted under the ICO’s criminal enforcement powers for breaching the notice. Nobody from the company appeared when the case was heard at Swansea Magistrates’ Court and an offence under s47 of the Data Protection Act 1998 was proved in absence. ICO Head of Enforcement Steve Eckersley said: Criminal penalties are imposed by the courts and not the ICO. 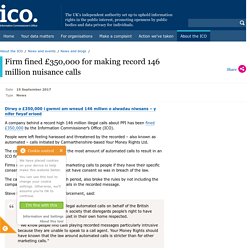 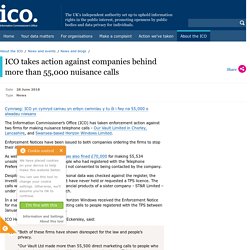 Enforcement Notices have been issued to both companies ordering the firms to stop their illegal marketing activity. As well as the notice, Our Vault was also fined £70,000 for making 55,534 unsolicited marketing calls to people who had registered with the Telephone Preference Service (TPS) and had not consented to being contacted by the company. Despite claiming that all their personal data was checked against the register, the investigation found that Our Vault have never held or requested a TPS licence.

The calls were designed to sell the financial products of a sister company - ST&R Limited – under the guise of market research. ICO Head of Enforcement, Steve Eckersley, said: Marketing firm fined £100,000 after making more than 75,000 nuisance calls. The Information Commissioner’s Office has fined an East Sussex marketing company £100,000 for making 75,649 nuisance calls. 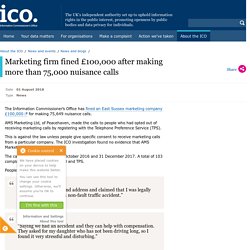 AMS Marketing Ltd, of Peacehaven, made the calls to people who had opted out of receiving marketing calls by registering with the Telephone Preference Service (TPS). This is against the law unless people give specific consent to receive marketing calls from a particular company. The ICO investigation found no evidence that AMS Marketing had done that. The calls were made between 1 October 2016 and 31 December 2017. West Yorkshire firms fined for nuisance calls to TPS subscribers. Two firms in West Yorkshire have been fined by the Information Commissioner’s Office (ICO) for calling people registered with the Telephone Preference Service (TPS). Bradford-based Energy Saving Centre Ltd, which offers services such as replacement windows and doors and guttering, made seven million calls over a seven month period without screening them against the TPS register. Solar energy firm receives record fine for automated nuisance calls.

A green energy company which plagued consumers with millions of nuisance phone calls offering ‘free’ solar panels has received a record fine from a Government watchdog for “deliberately and recklessly” breaching marketing regulations. Home Energy & Lifestyle Management Ltd (Helms), based in Glasgow, has been slapped with a £200,000 fine by the Information Commissioner’s Office (ICO) after pestering householders with millions of automated calls on an “industrial scale”. An ICO investigation found that Helms made over six million calls as part of a massive automated call marketing campaign offering ‘free’ solar panels.

It said an organisation should have individuals’ permission – which specifically names the company concerned – in order to make automated calls, yet this was not the case. Helms – an accredited company in the failed Government Green Deal initiative to help people make energy saving improvements to their homes – admitted it didn’t even know what the rules were. Stockport firms fined for nuisance calls and spam texts. ICO fines Manchester firm £150,000 for making nuisance calls. A Manchester firm has been fined £150,000 by the Information Commissioner’s Office (ICO) for making thousands of nuisance direct marketing phone calls. Oaklands Assist UK Ltd based in Radcliffe, made 63,724 calls over a two month period from May to July 2017 to people who were registered with the Telephone Preference Service (TPS).

The law states that live calls must not be made to any number registered with the TPS unless they have specifically consented to the call. This was in breach of the Privacy and Electronic Communications Regulations (PECR). The company first came to the ICO’s attention in June 2017 when it was identified as one of its most complained about organisations during that month. There were 59 complaints which included: “Caller was extremely abusive when asked how they got our details. ICO Director of Investigations, Steve Eckersley, said: “Companies that operate in this way are causing distress and offence to huge numbers of people who just don’t want these calls.