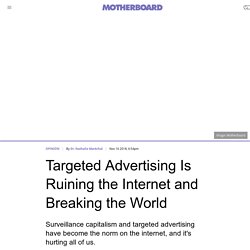 Follow along. Listen to Motherboard’s new hacking podcast, CYBER, here. Dr. Nathalie Maréchal is a senior research fellow at Ranking Digital Rights , where she studies the impact of information and communication technology companies’ business practices on human rights. In his testimony to the US Senate last spring, Facebook CEO Mark Zuckerberg emphasized that his company doesn’t sell user data, as if to reassure policymakers and the public. Social media companies are advertising companies. For a while this seemed like a win-win: people around the world could watch cat videos, see pictures of each others' babies in Halloween costumes, connect with family, friends, and colleagues around the globe, and more. 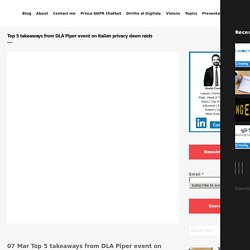 Here are the main takeaways from our event on the matter. On the 1st of March 2019, DLA Piper had the pleasure to host – together with AIGI – an event on Italian privacy dawn raids that had as main speaker, Mr. Marco Menegazzo, the head of the department of the tax police in charge of privacy dawn raids, supporting the Italian data protection authority (the Garante) on their performance. Other speakers included Cristina Cabella, Chief Privacy Officer at IBM, Sandra Mori, Data Privacy Officer Europe at Coca-Cola, and Laura Botticini, Head of Legal Support on Labour, Safety and Privacy at A2A that gave their perspective on the most relevant issues to be dealt during privacy dawn raids and in general in the performance of their activity in large corporations. 1. 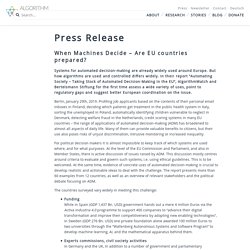 But how algorithms are used and controlled differs widely. In their report “Automating Society – Taking Stock of Automated Decision-Making in the EU“, AlgorithmWatch and Bertelsmann Stiftung for the first time assess a wide variety of uses, point to regulatory gaps and suggest better European coordination on the issue. Berlin, January 29th, 2019. Profiling job applicants based on the contents of their personal email inboxes in Finland, deciding which patients get treatment in the public health system in Italy, sorting the unemployed in Poland, automatically identifying children vulnerable to neglect in Denmark, detecting welfare fraud in the Netherlands, credit scoring systems in many EU countries – the range of applications of automated decision-making (ADM) has broadened to almost all aspects of daily life.

C110515S. Ive Got Nothing to Hide and Other Misunderstandings of Privacy. Young will have to change names to escape 'cyber past' warns Google's Eric Schmidt. "We're trying to figure out what the future of search is," Mr Schmidt said. 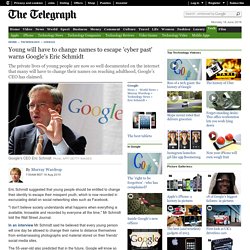 “One idea is that more and more searches are done on your behalf without you needing to type. "I actually think most people don't want Google to answer their questions. They want Google to tell them what they should be doing next. " He suggested, as an example, that because Google would know “roughly who you are, roughly what you care about, roughly who your friends are”, it could remind users what groceries they needed to buy when passing a shop. The comments are not the first time Mr Schmidt has courted controversy over the wealth of personal information people reveal on the internet.

Why Do We Care So Much About Privacy? The lone dissenter was William O. Douglas. Douglas was a judicial renegade, with little concern for precedent. “We write,” he began his dissent, “on a clean slate.” Finding no rule, he provided one. Freedom was the issue, he explained, and “the beginning of all freedom” is “the right to be let alone”—that is, the right to privacy. Douglas did not coin the phrase “the right to be let alone.” Igo’s first book, “The Averaged American,” was a well-received study of how twentieth-century social researchers created the idea of a “mass public.”

Www.theregister.co. A month after the enforcement date of the General Data Protection Regulation – a law that businesses had two years to prepare for – many websites are still locking out users in the European Union as a method of compliance. 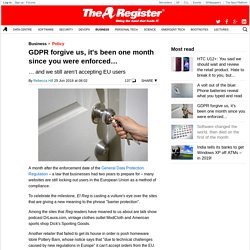 To celebrate the milestone, El Reg is casting a vulture's eye over the sites that are giving a new meaning to the phrase "barrier protection". Among the sites that Reg readers have moaned to us about are talk show podcast DrLaura.com, vintage clothes outlet ModCloth and American sports shop Dick's Sporting Goods. 10358_EUn_GMCQ Autumn 2_2015_E. European Union Model Clauses. EPIC - Electronic Privacy Information Center. 12 Reasons Why Data Privacy Protection Brings Business Value. Internet Privacy Laws in America: A Guide to All 50 States. 18-12-20_guidance_on_article_25_en.