Governments may be big backers of the Blockchain. IN THE hills overlooking Tbilisi, Georgia’s capital, sits a nondescript building housing rows of humming computer servers. 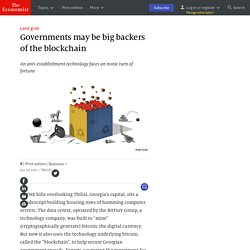 The data centre, operated by the BitFury Group, a technology company, was built to “mine” (cryptographically generate) bitcoin, the digital currency. But now it also uses the technology underlying bitcoin, called the “blockchain”, to help secure Georgian government records. Experts are eyeing the experiment for proof of whether blockchain technology could alter the infrastructure of government everywhere. The digital agenda of virtual currencies final. Blockstack: An Open Source Browser Powered By Blockchain For Creating A New Internet. Short Bytes: Blockstack, a blockchain startup, has released a decentralized browser to make an internet that would be free from dependence on large organizations and key players. 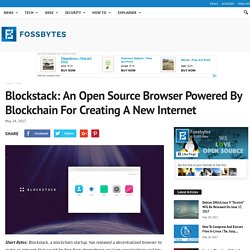 The makers of Blockstack browser have called it the Netscape of the decentralized internet for running and making apps. A developer release of Blockstack browser is available, and a user version will arrive in six months. Bitcoin-Inspired Computer Algorithms Could Help Save the Planet. Magic internet money—also known as cryptocurrency—is at an all-time high. 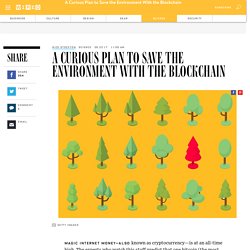 The experts who watch this stuff predict that one bitcoin (the most famous cryptocurrency) will soon be worth $2,000. The big selling point of cryptocurrencies like bitcoin is their use of something called the blockchain to make any transaction mossstly trustworthy. In a cryptocash economy, the blockchain renders treasuries, banks, credit cards, and other financial organs vestigial. Enthusiasts believe these decentralized, cryptographically sealed databases could starve inefficient middlemen from virtually any system.

And today in Nature, conservation biologist Guillaume Chapron argues that blockchains can even save the planet. What next for blockchain? The conversation around blockchain is changing. 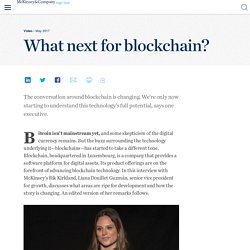 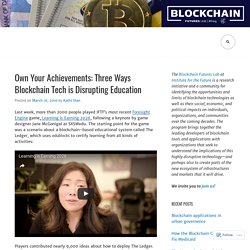 The starting point for the game was a scenario about a blockchain-based educational system called The Ledger, which uses edublocks to certify learning from all kinds of activities: Players contributed nearly 9,000 ideas about how to deploy The Ledger. Credentials, Reputation, and the Blockchain. Using the blockchain and strong cryptography permits creating certifications that put us in control of the full record of our achievements. 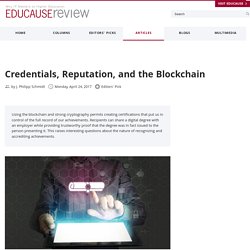 Recipients can share a digital degree with an employer while providing trustworthy proof that the degree was in fact issued to the person presenting it. This raises interesting questions about the nature of recognizing and accrediting achievements. The trail of credentials and achievements that we generate throughout our lives says something about who we are, and it can open doors that allow us to become who we want to be. Malta’s Prime Minister Says Europe Should Become the Bitcoin Continent. The Prime Minister of Malta, Dr. 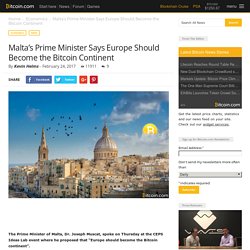 Joseph Muscat, spoke on Thursday at the CEPS Ideas Lab event where he proposed that “Europe should become the Bitcoin continent”. Also read: Bitspark Enters $20 Billion Pakistani Remittance Market. Times of Malta ‒ The Blockchain disruption. A Blockchain is an innovation that comprises many different aspects, the main ones being: mathematics, cryptography, computer science, networking and social engineering. 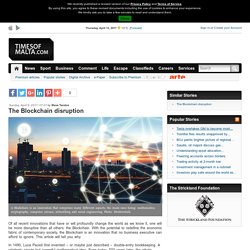 Photo: Shutterstock. Of all recent innovations that have or will profoundly change the world as we know it, one will be more disruptive than all others: the Blockchain. With the potential to redefine the economic fabric of contemporary society, the Blockchain is an innovation that no business executive can afford to ignore. This article will tell you why. Blockchain News - Distributed Ledger Technology, ICO, Crowdfunding. Using blockchain to improve data management in the public sector.

It’s not just for financial institutions; government agencies can use this digital ledger technology to protect trusted records and simplify interactions with citizens. 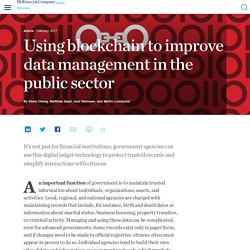 An important function of government is to maintain trusted information about individuals, organizations, assets, and activities. Local, regional, and national agencies are charged with maintaining records that include, for instance, birth and death dates or information about marital status, business licensing, property transfers, or criminal activity. Managing and using these data can be complicated, even for advanced governments. Some records exist only in paper form, and if changes need to be made in official registries, citizens often must appear in person to do so. Individual agencies tend to build their own silos of data and information-management protocols, which preclude other parts of the government from using them.

The Blockchain for Education: An Introduction. 16 min read Is blockchain poised to be “the next big thing” in education? 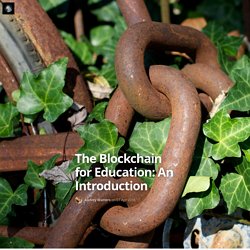 This has become a question I hear with increasing frequency about a technology that, up until quite recently, was primarily associated with the cryptocurrency Bitcoin. The subtext to the question, I suppose: do educators need to pay attention to the blockchain? What, if anything, should they know about it? Admittedly, I haven’t bothered to learn much about blockchain or Bitcoin either, despite the last few years of zealous headlines in various tech publications.