The Frequency Wars. Under What Conditions Can The US Army Engage Citizens: The Army's "Civil Disturbances" Primer. With events in Ferguson deteriorating from day to day, despite the arrival of the Missouri National Guard, some have asked what further escalation steps are possible. 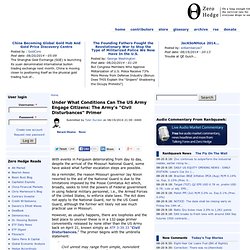 As a reminder, the reason Missouri governor Jay Nixon resorted to the aid of the National Guard is due to the limitations imposed by the Posse Comitatus Act which, broadly, seeks to limit the powers of Federal government in using federal military personnel, i.e., the Armed Forces of the United States, to enforce state laws. The Act does not apply to the National Guard, nor to the US Coast Guard, although the former will likely not see much practical use in Missouri. However, as usually happens, there are loopholes and the best place to uncover these is in a 132-page primer conveniently released by none other than the US Army back on April 21, known simply as ATP 3-39.33 "Civil Disturbances.

" The primer begins with the umbrella statement: What circumstances? Why Are Federal Agencies Preparing For Domestic War? By John W. 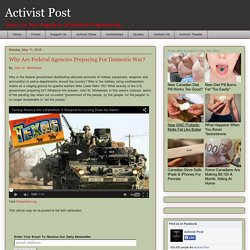 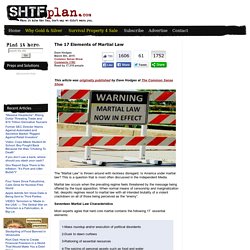 The “Martial Law” is thrown around with reckless disregard. Is America under martial law? This is a question that is most often discussed in the Independent Media. Martial law occurs when the prevailing regime feels threatened by the message being offered by the loyal opposition. When normal means of censorship and marginalization fail, despotic regimes resort to martial law with all intended brutality of a violent crackdown on all of those being perceived as the “enemy”. Will Food Stamps Start American Civil War/Martial Law? (SERIOUS WARNING)