Past Perfect. [had + past participle] Examples: You had studied English before you moved to New York. 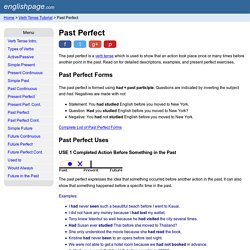 We had had that car for ten years before it broke down. Although the above use of Past Perfect is normally limited to Non-Continuous Verbs and non-continuous uses of Mixed Verbs, the words "live," "work," "teach," and "study" are sometimes used in this way even though they are NOT Non-Continuous Verbs. Charming means. Smithsonian Channel. Do Plants Respond to Pain? Frenchman rides solar bike to Japan. Aviary shot. DC's Chinatown has only 300 Chinese American left. Liza Donnelly: Drawing on humor for change. Liza Donnelly : Des dessins humoristiques pour apporter le changement.

Shane Koyczan: To This Day ... for the bullied and beautiful. Amanda Palmer: The art of asking. Learn English with EnglishClass101.com. TOEIC Speaking Practice Part 6 - TOEIC - Teacher Michael. PART I. 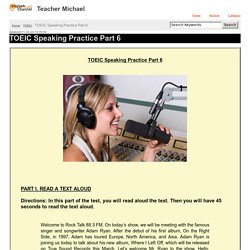 READ A TEXT ALOUDDirections: In this part of the test, you will read aloud the text. Then you will have 45 seconds to read the text aloud. Welcome to Rock Talk 88.3 FM. On today’s show, we will be meeting with the famous singer and songwriter Adam Ryan. After the debut of his first album, On the Right Side, in 1997, Adam has toured Europe, North America, and Asia. PART II. PART III. In your response, be sure to • show that you recognize the problem, and • propose a way of dealing with the problem. Now listen to this: Hi, uh, this is Ron Thomas. PART V. Do you agree that taking time off from work can enhance the performance of workers?

3 Years of Travel in 3 Minutes (Lessons and Adventures)