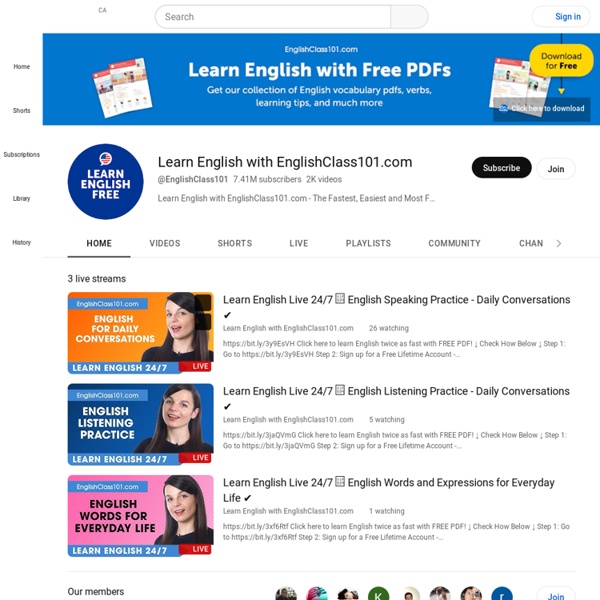 Max & Harvey We want everyone to know that we love The Vamps and all of their fans. When our producer played us this song for the first time, we loved it so much that we had to do our own version! Thank you all for the support and love - you make every day amazing ❤️ Real World ESL: August 2010 - audio biographies FAITH LAPIDUS: This is SCIENCE IN THE NEWS in VOA Special English. I'm Faith Lapidus. BOB DOUGHTY: And I'm Bob Doughty. PET B1 SPEAKING PART 1 EXERCISE 1 free practice test, free exercise, Cambridge English: Preliminary test - englishaula.com Instructions: In this exercise the candidate has a conversation with the examiner about personal issues for two minutes. A set of typical questions is given and the student is required to generate appropriate answers. When you know what you want to say, click on the RECORD ANSWER button to record your answer. When you have finished recording, click on the STOP RECORDING button.

American Accents - Test Your Listening Comprehension American Accents - Test Your Listening Comprehension Test your American English comprehension by listening to these videos of various American accents! I urge you - don't just listen, shadow! If you hear an accent had by your client, listen, stop the video and mimic it! It will help your listening comprehension when talking with your clients, as well! This first video showcases the following accents: Classic AmericanValley Girl (California, San Fernando Valley, actually; a sociolect)OklahomaTexasNorth CarolinaKentuckyNew YorkEbonics(This term is avoided by linguists.

The 50 Most Educational YouTube Channels for Kids - Early Childhood Education Zone The Spangler Effect is the perfect place for young scientists that love to make things fizz, pop and explode. This channel was created by a science teacher with a love of creating unforgettable and exciting experiments for your children to enjoy. One of his most popular videos is called “Can Crusher” It will show your kids an awesome way to make a can automatically get crushed by atmospheric pressure when they put it in water.

Speaking Topics in B1 ESOL Entry Level 3 Exams The speaking topics for B1 ESOL Exams are the kind of things people talk about in everyday life. These topics typically include: Home, Family and Friends, Work and School, Likes and Dislikes and Weather. Here are some topics that may help you familiarise yourself with the exam. Family and Friends: • Are you married? • Tell me about your family. • Do you have a big or a small family? Arab Nations Cut Ties with Qatar Saudi Arabia, Egypt and several Arab nations have ended diplomatic relations with their Gulf neighbor, Qatar. The move follows criticism over Qatar’s support of what many Arab nations consider terrorist organizations. Adding to the conflict is Qatar’s close ties to Iran, Saudi Arabia’s rival. Bahrain, the United Arab Emirates, Yemen, the Maldives and a government group in Libya also ended diplomatic relations with Qatar on Monday. The state-owned Saudi Press Agency said Qatar supports “terrorist and sectarian groups aimed at disturbing stability in the region, including the Muslim Brotherhood, Islamic State, and al-Qaida.”