A worrying trend: India's new economy can not be a monopoly board. Two years ago, India rolled out a laudable plan to unlock the capital trapped in some of its smaller airports. 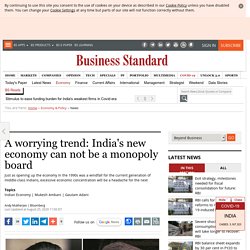 But the actual outcome from privatisation was less than reassuring: All six airfields put on the block went to one bidder. If that wasn’t enough, multiple media reports now say that Ahmedabad, Gujarat-based billionaire Gautam Adani, an early and enthusiastic supporter of Prime Minister Narendra Modi, might also succeed in taking control of the already-privatised Mumbai airport, as well as a new one coming up on the financial center’s outskirts. Airports are natural monopolies. To have one private owner controlling eight or more — a fresh batch of six will soon go under the hammer — can’t possibly be great news for airlines, fliers, or businesses operating from the premises.

The splashy 2016 entry of tycoon Mukesh Ambani in 4G mobile was a huge boon. The worry is that dominance by a handful of capitalists may not leave enough space for others. Severe shock to consumption, economy will take longer to recover: RBI. The contraction in economic activity will likely prolong as states reimposed stricter lockdowns, the annual report of the Reserve Bank of India (RBI), released on Tuesday morning, said. 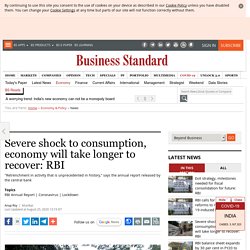 It is important to withdraw the stimulus measures once the cure to Covid-19 is found, the report adds. High frequency indicators so far pointed to a “retrenchment in activity that is unprecedented in history,” the annual report said, adding, “the upticks that became visible in May and June after the lockdown was eased in several parts of the country, appear to have lost strength in July and August, mainly due to reimposition or stricter imposition of lockdowns, suggesting that contraction in economic activity will likely prolong into the second quarter.”

The central bank noted that the shock to consumption is severe, and it will take quite some time to mend and regain the pre- pandemic momentum. Tata Motors group says will cut consolidated debt to zero in 3 years. Reducing debt, and improving the product portfolio will top the priority of Tata Motors, said N Chandrasekaran chairman of the company, at a shareholders' meeting on Tuesday. 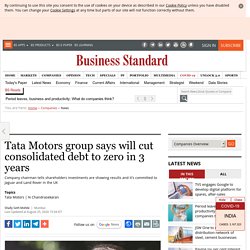 “Currently the TML group has a net automotive debt of Rs 48,000 crore and currently we are deleveraging this business substantially. The target is to bring it to near zero debt levels in the next three years. Towards this, the company has already taken steps. This includes making the company free cash flow positive by FY22. The TML group, he added will also look to unlock investment in various non-core businesses. Tata Motors is committed to its UK venture Jaguar and Land Rover, he told the company’s 75th Annual General Meeting. Covid-19 crisis: Tally crosses 3 million; share of top 10 districts falling. The prevalence of Covid-19 cases in the country is becoming less concentrated, indicating that the cases are increasingly spreading beyond the urban pockets, which first saw a large spike. 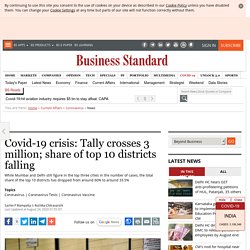 This may pose a challenge as rural healthcare infrastructure is less developed than in urban areas. The number of cases, meanwhile, has shot past three million. While Mumbai and Delhi still figure in the top three cities in the number of cases, the total share of the top 10 districts has dropped from around 60 per cent to around 33.5 per cent (chart 1). Phoenix Mills up 6% on Rs 1,100 cr QIP; Govt of Singapore picks 4.3% stake. Shares of real estate developer The Phoenix Mills jumped nearly 6 per cent to Rs 737.15 per share on the BSE on Monday after the company raised Rs 1,100 crore via its Qualified Institutional Placement (QIP). 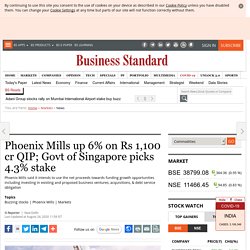 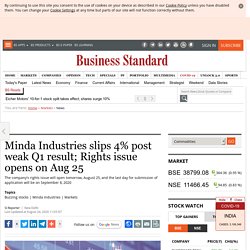 The auto ancilliary firm's standalone net loss came in at Rs 53.11 crore as against Rs 31.6 crore profit in the year-ago period. On a quarterly basis, the loss came against a profit of Rs 5.17 crore. Besides, its revenue from operation tumbled 73 per cent YoY to Rs 228.16 crore, down from Rs 836.1 crore reported in Q1FY20. The Gurugram-based company reported an exceptional loss of Rs 81.47 crore during the quarter under review.

Moreover, its EBITDA (earnings before interst, tax, depreciation and amortisation) loss stood at Rs 71 crore, down from EBITDA of Rs 172 crore in Q1FY20. The company's rights issue will open tomorrow, August 25, and the last day for submission of application will be on September 8, 2020. Indiabulls Housing Finance up 3% after Q1 nos; other group stocks gain too. Shares of Indiabulls Housing Finance gained over 3 per cent on Monday after the company declared its financial results for the quarter ended June 2020 (Q1FY21). 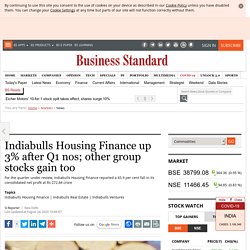 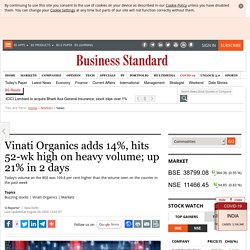 At 12:30 pm, the stock was up 9.62 per cent on the BSE, as against 0.86 per cent rise in the benchmark S&P BSE Sensex. Today'a high was the stock's 52-week high on the National Stock Exchange (NSE). With today's intra-day gain, the stock has leaped 21 per cent in two days on the NSE from a level of Rs 992 touched on August 19, 2020. A combined 1.59 million shares had changed hands on the counter on the NSE and BSE till the time of writing of this report. Of this, 0.13 million shares had changed hands on the BSE, which was 109.8 per cent higher than the volume seen on the counter on the BSE in the past week. For June quarter of FY21, Vinati Organics posted a standalone net profit of Rs 72.29 crore, down 12.21 per cent, from Rs 74.62 crore reported in the year-ago quarter. 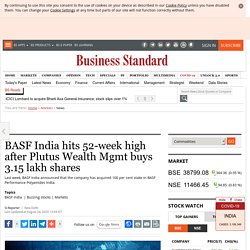 At 12:39 PM, the stock was ruling at 1,739.95 up 7.6 per cent on the BSE as compared to 0.9 per cent rise in the benchmark S&P BSE Sensex. Last week, BASF India announced that the company has acquired 100 per cent stake in BASF Performance Polyamides India from BASF Nederland B.V. and BASF SE for an aggregate consideration of Rs 302.90 crore. For the quarter ended June 2020, BASF India reported widening of its net loss to Rs 29.15 crore due to higher expenses. The company had posted a net loss of Rs 8.2 crore in the same quarter of previous fiscal. 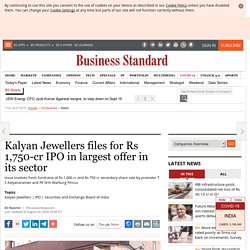 The issue consists of fresh fundraise of Rs 1,000 crore and Rs 750 crore secondary share sale by promoter T S Kalyanaraman and private equity firm Warburg Pincus. The IPO will be largest-ever by a jewellery retail brand in the domestic market. Axis Capital, Citibank, ICICI Securities, SBI Caps and BOB Capital Markets are the investment bankers handling the issue. Kalyan Jewellers plans to use Rs 1,000 crore to fund its working capital and for other corporate purposes. Kalyan Jewellers is one of the largest jewellery companies in India based on revenue as of March 31, 2020, according to Technopak report. Eicher Motors' 10-for-1 stock split takes effect; shares surge 10% Eicher Motors surged 10 per cent to Rs 2,389 on the BSE on Monday after the stock turned ex-date for stock split in the ratio 1:10. The company has fixed August 25, 2020 as record date for the stock split.

The company announced, on May 25, its stock split plan to make the stock more affordable for the small retail investors and increase liquidity. Tata Steel, JSPL: Morgan Stanley bullish on steel stocks; do you own any? Beaten down metal stocks, such as Tata Steel Hindalco, Vedanta, and JSW Steel, have seen a sharp reversal in their trading pattern and have surged up to 141 per cent between March and August, 2020. Supported by strong domestic demand in China, increase in raw material prices, healthy exports, and rebound in domestic demand, global brokerage Morgan Stanley believes the Indian steel industry's profitability cycle is turning faster with a sharp rebound in 2Q itself. Coronavirus LIVE: 8,601 new Covid-19 cases in Andhra Pradesh; tally 361,712. Motherson's Sehgal aims to triple sales by 2025; here's why he can do it.

Vivek Chaand Sehgal has a track record of achieving the seemingly impossible. His company, a sprawling parts supplier to the world’s biggest carmakers, has exceeded its five-year target every time bar one in the past quarter century. Future Retail averts default, pays Rs 100 crore interest on bonds. Future Retail has managed to avert a default by paying Rs 100 crore of interest on its foreign bonds on Monday. The interest was paid on the last date of the 30-day grace period granted by the bondholders of the $500 million senior secured notes.

Future Retail stock was trading 8 per cent down at Rs 113 a share on Monday. The funds for paying interest to the foreign bondholders were raised from banks which are negotiating a sale of Future’s business to Reliance Industries. A Future official confirmed that the bondholders were paid their dues today. The company has defaulted on July 22 and Future had said it will be able to make the coupon payment within the grace period by improving operating cash flow through bank funding; or arranging for alternate sources of funding, including the sale of certain assets. As per sources, the group is in final stages of a sale deal. It was very important for Future to avert the default so that it can go ahead with the sale transaction with RIL. Great human who had no parallels: Shah on Arun Jaitley's death anniversary. Union Ministers including Home Minister Amit Shah on Monday paid tribute to former Cabinet Minister and BJP stalwart Arun Jaitley on his death anniversary.

Increased traffic in key cities are also among indicators pointing to people stepping out of their homes as the economic cost of the lockdown forced the government to gradually reduce restrictions. Bank stks in focus; Nifty Bank adds over 2.5%; IDFC First gains 7%, SBI 2% At least 5% of PNB's Rs 7.21 trillion loan book may be restructured. Latest News LIVE update: Rahul Gandhi questions timing of letter to Sonia. Wedding bells to the rescue of five-star hotel chains amid pandemic. MARKET LIVE: Sensex near day's high, up 350 points; financials in focus.

Great human who had no parallels: Shah on Arun Jaitley's death anniversary. Sushant Singh Rajput case: CBI's record doesn't inspire confidence in probe. Whenever there is a need for an impartial probe, be it criminal or corruption, there are demands to hand it over to the Central Bureau of Investigation (CBI). This is because not just people and the government, even the judiciary fear that state investigative agencies may work in the interest of politicians or could botch-up cases due to sheer incompetence.

Job losses among salaried employees likely to get worse: CMIE's Mahesh Vyas. India’s salaried jobs are seeing the impact of Covid-induced lockdowns play out more slowly, and it will be more difficult to get these jobs back, Mahesh Vyas, managing director of the Centre for Monitoring Indian Economy (CMIE), says. The number of salaried people who have lost their jobs amid the Covid-19 pandemic has now surged to 18.9 million, and about 5 million jobs were lost in July alone, CMIE finds. Put gender equality at the heart of post-Covid-19 economic recovery: ILO.

The coronavirus pandemic is disproportionately affecting women workers and governments should prioritise policies that offset the effects the crisis is having on their jobs, International Labour Organisation (ILO) has said. Before the onset of Covid-19, many women were excluded from the labour market. The pandemic has made things much worse, said Valeria Esquivel, ILO senior employment policies and gender officer.

"It is disproportionately affecting women workers who are losing their jobs at a greater speed than men. More women than men work in sectors that have been hard hit by the economic fallout from pandemic like as tourism, hospitality and garment sector. " Spectacles believed to be worn by Gandhi sell for record 260K pounds in UK. West Bengal's Covid-19 tally climbs to 135,596 with 3,232 new infections. Future Enterprises board meet on group firms' merger postponed by a week. Govt to hire Deloitte, SBI Capital Markets to help LIC prepare for IPO. We are not Chinese but homegrown Indian brand: IPL title sponsor Dream11.