Selecting the US presidential candidates: a short guide to the primary system. The selection of the Republican and Democratic candidates for November’s US presidential election, beginning on Monday with the Iowa Caucus, will be followed with interest around the world. 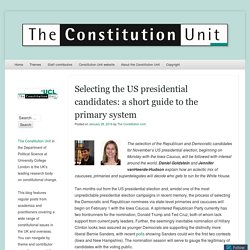 Daniel Goldstein and Jennifer vanHeerde-Hudson explain how an eclectic mix of caucuses, primaries and superdelegates will decide who gets to run for the White House. Two myths about the unruly American primary system. The symbols of the Democratic (donkey) and Republican (elephant) parties on display in Washington in 2008. 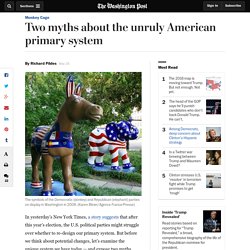 (Karen Bleier/Agence France-Presse) In yesterday’s New York Times, a story suggests that after this year’s election, the U.S. political parties might struggle over whether to re-design our primary system. But before we think about potential changes, let’s examine the unique system we have today — and expose two myths usually told about how we got here. Many Americans will be surprised to learn that few democracies give primary elections a dominant role in selecting their parties’ nominees for the country’s highest office. America's Primary Elections Are Broken. When it was all said and done and the final results were tallied, former Secretary of State Hillary Clinton and Vermont Sen. 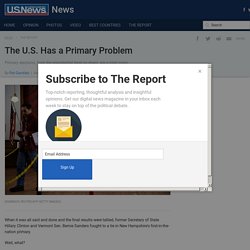 Bernie Sanders fought to a tie in New Hampshire's first-in-the-nation primary. Yes, Sanders won the election in the Granite State by a whopping 22 points, dealing what was trumpeted from coast to coast as a major blow to the Clinton campaign and its oft-mentioned "inevitability" ahead of Saturday's Nevada caucus. But when the delegates were doled out – and in presidential nomination races, they're the number that really matters – each camp walked out of New Hampshire with at least 15.

That's because Clinton, while losing the state's allocated delegates 15-9, has the support of six New Hampshire "superdelegates," party insiders who get to cast a vote at the nominating convention divorced from any election result. Undemocratic? Let's start at the top: Our system for choosing presidential nominees makes little sense. Which brings us to our second problem: caucuses. 5 Reasons the Presidential Primary System Is in Need of Reform. Co-authored by Chance Strickland, Political Hobbyist & Educator in Waiting Every four years we see the same song and dance: a diverse mix of party elders, rising stars and professional agitators competing for their party’s nomination to the highest political office our nation has to offer. 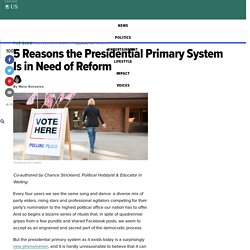 And so begins a bizarre series of rituals that, in spite of quadrennial gripes from a few pundits and shared Facebook posts, we seem to accept as an engrained and sacred part of the democratic process. But the presidential primary system as it exists today is a surprisingly new phenomenon, and it is hardly unreasonable to believe that it can and should be overhauled. Below are just a few reasons why that’s exactly what needs to be done. 1. 2. Everything you need to know about how the presidential primary works. Caucus participants place their votes in a basket at the local community center in downtown Rock Rapids, Iowa on January 3, 2012. 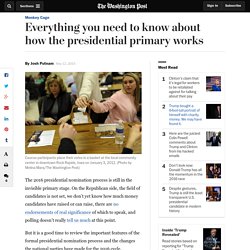 (Photo by Melina Mara/The Washington Post) The 2016 presidential nomination process is still in the invisible primary stage. On the Republican side, the field of candidates is not set, we don’t yet know how much money candidates have raised or can raise, there are no endorsements of real significance of which to speak, and polling doesn’t really tell us much at this point. Compared to primaries, caucuses are less representative and more likely to select an ideologically extreme nominee. The next 19 months will see nearly endless speculation over the candidates and the outcome of the 2016 presidential election. 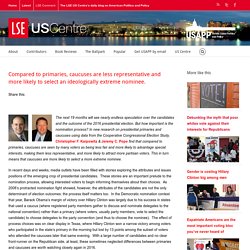 But how important is the nomination process? In new research on presidential primaries and caucuses using data from the Cooperative Congressional Election Study, Christopher F. Karpowitz & Jeremy C. Pope find that compared to primaries, caucuses are seen by many voters as being less fair and more likely to advantage special interests, making them less representative, and more likely to attract more partisan voters.

This in turn means that caucuses are more likely to select a more extreme nominee. Primaries and Democracy. Iowa and New Hampshire skew primary process – GOP Drop-Out Race – How few Americans have voted, in charts – Following the announcement this week that Chris Christie and Carly Fiorina are suspending their campaigns, students should be looking to evaluate the democratic nature of primaries in the USA. 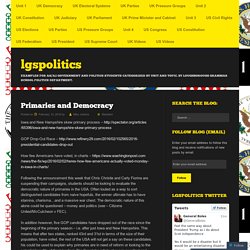 Often touted as a way to sort distinguished candidates from naive hopefuls, the winner ultimate has to have stamina, charisma…and a massive war chest. The democratic nature of this alone could be questioned – money and politics (see – Citizens United/McCutcheon v FEC). In addition however, five GOP candidates have dropped out of the race since the beginning of the primary season – i.e. after just Iowa and New Hampshire. As a much thinner field advances on towards the next primary, Americans will have much less choice…seemingly an anti-democratic feature of these elections. Like this:

Back to the Future: 2016 and the 1968 Democratic Primary. Eugene McCarthy, a candidate for the presidential nomination of the Democratic Party, speaking at his New York headquarters. 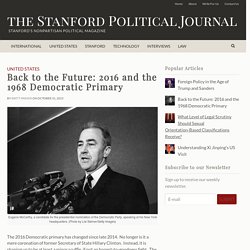 (Photo by Lisl Steiner/Getty Images) The 2016 Democratic primary has changed since late 2014. No longer is it a mere coronation of former Secretary of State Hillary Clinton. Instead, it is shaping up to be at least a minor scuffle, if not an honest-to-goodness fight. The overwhelming favorite, Clinton, has been wounded by her questionable recordkeeping practices, and is suddenly in a tight race with liberal champion Bernie Sanders in the early primary state of New Hampshire. Some Clinton allies see lost cause in New Hampshire. MANCHESTER, N.H. — Hillary Clinton is losing in New Hampshire, and at least one small contingent of family allies thinks it’s nearly time to cut bait. 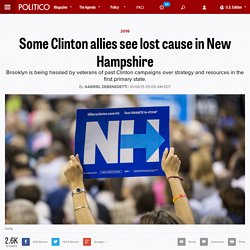 The 2016 Endorsement Primary. If you think super PACs have changed everything about the presidential primary, think again. Your Republican presidential field, minus the guy in the glasses. 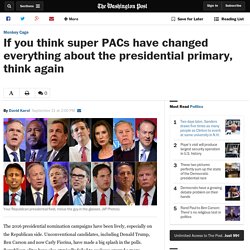 (AP Photos) The 2016 presidential nomination campaigns have been lively, especially on the Republican side. Unconventional candidates, including Donald Trump, Ben Carson and now Carly Fiorina, have made a big splash in the polls. Republican elites have also atypically failed to coalesce around a more conventional candidate so far. Every campaign brings its surprises. On Sunday, the New York Times’s Adam Nagourney and Jonathan Martin suggested that the modifications to the rules Republicans adopted after 2012 leave the GOP vulnerable to Trump, a prospect that fills many Republican operatives with dread. It is far from clear that Trump will retain his current level of support.

As ‘SEC primary’ takes shape, will presidential contenders show up? Georgia Secretary of State Brian P. Kemp sat at his state’s GOP convention this month and listened to not one, not two, but three potential presidential contenders. Everything you need to know about how the presidential primary works. Caucus participants place their votes in a basket at the local community center in downtown Rock Rapids, Iowa on January 3, 2012. (Photo by Melina Mara/The Washington Post) The 2016 presidential nomination process is still in the invisible primary stage. On the Republican side, the field of candidates is not set, we don’t yet know how much money candidates have raised or can raise, there are no endorsements of real significance of which to speak, and polling doesn’t really tell us much at this point.