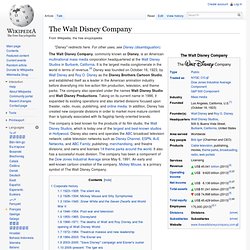 After the bankruptcy in 1923 of his previous firm, Laugh-O-Gram Films,[ChWDC 1] Disney moved to Hollywood to join his brother Roy O. Disney. Film distributor Margaret J. In January 1926 with the completion of the Disney studio on Hyperion Street, the Disney Brothers Studio's name was changed to the Walt Disney Studio. After the demise of the Alice comedies, Disney developed an all-cartoon series starring his first original character, Oswald the Lucky Rabbit,[5] which was distributed by Winkler Pictures through Universal Pictures. 1928–1934: Mickey Mouse and Silly Symphonies[edit] Original poster for Flowers and Trees (1932) 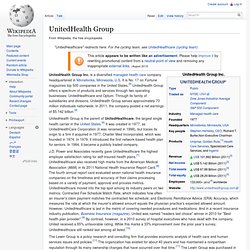 In 1979, it introduced the first network-based health plan for seniors. UnitedHealth Group - Health Benefits & Services - Home. Procter & Gamble. History[edit] William Procter, a candlemaker, and James Gamble, a soapmaker, both born in the United Kingdom of Great Britain and Ireland, emigrated from England and Ireland respectively. 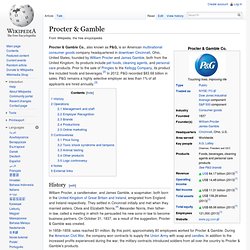 They settled in Cincinnati initially and met when they married sisters, Olivia and Elizabeth Norris.[4] Alexander Norris, their father-in-law, called a meeting in which he persuaded his new sons-in-law to become business partners. On October 31, 1837, as a result of the suggestion, Procter & Gamble was created. In 1858–1859, sales reached $1 million. By this point, approximately 80 employees worked for Procter & Gamble. G UK and Ireland: consumer product company, best brands, sustainability, news. Fast Foods. McDonald's. The McDonald's Corporation is the world's largest chain of hamburger fast food restaurants, serving around 68 million customers daily in 119 countries.[4][5] Headquartered in the United States, the company began in 1940 as a barbecue restaurant operated by Richard and Maurice McDonald; in 1948 they reorganized their business as a hamburger stand using production line principles. 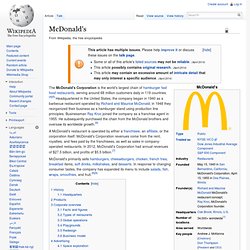 Businessman Ray Kroc joined the company as a franchise agent in 1955. He subsequently purchased the chain from the McDonald brothers and oversaw its worldwide growth.[6] History McDonald's corporate logo used from November 18, 1968 to 2006. It still exists at some restaurants. McDonalds.com. Pfizer. Pfizer, Inc. 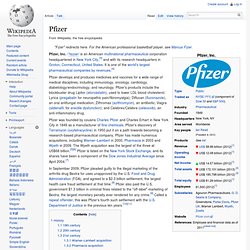 /ˈfaɪzər/ is an American multinational pharmaceutical corporation headquartered in New York City,[3] and with its research headquarters in Groton, Connecticut, United States. It is one of the world's largest pharmaceutical companies by revenues.[4] Pfizer develops and produces medicines and vaccines for a wide range of medical disciplines, including immunology, oncology, cardiology, diabetology/endocrinology, and neurology. Pfizer's products include the blockbuster drug Lipitor (atorvastatin), used to lower LDL blood cholesterol; Lyrica (pregabalin for neuropathic pain/fibromyalgia); Diflucan (fluconazole), an oral antifungal medication; Zithromax (azithromycin), an antibiotic; Viagra (sildenafil, for erectile dysfunction); and Celebrex/Celebra (celecoxib), an anti-inflammatory drug. Pfizer was founded by cousins Charles Pfizer and Charles Erhart in New York City in 1849 as a manufacturer of fine chemicals. Pfizer: the world's largest research-based pharmaceutical company. 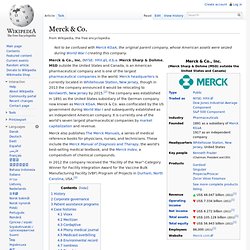 (NYSE: MRK), d.b.a. Merck Sharp & Dohme, MSD outside the United States and Canada, is an American pharmaceutical company and is one of the largest pharmaceutical companies in the world. Merck headquarters is currently located in Whitehouse Station, New Jersey, though in 2013 the company announced it would be relocating to Kenilworth, New Jersey by 2015.[2] The company was established in 1891 as the United States subsidiary of the German company now known as Merck KGaA.

Merck & Co. was confiscated by the US government during World War I and subsequently established as an independent American company. It is currently one of the world's seven largest pharmaceutical companies by market capitalization and revenue. A global healthcare leader working to help the world be well. Johnson & Johnson. Johnson & Johnson is an American multinational medical devices, pharmaceutical and consumer packaged goods manufacturer founded in 1886. 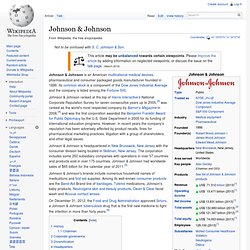 Its common stock is a component of the Dow Jones Industrial Average and the company is listed among the Fortune 500. Johnson & Johnson ranked at the top of Harris Interactive's National Corporate Reputation Survey for seven consecutive years up to 2005,[3] was ranked as the world's most respected company by Barron's Magazine in 2008,[4] and was the first corporation awarded the Benjamin Franklin Award for Public Diplomacy by the U.S. State Department in 2005 for its funding of international education programs. Johnson & Johnson. The Home Depot. The Home Depot (referred to in some countries and often in colloquial speech simply as Home Depot) is an American retailer of home improvement and construction products and services. 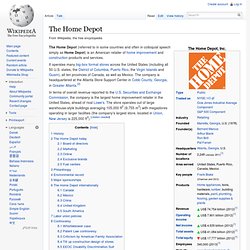 It operates many big-box format stores across the United States (including all 50 U.S. states, the District of Columbia, Puerto Rico, the Virgin Islands and Guam), all ten provinces of Canada, as well as Mexico. The Home Depot - Home. Left Article Image Left Article Header ​Corporate Responsibility Left Article Body The Home Depot is built on the principle of creating value for our stockholders while never forgetting our values. 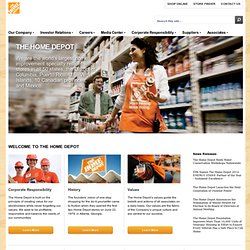 We seek to be profitable, responsible and balance the needs of our communities. Learn More. Walmart. Wal-Mart Stores, Inc., branded as Walmart /ˈwɒlmɑrt/, is an American multinational retail corporation that runs chains of large discount department stores and warehouse stores. 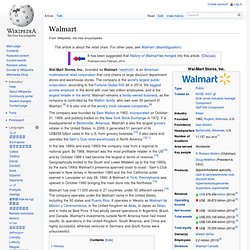 The company is the world's largest public corporation, according to the Fortune Global 500 list in 2014, the biggest private employer in the world with over two million employees, and is the largest retailer in the world. Walmart remains a family-owned business, as the company is controlled by the Walton family, who own over 50 percent of Walmart.[8] It is also one of the world's most valuable companies.[9] Walmart Corporate - We save people money so they can live better. DuPont. E. I. du Pont de Nemours and Company, commonly referred to as DuPont, is an American chemical company that was founded in July 1802 as a gunpowder mill by Eleuthère Irénée du Pont.

DuPont was the world's third largest chemical company based on market capitalization[citation needed] and ninth based on revenue in 2012.[4] Its stock price is a component of the Dow Jones Industrial Average. DuPont. The Coca-Cola Company. One of The Coca-Cola Company's headquarters buildings in Atlanta Its stock is listed on the NYSE and is part of DJIA, S&P 500 index, the Russell 1000 Index and the Russell 1000 Growth Stock Index. Its current chairman and CEO is Muhtar Kent.

Acquisitions[edit] The company has a long history of acquisitions. Coca-Cola acquired Minute Maid in 1960,[4] the Indian cola brand Thums Up in 1993,[5] and Barq's in 1995.[6] In 2001, it acquired the Odwalla brand of fruit juices, smoothies and bars for $181 million.[7][8] In 2007, it acquired Fuze Beverage from founder Lance Collins and Castanea Partners for an estimated $250 million.[9][10] The company's 2009 bid to buy a Chinese juice maker ended when China rejected its $2.4 billion bid for the Huiyuan Juice Group on the grounds that it would be a virtual monopoly.[11] Nationalism was also thought to be a reason for aborting the deal.[12] In 1982, Coca-Cola purchased Columbia Pictures for $692 million.

Revenue[edit] Www.coca-colacompany.com. Hewlett-Packard. Coordinates: Hewlett-Packard Company or HP is an American multinational information technology corporation headquartered in Palo Alto, California, United States. It provides hardware, software and services to consumers, small- and medium-sized businesses (SMBs) and large enterprises, including customers in the government, health and education sectors. The company was founded in a one-car garage in Palo Alto by William "Bill" Redington Hewlett and Dave Packard. HP is the world's leading PC manufacturer and has been since 2007, fending off a challenge by Chinese manufacturer Lenovo, according to Gartner.[2] It specializes in developing and manufacturing computing, data storage, and networking hardware, designing software and delivering services.

Major product lines include personal computing devices, enterprise and industry standard servers, related storage devices, networking products, software and a diverse range of printers and other imaging products. CORPORATE INFORMATION. Cisco Systems. Cisco Systems, Inc. is an American multinational corporation headquartered in San Jose, California, that designs, manufactures, and sells networking equipment.[3] The stock was added to the Dow Jones Industrial Average on June 8, 2009, and is also included in the S&P 500 Index, the Russell 1000 Index, NASDAQ-100 Index and the Russell 1000 Growth Stock Index.[4] History[edit] One of the many buildings on the Cisco Systems campus in San Jose 1984–1995: early years[edit] Cisco Systems was founded in December 1984 by two members of Stanford University computer support staff: Leonard Bosack who was in charge of the computer science department's computers, and Sandy Lerner, who managed the Graduate School of Business' computers.