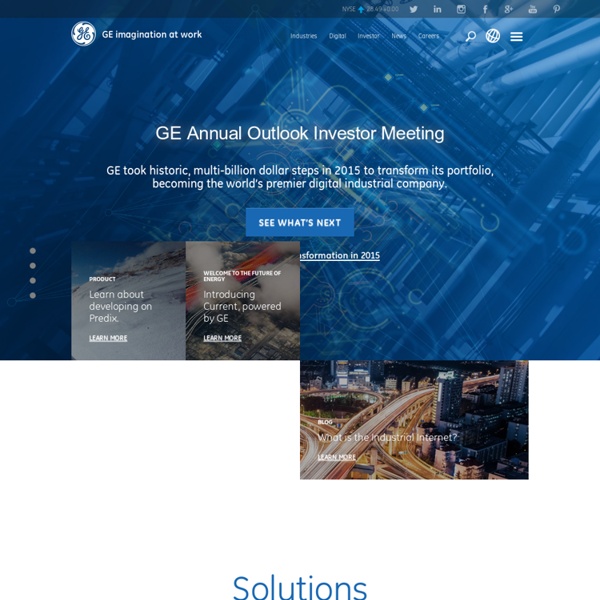 Redefining Global Cities The world’s largest metropolitan areas concentrate the drivers of global prosperity, but there isn’t one way to be a global city—this report defines seven types of global cities, providing a valuable lens through which to understand an evolving global economy. As societies and economies around the world have urbanized, they have upended the classic notion of a global city. No longer is the global economy driven by a select few major financial centers like New York, London, and Tokyo. Today, members of a vast and complex network of cities participate in international flows of goods, services, people, capital, and ideas, and thus make distinctive contributions to global growth and opportunity. And as the global economy continues to suffer from what the IMF terms “too slow growth for too long,” efforts to understand and enhance cities’ contributions to growth and prosperity become even more important.

8 tools for visualizing data with open source Data visualization is the mechanism of taking tabular or spatial data and conveying it in a human-friendly and visual way. There are several open source tools that can help you create useful, informative graphs. In this post we will take a look at eight open source, data visualization tools. Datawrapper Simple animation to explain complex principles - Electronics 1, aircraft radial engine 2, oval Regulation 3, sewing machines Playing with Data - Premier League Player Birthplaces 1.265 Billion Pounds. That’s the eye watering amount Premier League clubs were willing to spend improving their teams this summer. An insane amount of money when you consider the reality of the job role, but a sound investment in terms of business, advertising and selling shirts. Yet as the transfer window comes to a close and we say hello to record breaking transfer Paul Pogba and goodbye to England’s golden child Joe Hart, the questions have to be asked: what does all this money mean for the make up of our clubs and what does it mean for the opportunities of English players? So as a digital agency, who is certainly no stranger to data, we wanted to find out: where do our Premier League players come from, and how many are English?

Disposable Cameras There are lots of disposable camera Instructables on the site. It was hard to choose, but I've included some great ones! Need a taser, a coil gun, a flash grenade? Well then, this disposable camera guide is for you! From simple everyday parts you can make this glove which has two modes. Population Lines Print I recently produced a map entitled “Population Lines”, which shows population density by latitude. The aim was to achieve a simple and fresh perspective on these well-known data. I have labelled a few key cities for orientation purposes but I’ve left off most of the conventional cartographical adornments. I am really pleased with the end result not least because it resembles Joy Division’s iconic Unknown Pleasures album cover, which in itself is a great example of data visualisation as art.

Magenta Ain't A Colour A beam of white light is made up of all the colours in the spectrum. The range extends from red through to violet, with orange, yellow, green and blue in between. But there is one colour that is notable by its absence. You should have seen a green afterimage, but why is this significant? The afterimage always shows the colour that is complementary to the colour of the image. A Bubble Chart Showing Corporate Revenue and Profit 3 min read I remember coming across an image on reddit a month ago. It was 50 companies made into boxes and split up into different industries like Finance, Pharmaceuticals, and Retail.

Map of scientific collaboration (Redux!) Several years ago, I created a map of scientific collaborations. The attention this map obtained surpassed my wildest expectations; it got published in the scientific and popular press all around the world! I had mainly forgotten about it until I received an email that rekindled my interest in this visualization and I thought it was high time to revisit this visualization. Free mapping data will elevate flood risk knowledge For the past 17 years we have been capturing LIDAR (Light Detection & Ranging) data in England. LIDAR uses a laser to scan and map the landscape from above and is widely considered to be the best method for collecting very dense and accurate elevation data across the landscape. We use LIDAR to help the work of the Environment Agency in many ways, including creating flood models, assessing coastal change and analysing how land is used. We now have an extensive archive of aerial LIDAR data covering nearly three quarters (72%) of England – the data mainly covers flood plains, coastal zones and urban areas. As technology has improved and costs have fallen, LIDAR data is now being used by just about everybody who works with maps. From local planners to archaeologists, farmers to ecologists, LIDAR data can inform their work.

Transforming Data into Visualization Data visualization explains a story to the user; a story that if told well should help the viewer discern information and relationships between the data. Data visualization, for a designer, is the process of taking a complex structure and breaking it down in a way that the reader can easily comprehend. It is a powerful tool used to translate complex data into accessible insights. Data visualization: Science on the map Illustration by the Project Twins When linguist Lauren Gawne roams the valleys of Nepal documenting endangered Tibetan languages, she takes pains to distinguish each dialect's geographical origin. But when it came to producing maps of her results, for many years her cartographic methods were somewhat crude. “My old maps were [made] using MS Paint on top of some copyrighted map that I really shouldn't have been using,” she says. Her next solution wasn't much better: “My mum tracing a map off an atlas so that I had something a bit cleaner to work with.”