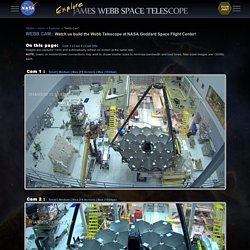 Google gives the world a peek at its secret servers. Google has given everyone a rare look inside its server rooms and detailed how keeps up with the massive growth of its search business. 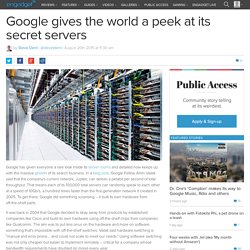 In a blog post, Google Fellow Amin Vadat said that the company's current network, Jupiter, can deliver a petabit per second of total throughput. That means each of its 100,000 total servers can randomly speak to each other at a speed of 10Gb/s, a hundred times faster than the first-generation network it created in 2005. Microsoft vacates moral high ground for the data slurpers' cesspit. Opinion A funny thing happened while I was reinstalling Windows 8 over Windows 10 yesterday morning. 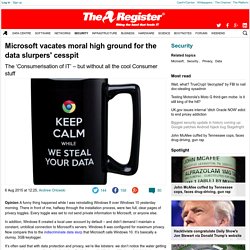 There in front of me, halfway through the installation process, were two full, clear pages of privacy toggles. Every toggle was set to not send private information to Microsoft, or anyone else. In addition, Windows 8 created a local user account by default – and didn’t demand I maintain a constant, umbilical connection to Microsoft’s servers. Windows 8 was configured for maximum privacy. Now compare this to the indiscriminate data slurp that Microsoft calls Windows 10. Ethereum Frontier. 'terminator genisys' di alan taylor. non è un capolavoro ma e' divertente. Marco Giusti per Dagospia. 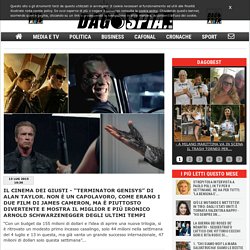 Uk.businessinsider. Facebook map of where you have been. Mobile First, But What’s Next? Editor’s note: Peter Wagner and Martin Giles are partners at Wing Venture Capital. 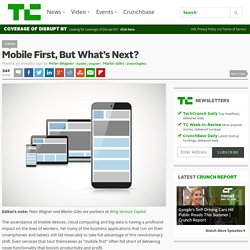 The ascendance of mobile devices, cloud computing and big data is having a profound impact on the lives of workers. Yet many of the business applications that run on their smartphones and tablets still fail miserably to take full advantage of this revolutionary shift. Even services that tout themselves as “mobile first” often fall short of delivering novel functionality that boosts productivity and profit.

The offerings that will come to dominate the emerging $100 billion market for enterprise applications will be those that are “authentically mobile,” a term we use to describe services that would be extremely difficult or impossible to achieve without taking full advantage of the unique properties of the mobile ecosystem. Truly authentic mobile business applications are still pretty rare. Uk.businessinsider. The first solar bike path is producing more energy than expected. Uk.businessinsider. EU Digital Single Market plan: We will compromise fast, and compromise early. 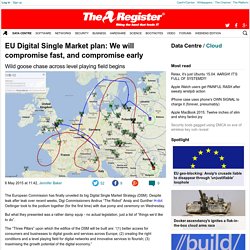 Watch Elon Musk announce Tesla Energy in the best tech keynote I've ever seen. I've watched a lot of handsomely paid CEOs get on stages for keynote presentations over the past decade, and none were as good as the one I saw Elon Musk give Thursday night in California as he introduced Tesla's new battery system. 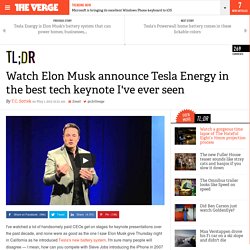 I'm sure many people will disagree — I mean, how can you compete with Steve Jobs introducing the iPhone in 2007 — but ultimately Jobs was selling a better smartphone. Musk is selling a better future. I'm not saying Musk is going to succeed, or that you should go buy Tesla's battery. Your own personal Azure: Microsoft’s new Azure Stack for private clouds. Today at Microsoft's Ignite conference in Chicago, the company's executives will make a set of major announcements about the company's server, management, and cloud offerings. 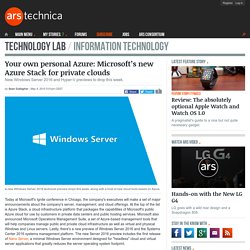 At the top of the list is Azure Stack, a cloud infrastructure platform that packages the capabilities of Microsoft's public Azure cloud for use by customers in private data centers and public hosting services. Microsoft also announced Microsoft Operations Management Suite, a set of Azure-based management tools that will help companies manage public and private cloud infrastructure as well as virtual and physical Windows and Linux servers.

Lastly, there's a new preview of Windows Server 2016 and the Systems Center 2016 systems management platform. The new Server 2016 preview includes the first release of Nano Server, a minimal Windows Server environment designed for "headless" cloud and virtual server applications that greatly reduces the server operating system footprint. CNET News - Hololens: The latest mind-blowing demos​ Fun with ML, Stream Analytics and PowerBI – Observing Virality in Real Time - Machine Learning. Uk.businessinsider. uBeam’s Ultrasound Wireless Charging Is Real, And About To Be Really Funded. Uk.businessinsider. I designed the new version of Office for Windows Phone, AMA : windowsphone. The Internet of things is great until it blows up your house. Is hyperconvergence a good thing? Ask a mini computer veteran.

Hyper-converged systems integrate compute, storage and networking into a single purchasable entity that is easier to deploy, operate and manage than traditional best-of-breed component systems. 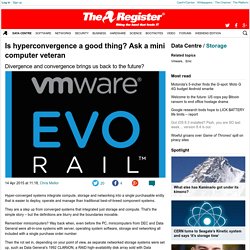 Pin-pointing China's attack against GitHub. For the past week, the website "GitHub" has been under attack by China. 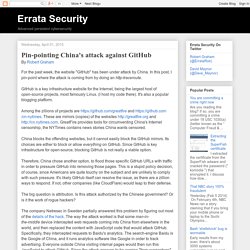 In this post, I pin-point where the attack is coming from by doing an http-traceroute. GitHub is a key infrastructure website for the Internet, being the largest host of open-source projects, most famously Linux. (I host my code there). It's also a popular blogging platform. Among the zillions of projects are and These are mirrors (copies) of the websites and GreatFire provides tools for circumventing China's Internet censorship, the NYTimes contains news stories China wants censored. China blocks the offending websites, but it cannot easily block the GitHub mirrors.

Pin-pointing China's attack against GitHub. For the past week, the website "GitHub" has been under attack by China. In this post, I pin-point where the attack is coming from by doing an http-traceroute. GitHub is a key infrastructure website for the Internet, being the largest host of open-source projects, most famously Linux. Australia finds $1 BEELLION to replace No-SQL DATABASE. That sound? The first drops of a cool billion Australian dollars (US$770m, £520m) that the nation's government has started pouring into a honeypot for the world's technology community.

The sweet, sweet pot of dosh is there because Australia has decided it can't go on running System 204, an eighties database, to run its welfare payments agency Centrelink. The agency sends 180,000 letters and emails, and dispenses $290m, every day. Citrix Online. VMware CEO Pat Gelsinger's DARKEST FEARS revealed. 4 reasons to outsource your DNS The USA's Securities and Exchange Commission (SEC) has published VMware's Form 10-K, the warts-and-all document listed companies are required to file each year offering deep detail on the state of their business.

Form 10-Ks are rather less polished than annual reports and therefore offer more penetrating insights into a company's performance. So what did VMware put in it's 10-K? Rthe The most interesting bits are in the “Risk factors” section which kicks off by stating “As the market for our computer virtualization products has matured, we have been increasingly developing and marketing products and services targeted toward the delivery, management and automation of information technology (“IT”) infrastructure, platforms and services through cloud-based solutions.

If businesses do not find our cloud computing solutions compelling, our revenue growth and operating margins may decline.” And those new products bring new risks. 9 lessons about the web and business from Pearltrees, the or. La battaglia sulle batterie che decideranno il futuro delle auto elettriche - Steve LeVine. The Future Of The Blockchain. iPads. IKEA will start selling wireless charging lamps and tables. After lots of perseverance from smartphone makers, wireless charging is finally starting to make an impact. Dreaming of an Apple Car and the inevitable future of 'driving' Uk.businessinsider. Sinclair ZX Spectrum Vega. Bluetooth ZX Spectrum: Recreating the Sinclair ZX Spectrum by Elite Systems Ltd.