Mary Oliver on a Life Well Lived and How to Be Fully Alive. Mary Oliver on What Attention Really Means and Her Moving Eulogy to Her Soul Mate. By Maria Popova “Attention without feeling … is only a report.” 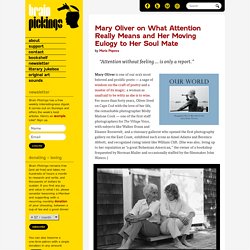 Mary Oliver is one of our era’s most beloved and prolific poets — a sage of wisdom on the craft of poetry and a master of its magic; a woman as unafraid to be witty as she is to wise. For more than forty years, Oliver lived on Cape Cod with the love of her life, the remarkable photographer Molly Malone Cook — one of the first staff photographers for The Village Voice, with subjects like Walker Evans and Eleanor Roosevelt, and a visionary gallerist who opened the first photography gallery on the East Coast, exhibited such icons as Ansel Adams and Berenice Abbott, and recognized rising talent like William Clift.

(She was also, living up to her reputation as “a great Bohemian American,” the owner of a bookshop frequented by Norman Mailer and occasionally staffed by the filmmaker John Waters.) Mary Oliver (b. 1935, right) with Molly Malone Cook (1925–2005) at the couple's home in Provincetown, Massachusetts. Joan Didion on Keeping a Notebook. By Maria Popova “We are well advised to keep on nodding terms with the people we used to be, whether we find them attractive company or not.” 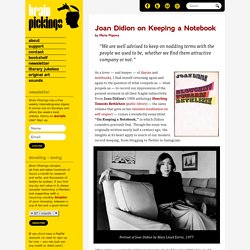 As a lover — and keeper — of diaries and notebooks, I find myself returning again and again to the question of what compels us — what propels us — to record our impressions of the present moment in all their fragile subjectivity. From Joan Didion’s 1968 anthology Slouching Towards Bethlehem (public library) — the same volume that gave us her timeless meditation on self-respect — comes a wonderful essay titled “On Keeping a Notebook,” in which Didion considers precisely that. Though the essay was originally written nearly half a century ago, the insights at its heart apply to much of our modern record-keeping, from blogging to Twitter to Instagram. Deborah Harkness reflects on her All Souls Trilogy. Deborah Harkness, author of the All Souls Trilogy, shares her journey from the beginning of A Discovery of Witches to the trilogy in a boxed set. 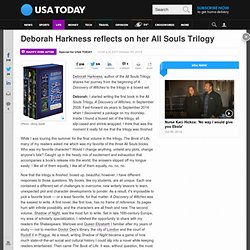 Deborah: I started writing the first book in the All Souls Trilogy, A Discovery of Witches, in September 2008. Fast-forward six years to September 2014 when I discovered a package on my doorstep. Inside I found a boxed set of the trilogy, all slip-cased and shrink-wrapped. I think that was the moment it really hit me that the trilogy was finished. Thirty-Three-Hit Wonder: Billy Joel Interviewed For The New Yorker. Interview: Neil Patrick Harris, Author Of 'Choose Your Own Autobiography' Neil Patrick Harris has hosted the Tony Awards four times. 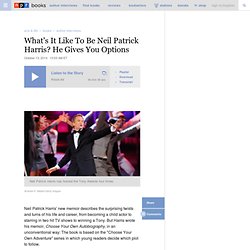 Andrew H. Walker/Getty Images hide caption itoggle caption Andrew H. Walker/Getty Images Neil Patrick Harris has hosted the Tony Awards four times. Andrew H. Neil Patrick Harris' new memoir describes the surprising twists and turns of his life and career, from becoming a child actor to starring in two hit TV shows to winning a Tony. "I've sat here and talked ... about all the weird, different things that I've gotten to do in my life," he tells Fresh Air's Terry Gross, "and I thought, rather than have a book that tries to find a common thread between all of these events, [the book] essentially allows you to be me and choose your own version of my autobiography. " Harris, 41, grew up in New Mexico, where he fell in love with magic and acting. Harris came out publicly in 2006, and recently married his longtime partner, David Burtka. Tara Brach & True Refuge: Her Story, Her Truths. ~ Edith Lazenby. I drove 40 odd minutes to Great Falls, Virginia, one afternoon, to interview Tara Brach.

The roads were windy, and she was one of the last houses mid all the trees. Her dog greeted me. The same dog I had heard her talk about in her podcasts that I listen to almost daily. It is odd to “know“ a person virtually and yet we had never met. I know she takes a walk every day. What I did not know is the kind heart I hear on my computer that speaks with compassion and wisdom is no different than the person I met. A Libertarian House on the Prairie - The New Yorker. Shortly after John McCain chose Sarah Palin as his running mate, four years ago, a journalist asked her sister Heather Bruce what books Sarah had read as a child. 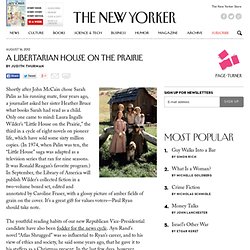 Only one came to mind: Laura Ingalls Wilder’s “Little House on the Prairie,” the third in a cycle of eight novels on pioneer life, which have sold some sixty million copies. (In 1974, when Palin was ten, the “Little House” saga was adapted as a television series that ran for nine seasons. It was Ronald Reagan’s favorite program.) In September, the Library of America will publish Wilder’s collected fiction in a two-volume boxed set, edited and annotated by Caroline Fraser, with a glossy picture of amber fields of grain on the cover.

It’s a great gift for values voters—Paul Ryan should take note. The youthful reading habits of our new Republican Vice-Presidential candidate have also been fodder for the news cycle. Andrew Asks Anything: Matthew Vines. Rising Woofiness of Women – Caroline hosts Elizabeth Gilbert etc. — Coyote Network News. Weekly Wisdom. Deborah Harkness by Beaks and Geeks. Dani Shapiro on Vulnerability, the Creative Impulse, the Writing Life, and How to Live with Presence. By Maria Popova “The job — as well as the plight, and the unexpected joy — of the artist is to embrace uncertainty, to be sharpened and honed by it. 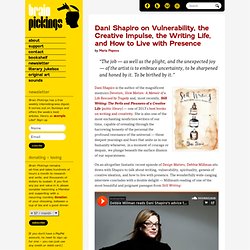