Firing Line with William F. Buckley Jr.: Borges: South America's Titan. A New Refutation of Time: Borges on the Most Paradoxical Dimension of Existence. “If our heart were large enough to love life in all its detail, we would see that every instant is at once a giver and a plunderer,” the French philosopher Gaston Bachelard wrote in contemplating our paradoxical experience of time in the early 1930s. 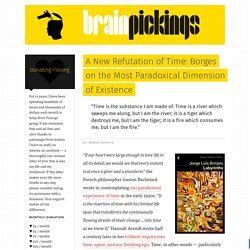 “It is the insertion of man with his limited life span that transforms the continuously flowing stream of sheer change … into time as we know it,” Hannah Arendt wrote half a century later in her brilliant inquiry into time, space, and our thinking ego. Time, in other words — particularly our experience of it as a continuity of successive moments — is a cognitive illusion rather than an inherent feature of the universe, a construction of human consciousness and perhaps the very hallmark of human consciousness. Profile of a Writer: Jorge Luis Borges. Borges’s funes the memorious. By Richard Marshall. 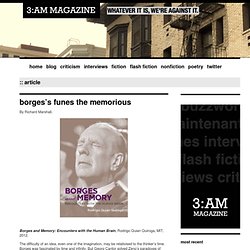 Borges and Memory: Encounters with the Human Brain, Rodrigo Quian Quiroga, MIT, 2012. The difficulty of an idea, even one of the imagination, may be relativised to the thinker’s time. Borges was fascinated by time and infinity. But Georg Cantor solved Zeno’s paradoxes of infinity before most of Borges work had even been started. Bizarre metaphysical notions about the impossibility of time and paradoxes therein, as set out by McTaggart et al, were being swept away too. What comes after literature and metaphysics have gone? In Dante he inaugurates a serene labyrinth of various and felicitous traits. A writer is in hell when her reader forgets her. Intolerable precision and detail destroys us. In Milton, instructively, is a book of an awesome, miraculously sublime silence, that of Hell and Satan. What can express the truth but the living complexity of the actual?

Nietzsche wrote: Elsewhere Borges calls Funes a metaphor for insomnia. Borges read and remembered. What Did Jorge Luis Borges Jorge See in Xul Solar? Xul Solar, “B.A.” (1929), gouache and watercolor on paper, 11.8 x 17.7 in (private collection) (all images courtesy the Americas Society) The writer Jorge Luis Borges once referred to his friend the artist Xul Solar as “one of the most singular events of our era” (from “Xul Solar and His Art,” translated by Christopher Leland Winks, in Xul Solar and Jorge Luis Borges: The Art of Friendship). 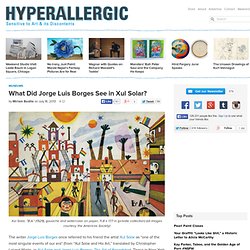 Those in New York have the opportunity to see an important selection of works by the two friends in an exhibition at the Americas Society. Curated by Gabriela Rangel, the show sheds new light on the work of Borges and, through the lens of friendship, reveals the multifaceted artistic and intellectual project that he and Solar shared. As the quote above demonstrates, Borges regarded the artist as not only a collaborator and interlocutor, but also as a model and inspiration. It alludes as well to the range of Solar’s production. Photograph of J.L. Las postales de Borges Inéditos inesperados - 27.09.2013 - lanacion.com. Cuando parecía que todos los cajones habían sido hurgados, que era imposible encontrar un texto desconocido, una anécdota ignorada de Jorge Luis Borges, sucede lo imprevisto. 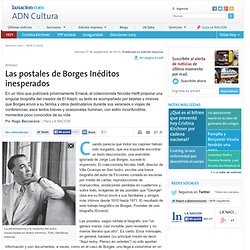 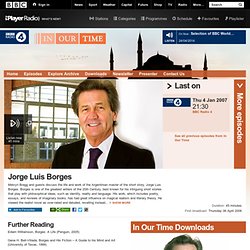 Borges is one of the greatest writers of the 20th Century, best known for his intriguing short stories that play with philosophical ideas, such as identity, reality and language. His work, which includes poetry, essays, and reviews of imaginary books, has had great influence on magical realism and literary theory.

He viewed the realist novel as over-rated and deluded, revelling instead in fable and imaginary worlds. He declared "people think life is the thing but I prefer reading". Translation formed an important part of his work, writing a Spanish language version of an Oscar Wilde story when aged around 9. He lived most of his life in obscurity, finding recognition only in his sixties when he was awarded the International Publishers' Prize which he shared with Samuel Beckett.

So how has Borges' work informed ideas about our experience of the world through language?