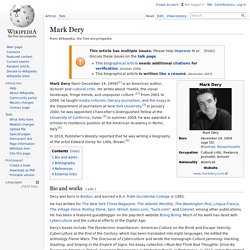 He writes about "media, the visual landscape, fringe trends, and unpopular culture. "[2] From 2001 to 2009, he taught media criticism, literary journalism, and the essay in the Department of Journalism at New York University.[3] In January 2000, he was appointed Chancellor's Distinguished Fellow at the University of California, Irvine.[4] In summer 2009, he was awarded a scholar-in-residence position at the American Academy in Rome, Italy.[5] In 2010, Publisher's Weekly reported that he was writing a biography of the artist Edward Gorey for Little, Brown.[6] Bio and works[edit] Dery was born in Boston, and earned a B.A. from Occidental College in 1982. Dery’s books include The Pyrotechnic Insanitarium: American Culture on the Brink and Escape Velocity: Cyberculture at the End of the Century, which has been translated into eight languages. Criticism of libertarianism. 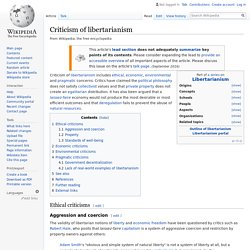 Critics have claimed the political philosophy does not satisfy collectivist values and that private property does not create an egalitarian distribution. It has also been argued that a laissez-faire economy would not produce the most desirable or most efficient outcomes and that deregulation fails to prevent the abuse of natural resources. Ethical criticisms[edit] Aggression and coercion[edit] The validity of libertarian notions of liberty and economic freedom have been questioned by critics such as Robert Hale, who posits that laissez-faire capitalism is a system of aggressive coercion and restriction by property owners against others: Other critics, including John Rawls in Justice as Fairness, argue that implied social contracts justify government actions that violate the rights of some individuals as they are beneficial for society overall.

Why I left libertarianism: An ethical critique of a limited ideology. I considered myself a libertarian for at least 10 years. 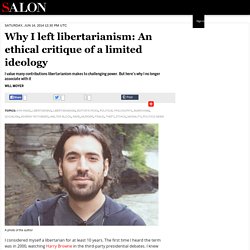 The first time I heard the term was in 2000, watching Harry Browne in the third-party presidential debates. I knew next to nothing of libertarian philosophy, but the little I did understand, I identified with. My high school held a mock presidential election and I hung up “vote for Harry Browne” posters and encouraged my friends to write him in on their ballots. It was the first and last time I would participate in any kind of political campaign. When I turned 18, I registered to vote with the Libertarian Party, despite my parents’ warning that I would lose the chance to influence primary elections. I never voted for a Libertarian presidential candidate. I moved further and further toward what I considered true libertarianism, eschewing the capital “L” and politics in general. 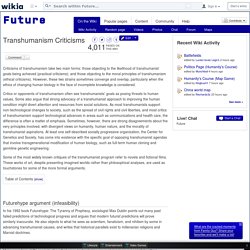 However, these two strains sometimes converge and overlap, particularly when the ethics of changing human biology in the face of incomplete knowledge is considered. Critics or opponents of transhumanism often see transhumanists' goals as posing threats to human values. Some also argue that strong advocacy of a transhumanist approach to improving the human condition might divert attention and resources from social solutions. As most transhumanists support non-technological changes to society, such as the spread of civil rights and civil liberties, and most critics of transhumanism support technological advances in areas such as communications and health care, the difference is often a matter of emphasis. Futurehype argument (infeasibility) See Also. James Hughes (sociologist) Hughes holds a doctorate in sociology from the University of Chicago, where he served as the assistant director of research for the MacLean Center for Clinical Medical Ethics.[3] Before graduate school he was temporarily ordained as a Buddhist monk in 1984 while working as a volunteer in Sri Lanka for the development organization Sarvodaya from 1983 to 1985. 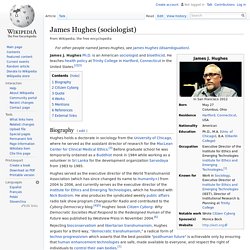 Hughes served as the executive director of the World Transhumanist Association (which has since changed its name to Humanity+) from 2004 to 2006, and currently serves as the executive director of the Institute for Ethics and Emerging Technologies, which he founded with Nick Bostrom. He also produces the syndicated weekly public affairs radio talk show program Changesurfer Radio and contributed to the Cyborg Democracy blog.[4][5] Hughes' book Citizen Cyborg: Why Democratic Societies Must Respond to the Redesigned Human of the Future was published by Westview Press in November 2004.[6] Paulina Borsook. Biography[edit] Paulina Borsook was born in Pasadena, California. 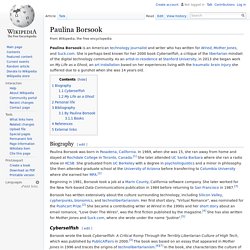 In 1969, when she was 15, she ran away from home and stayed at Rochdale College in Toronto, Canada.[1] She later attended UC Santa Barbara where she ran a radio show on KCSB. She graduated from UC Berkeley with a degree in psycholinguistics and a minor in philosophy. She then attended graduate school at the University of Arizona before transferring to Columbia University where she earned her MFA.[2] Richard Barbrook. Richard Barbrook delvering a lecture at Pro Arte, St Petersburg, November 2008 Richard Barbrook is an academic in the School of Social Sciences, Humanities and Languages at the University of Westminster. 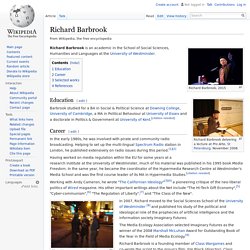