Netflix lands 'Knives Out' sequels in high-priced deal. NEW YORK — Detective Benoit Blanc's next cases will be for Netflix. 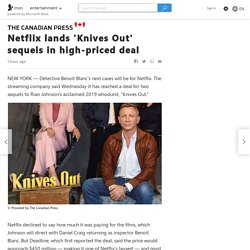 The streaming company said Wednesday it has reached a deal for two sequels to Rian Johnson's acclaimed 2019 whodunit, “Knives Out.” © Provided by The Canadian Press Netflix declined to say how much it was paying for the films, which Johnson will direct with Daniel Craig returning as inspector Benoit Blanc. But Deadline, which first reported the deal, said the price would approach $450 million — making it one of Netflix's largest — and most sweater-clad — acquisitions. Gallery: 25 movies that were originally TV shows (Espresso) It also lands Netflix something it has dearly sought: the kind of major film franchises that traditional studios have long depended on. Netflix outbid several other streaming services to land “Knives Out,” something that was even possible because the 2019 film was produced by Media Rights Cable and distributed by Lionsgate on a single-picture deal.

The Associated Press Continue reading Continue reading. In The Courier, Benedict Cumberbatch delivers Soviet secrets during the Cold War. Reviews and recommendations are unbiased and products are independently selected. 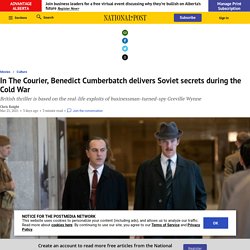 Postmedia may earn an affiliate commission from purchases made through links on this page. Article content. A Nazi school hides in plain sight in Six Minutes to Midnight. Reviews and recommendations are unbiased and products are independently selected. 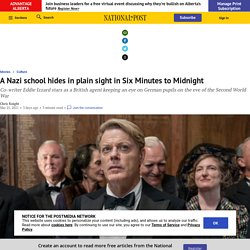 Postmedia may earn an affiliate commission from purchases made through links on this page. Article content Pre-war Britain was a very different world when it came to spycraft. Best whodunit mysteries to stream. By Jessica Wedemeyer 2:20pm PST, Feb 6, 2021 "Knives Out" on YouTube, Vudu & Amazon Prime Video Who doesn't love a good murder mystery?! 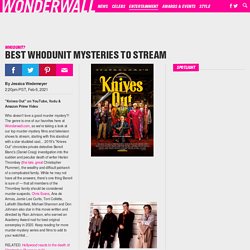 The genre is one of our favorites here at Wonderwall.com, so we're taking a look at our top murder-mystery films and television shows to stream, starting with this standout with a star-studded cast… 2019's "Knives Out" chronicles private detective Benoit Blanc's (Daniel Craig) investigation into the sudden and peculiar death of writer Harlan Thrombey (the late, great Christopher Plummer), the wealthy and difficult patriarch of a complicated family. While he may not have all the answers, there's one thing Benoit is sure of — that all members of the Thrombey family should be considered murder suspects. Chris Evans, Ana de Armas, Jamie Lee Curtis, Toni Collette, LaKeith Stanfield, Michael Shannon and Don Johnson also star in this movie written and directed by Rian Johnson, who earned an Academy Award nod for best original screenplay in 2020. 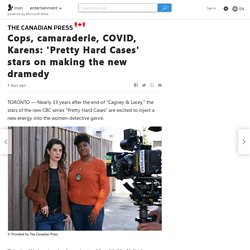 Moore of "Orange is the New Black" as polar police opposites who form a connection and work together despite being detectives of rival departments in Toronto. "Oftentimes there's this idea that if there are two women, that they're in competition with each other, and I like to think our show doesn't pit these women in competition," Moore said in a recent interview. 20 great Canadian movies you probably haven’t seen—but should. You're an All Creatures Great and Small Insider! We’ve received your request, you’ve been added to our email list. 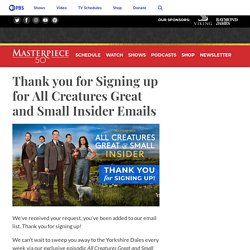 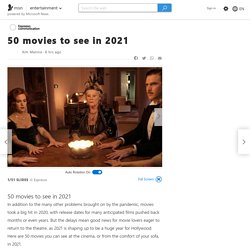 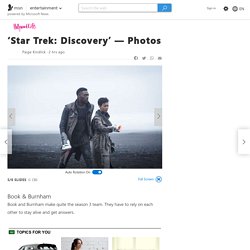 HL spoke EXCLUSIVELY with David Ajala about Book’s connection with Burnham, Book’s backstory, and Book’s love for Grudge. Cleveland “Book” Booker is the exciting new addition in Star Trek: Discovery season 3. David Ajala stars as the new character Burnham meets when she ends up in the future. While they didn’t start off in the best way, Book and Burnham eventually came to an understanding and have vowed to work together to find Burnham’s and crewmates. But does Book trust Burnham and does Burnham trust Book? “I think for Cleveland Booker it’s not so much the case of who he trusts and who he doesn’t, I think he’s just a one-man team, a one-man band, that operates very effectively by himself,” David told HollywoodLife EXCLUSIVELY. DIY - Bleach Dye Tutorial - Slice. Best Movie Sex Scenes Nudity, Sexiest Hollywood Films. The 50 most popular movies in history. The 50 most popular movies Microsoft may earn an Affiliate Commission if you purchase something through recommended links in this article Number 1: The Shawshank Redemption 1994) The Dark Knight (2008) Inception (2010) Fight Club (1999) Pulp Fiction (1994) Forrest Gump (1994) 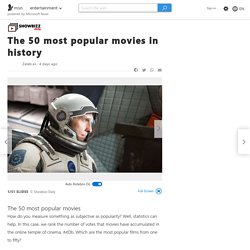 Untitled. Untitled. The United States celebrated the end of World War II with Victory in Japan Day on Aug. 14, 1945, exactly 75 years before the release of “Apocalypse ’45,” Erik Nelson’s examination of the war in the Pacific in the words and film footage of the men who were there. 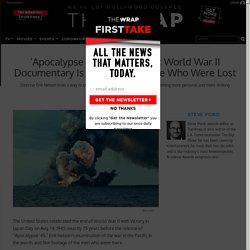 But as that foreboding title suggests, you wouldn’t use a word like “celebrated” to refer to “Apocalypse ’45.” The documentary is a tribute to the men who fought, but it’s also an elegy for those who were lost, and it doesn’t evade questions about the reverberations that linger from the use of the two atomic bombs that helped end the war. In some ways, it is a film about victory, illustrated with vivid, restored footage that was shot during the war but has largely sat unseen in the National Archives since then. But more than that, it is a film about loss and sacrifice, which you hear in the voices of the two dozen former soldiers, ranging in age from their early 90s to 101, who tell the story. Untitled. (Spoilers ahead for the season 1 finale of “Perry Mason” on HBO) The first season of HBO’s reboot of “Perry Mason” is now in the bag, but we’re not done with these characters just yet as the network already announced a second season renewal a few weeks back.

And as the season ended, Perry Mason’s crew was finally, officially assembled with Perry (Matthew Rhys), Della Street (Juliet Rylance) and Paul Drake (Chris Chalk) together in their office, ready to get to work. For Paul Drake in particular, season 1 of “Perry Mason” was a fraught journey. Untitled. By Neia Balao 4:43am PDT, Aug 6, 2020 The options are almost endless! As we continue to spend a good amount of time cozied up on our couches and glued to our rotation of streaming services, it can feel like we've seen just about everything worth watching. Untitled. © Provided by The Canadian Press LOS ANGELES — A brand new life is ahead for the vintage sitcom "Who's the Boss?”

And its devoted fans. Untitled. Untitled. By Cara Sprunk 4:15am PDT, Jul 28, 2020 There's nothing more exciting than a spy show and these days, there are plenty to choose from while you're homebound. To celebrate the most thrilling shows on television — a contrast from our non-exciting lives — Wonderwall.com has compiled a list of the best spy shows you can watch and stream. Let's start with "Marvel's Agents of S.H.I.E.L.D. ," the ABC superhero spy show that premiered in 2013 and is wrapping up in August 2020 after seven seasons on the air. The series follows S.H.I.E.L.D., the Strategic Homeland Intervention, Enforcement and Logistics Division. Clark Gregg, who appeared in several of the Marvel Cinematic Universe films, plays Phil Coulson, a special agent who climbs the ranks of the organization throughout the series, handling cases and protecting the agency from the terrorist group Hydra.

What started with just a handful of television channels turned into hundreds of television channels and thousands of shows covering a multitude of fields, cultures, and other aspects of society. And with streaming platforms like Netflix and Hulu alongside internet platforms like Facebook and YouTube, viewing audiences have never been wired in more to television. Untitled. Since the silent era of film, spy films have been offering up a certain kind of escapism for movie-going audiences. Untitled. Untitled. The 19 best romantic movies on Netflix you'll actually want to watch. If you need some passion in your life, there's nothing like a romantic movie to get you there.Here are the best romantic movies on Netflix right now.The 19 titles we recommend include classics like "Jerry Maguire," "Silver Linings Playbook," and "Hitch.