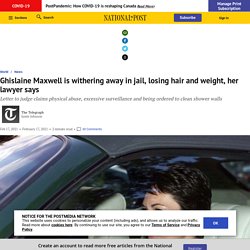 The 59-year-old former partner of billionaire and pedophile Jeffrey Epstein is awaiting trial on sex trafficking charges, but her lawyers are asking for her to be released on bail citing intolerable conditions at the Metropolitan Detention Centre in Brooklyn. “Recently, out of view of the security camera, Ms. Maxwell was placed in her isolation cell and physically abused during a pat-down search,” wrote Bobbi Sternheim. “When Ms. A week later she was “ordered” into a shower “to clean, sanitize and scrub the walls with a broom”, the lawyer added. “She is withering to a shell of her former self: losing weight, losing hair and losing her ability to concentrate,” Sternheim wrote in the letter addressed to Alison Nathan, a New York judge. 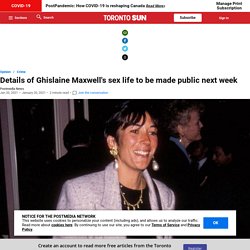 But don’t expect all the lurid details. The most salacious specifics discussed by Maxwell, Jeffrey Epstein’s alleged pimp, in her July 2016 deposition will be redacted by order of Judge Loretta Preska, according to the U.K.’s Daily Mail. The same goes for anything in the documents considered to about “consensual adult behaviour” and remain private, the report says. “Public access to certain parts of the transcript is outweighed by Ms. “Although the prurient interest of some may be left unsatiated as a result, Ms. We apologize, but this video has failed to load. The hearing was briefly disrupted by QAnon conspiracy theorists, who were live-streaming the audio feed on YouTube.

Maxwell, 58, has been behind bars since being arrested for allegedly getting teenage girls, some as young as 14, for Epstein to abuse sexually. Transcripts from Ghislaine Maxwell’s case too ‘sensational and impure’ for the public, judge says. Article content A federal judge in New York has granted requests to redact segments from Ghislaine Maxwell case filed last month, ruling some of the details were too “sensational and impure” to reveal. 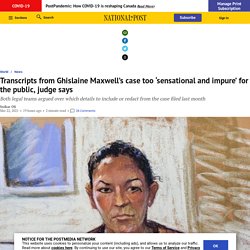 The decision comes as federal prosecutors and Maxwell’s defence team argue about which of the evidence submitted under seal to keep out of the public eye. U.S. District Judge Alison J. Nathan on Thursday adhered to most of the redactions filed by the U.S. government on its case and added several redactions of transcript interviews at Maxwell’s request. Citing privacy interests, Nathan ruled the disclosure of certain portions of the transcript “would merely serve to cater to a ‘craving for that which is sensational and impure.’” The decision also favours most of the Department of Justice’s requests to keep the redactions they argue safeguards the ongoing criminal investigation into Maxwell and maintain the privacy of third parties. Her trial is currently scheduled for July. Ghislaine Maxwell jail conditions 'degrading,' says brother. LONDON — The brother of Jeffrey Epstein’s former girlfriend Ghislaine Maxwell said Wednesday she should be released on bail from a U.S. jail, and claimed that she was being held in “degrading” conditions that amount to torture. © Provided by The Canadian Press Maxwell, 59, is awaiting trial in July on charges she recruited teenage girls for the late financier to sexually abuse. 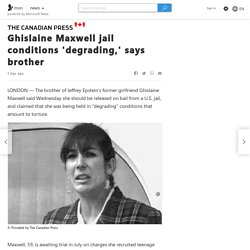 The British socialite has been in a federal lockup in Brooklyn since she was arrested last July, and she has lost two bail requests — including a $28.5 million bail release proposal in December — because she was deemed a flight risk. Prosecutors oppose Ghislaine Maxwell's 3rd quest for bail. NEW YORK — Prosecutors urged a judge to reject a third quest for bail by a British socialite charged with soliciting teenage girls in the 1990s for financier Jeffrey Epstein to sexually abuse. © Provided by The Canadian Press There are multiple reasons to deny Ghislaine Maxwell’s effort at freedom before her July trial, prosecutors said in a Tuesday filing in Manhattan federal court. 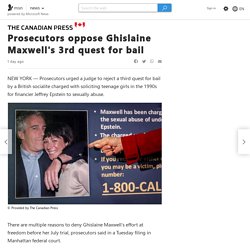 Load Error Last month, the 59-year-old Maxwell argued through her lawyers that bail should be granted because she is willing to renounce her citizenship in England and France. Jeffrey Epstein's New York mansion sells for US$50 million. Article content After just seven months on the market, the controllers of Epstein’s estate have sold the infamous townhouse at 9 E. 71st St. in Manhattan for US$51 million — a massive cut from its original list price of US$88 million. 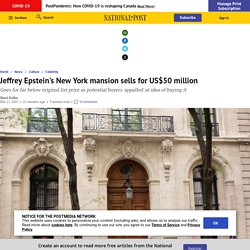 That’s a fast sale in the world of high-priced New York real estate. The New York Post reported that the buyer works in finance and is not from the U.S. Why such a deep discount? Maybe it was originally overvalued by prosecutors, who had hoped the infamy might help sell it at a good high price to be able to compensate the victims well. Some Big Apple brokers told the New York Post that their clients had been appalled at the thought of buying the Epstein house. AOL is now a part of Verizon Media. AOL is part of Verizon Media. 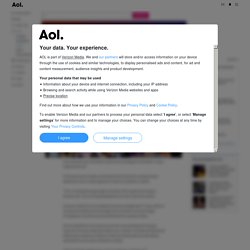 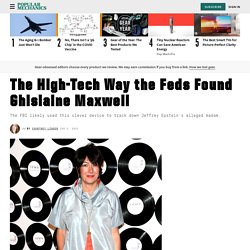 The FBI used "stingray" equipment to locate Maxwell through her smartphone's GPS data, the Daily Beast first reported on Monday.Stingray devices act like cell phone towers to capture a device's exact location. Faraday cages are the only sure-fire way to circumvent them. On July 2, 2020, the U.S. Judge rejects Epstein associate Ghislaine Maxwell's bail bid. NEW YORK — A judge rejected a $28.5 million proposed bail package for Jeffrey Epstein’s former girlfriend Monday, saying her incarceration is necessary to ensure she faces trial on charges she recruited teenage girls for the late financier to sexually abuse. © Provided by The Canadian Press U.S. 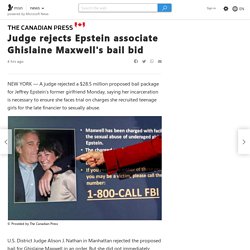 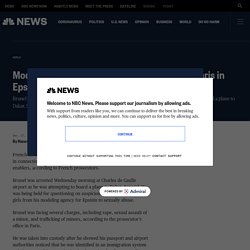 Brunel was arrested Wednesday morning at Charles de Gaulle airport as he was attempting to board a plane to Dakar, Senegal. He was being held for questioning on suspicion of providing underage girls from his modeling agency for Epstein to sexually abuse. Brunel was facing several charges, including rape, sexual assault of a minor, and trafficking of minors, according to the prosecutor’s office in Paris. He was taken into custody after he showed his passport and airport authorities noticed that he was identified in an immigration system as being wanted for questioning by the national police, according to a French police source. An attorney for Brunel did not immediately respond to a request for comment.

Justice Dept.: 'Poor judgment' used in Epstein plea deal. WASHINGTON — A Justice Department report has found former Labor Secretary Alex Acosta exercised “poor judgment” in handling an investigation into wealthy financier Jeffrey Epstein when he was a top federal prosecutor in Florida. © Provided by The Canadian Press The report, obtained by The Associated Press, is a culmination of an investigation by the Justice Department’s Office of Professional Responsibility over Acosta’s handling of a secret plea deal with Epstein, who had been accused of sexually abusing dozens of underage girls. Developer to demolish Jeffrey Epstein's $22M Florida mansion, says locals will be 'happy it's gone' Jeffrey Epstein’s notorious mansion in Palm Beach, Florida, which is reported to have been at the centre of many of his crimes, is set to face the wrecking ball.

The Wall Street Journal has reported that the 14,000-square-foot, six-bedroom pad, complete with huge swimming pool and sea views, was put on the For Sale list in July for an eye-watering $22 million. “Palm Beach is going to be very happy that it’s gone,” Todd Michael Glaser, the developer who bought the mansion, told the Wall Street Journal. The home features heavily in Filthy Rich, Netflix’s docu-series examining Epstein’s life and crimes. In total, Epstein owned six properties, including a New York City apartment. Prince Andrew Spotted In Public For First Time Since Latest Epstein Revelations. By Jamie Samhan. 25 Oct 2020 3:26 PM Around a year after his trainwreck interview with Emily Maitlis on BBC’s “Newsnight”, Prince Andrew is looking to return to public duties.

According to the Sunday Times, the Duke of York wants to “serve his country” and claims he has “the Queen and the Royal Family’s backing.” Prince Andrew first stepped down from being a working royal “for the foreseeable future” in the fallout from his friendship with convicted pedophile Jeffrey Epstein. Andrew attempted to clear his name in an interview with Maitlis, addressing his friendship with Epstein and allegations he had sex three times with Virginia Giuffre, who was a minor at the time. While Andrew has denied Giuffre’s claims, the interview only raised more questions. Ghislaine Maxwell's deposition reveals Prince Andrew asked her about his accuser.

Giuffre has spoken out publicly and described herself as a sex-trafficking victim, alleging she was forced to have sex with Prince Andrew three times while she was 17 years old. The second son of Queen Elizabeth has not been charged with any wrongdoing. In the deposition, Maxwell said that the day after she released a statement denying Giuffre’s accusations, she sent an email to someone indicating that they should give her a call. Their name was redacted, but according to The Guardian, “the subject matter – Giuffre – and timing strongly suggest that it went to Prince Andrew.”

PRINCE Andrew is accused of attended a topless photo shoot with a teen sex trafficking victim and seven or eight Russian women at Jeffrey Epstein’s Virgin Islands hideaway, in a bombshell new book. The Duke of York was also faces allegations that he was given oral sex by accuser Virginia Giuffre in front of a six foot lesbian oil painting of the then-teen and under the watch of Ghislaine Maxwell, the book claims. The new allegations are made in The Spider - an in-depth investigation into Epstein, Maxwell and those caught up in their " web" by Barry Levine, published tomorrow.

Untitled. Last summer, federal prosecutors charged Jeffrey Epstein with one count of sex trafficking of a minor and one count of conspiracy to commit sex trafficking. After pleading not guilty to the crimes, Epstein was denied bail, and was later found dead in his Manhattan jail cell. The cause of death was ruled a suicide. Ghislaine Maxwell's Relationship to Prince Andrew & the Royal Family. Prince Andrew Controversy at Princess Beatrice’s Wedding.

Two sisters, two royal weddings, two very different sets of circumstances. When Princess Eugenie walked down the aisle in October 2018 at St George’s Chapel and later processed through the streets of Windsor there was, of course, no global coronavirus pandemic to contend with. However, that wasn’t the only thing that set her lavish wedding apart from the intimate, secret ceremony of her sister Princess Beatrice to Edoardo Mapelli Mozzi last Friday. Untitled. British PM Boris Johnson Denies U.S. Authorities Contacted Him About Prince Andrew Regarding Jeffrey Epstein Investigation. By Sarah Curran. 3 Jul 2020 10:06 AM. 'Crushing experience' awaits Ghislaine Maxwell at troubled jail. Royal Source Says Prince Andrew Regrets Not Apologizing To Jeffrey Epstein Victims In Disastrous TV Interview. By Brent Furdyk. 14 Jun 2020 10:58 AM Prince Andrew is looking back at his notorious November 2019 television interview as a “source of regret.”

In the interview, conducted by “Newsnight” presenter Emily Maitlis, the Duke of York denied the allegations of Virginia Giuffre that he had sex with her on several occasions when she was underage, through his association with billionaire Jeffrey Epstein. According to a report in The Sunday Times, a source close to the duke said. “I don’t think he regrets the intention behind the interview, which was to clear the air for his family, the royal family and the institution. Jeffrey Epstein Investigators Once Again Ask For The ‘Benefit’ Of Prince Andrew’s ‘Statement’ During Ghislaine Maxwell Arrest. 'Crushing experience' awaits Ghislaine Maxwell at troubled jail.

Sarah Ferguson pictured dashing to palace for 'crisis summit with Prince Andrew' Prince Andrew's media advisor quit two weeks ago after warning him not to do interview.