Whether you are researching information for Black History Month or planning a visit to a historical site, explore the information in this guide to discover significant people, places, books, articles, and more.

Carter G. Woodson Home. Carter Godwin Woodson was born on December 19, 1875 in New Canton, Virginia to parents that had been enslaved. 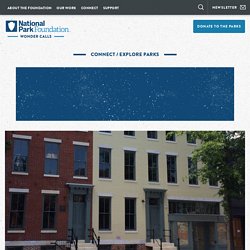 As an African American boy growing up in central Virginia during the late 19th century, he had few educational or employment opportunities. African Burial Ground National Monument. Birmingham Civil Rights National Monument. 16th Street Baptist Church Bombing (1963) On September 15, 1963, the congregation of the 16th Street Baptist Church in Birmingham, Alabama greeted each other before the start of Sunday service. 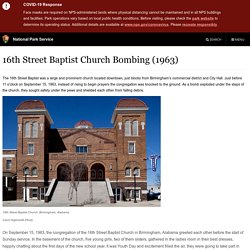 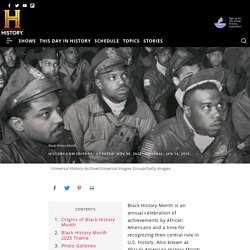 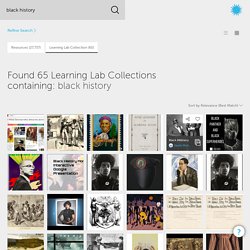 This Learning Lab explores the importance of representation in popular media. How are people portrayed? Why are they portrayed? What does this say about a people in a society and the society itself? How do these messages affect and inform us about others and ourselves? Wunc.

The History of Hayti, The Anchor of Durham's African-American Neighborhood by Amanda Magnus and Frank Stasio (3/20/2019) – starrgpublishing

In the 1970’s when the St. Joseph’s AME Church congregation moved to a new church home, the original structure became the catalyst for the formation of the St. Joseph’s Historic Foundation (SJHF). The Foundation was incorporated in 1975 with the intention of preserving the embellished old sanctuary and adapting it for cultural and civic events. SJHF’s mission is preserving and advancing the heritage and culture of historic Hayti and the African American experience through programs that benefit the broader community locally, nationally and globally. The church complex, renamed the Hayti Heritage Center, is listed on the register of national historic landmarks. Descendants of the original residents of the district once known as “Black Wall Street” continue to visit the Center along with other residents and visitors from surrounding areas. – starrgpublishing

Click on "About the Music" and scroll down to "Resources" for a list of websites to further explore the history of North Carolina musicians, past and present. This website is maintained by the North Carolina Arts Council, a division of the NC Department of Natural and Cultural Resources. – starrgpublishing 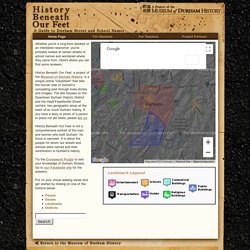 Here's where you can find some answers. A museum that seeks to understand American history through the lens of the African American experience. The King Center - Martin Luther King, Jr. National Historical Park. Facing Frederick: The Life of Frederick Douglass, a Monumental American Man. If you like WHO WAS MARTIN LUTHER KING, JR.? 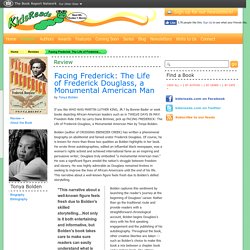 By Bonnie Bader or seek books depicting African-American leaders such as in TWELVE DAYS IN MAY: Freedom Ride 1961 by Larry Dane Brimner, pick up FACING FREDERICK: The Life of Frederick Douglass, a Monumental American Man by Tonya Bolden. Bolden (author of CROSSING EBENEZER CREEK) has written a phenomenal biography on abolitionist and famed orator Frederick Douglass.

Of course, he is known for more than those two qualities as Bolden highlights in her book. He wrote three autobiographies, edited an influential black newspaper, was a woman’s rights activist and achieved international fame as an inspiring and persuasive writer; Douglass truly embodied “a monumental American man.” The Frederick Douglass 200: the people who embody the abolitionist's spirit and work. Fighting for Freedom: Lewis Hayden and the Underground Railroad.

The video about Lewis Hayden was published by the National Park Service Underground Network to Freedom Program. Freedom Roads is designed to recognize Freedom Seekers whose stories testify to the indomitable spirit found in thousands who strove to be free. There are 32 Freedom Roads sites across North Carolina – starrgpublishing

This 6,000 page reference center is dedicated to providing information to the general public on African American history and the history of more than one billion people of African ancestry around the world. We invite you to explore and use all the resources of BlackPast. – starrgpublishing 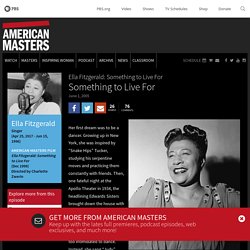 Photo: William P. Gottlieb. Her first dream was to be a dancer. Growing up in New York, she was inspired by “Snake Hips” Tucker, studying his serpentine moves and practicing them constantly with friends. Then, one fateful night at the Apollo Theater in 1934, the headlining Edwards Sisters brought down the house with their dancing. Born in Newport News, Virginia in 1917, Ella Fitzgerald moved with her mother to New York after the death of her father. During her time with Webb’s band, Fitzgerald recorded with a number of other musicians, including Benny Goodman. Angelou, Maya. By Emily HortonNC Government & Heritage Library, 2012.

Maya Angelou was best known as a poet and the best-selling author of I Know Why the Caged Bird Sings (1970). 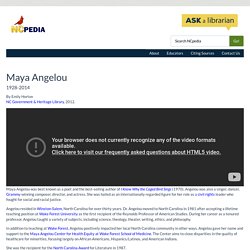 Angelou was also a singer, dancer, Grammy-winning composer, director, and actress. She was hailed as an internationally regarded figure for her role as a civil rights leader who fought for social and racial justice. Black Perspectives.

Black Perspectives is the award-winning blog of the African American Intellectual History Society (AAIHS). As engaged scholars, we are deeply committed to producing and disseminating cutting-edge research that is accessible to the public and is oriented towards advancing the lives of people of African descent and humanity. We serve as a medium to advance these critical goals. – starrgpublishing

His mother, Elizabeth, a schoolteacher, and his father, James, first met at the Lincoln Normal School ( now Alabama State University), one of the few places in the state where a black person could continue school beyond the eighth grade. 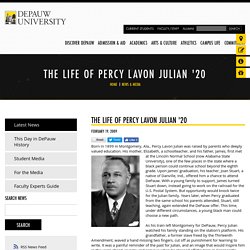