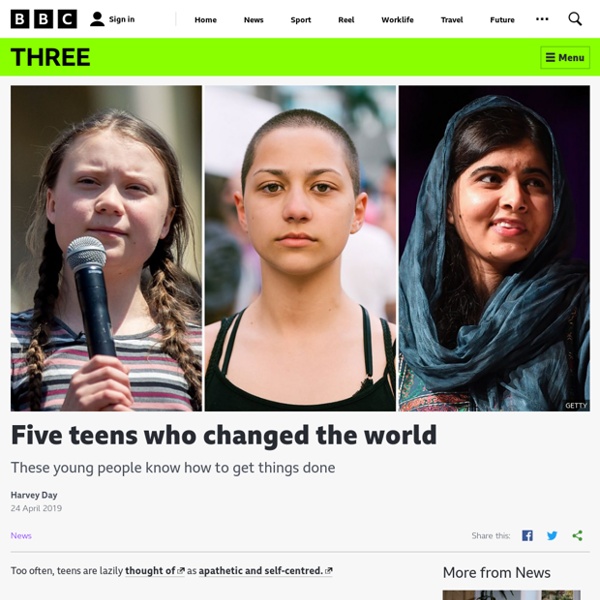 Standing With Malala: Meet the Teenagers Who Survived the Taliban and Kept Going to School by Jing Fong and Araz Hachadourian On a Tuesday in October 2012, a bus carrying the students of Khushal Girls High School and College in Pakistan’s Swat Valley came to a stop. The girls inside were on their way home from a day of exams. “I was looking outside daydreaming,” recalls Shazia Ramzan, who was 14 years old at the time. “I was talking with my best friend, Sana,” says Ramzan's friend, Kainat Riaz, who was 16. “I was so happy that I finished my paper.”

webenglish Facts and discussions about the US gun laws and the killings in American high schools, suitable for intermediate (A2-B2) levels, from yr 7 and up in Sweden Background Warm-up Song Malala Yousafzai: The Bravest Girl in the World In this exclusive excerpt from her autobiography, I Am Malala, young activist Malala Yousafzai recounts the day she was shot by the Taliban. In a country that’s seen more than its share of violence, the fate of one teenager might not seem to count for much. But somehow Malala Yousafzai of Pakistan has managed to become an international inspiration. She was only 11 when she took on the Taliban, demanding that girls be given full access to school. Two Truths and a Lie Ideas, Examples & Instructions The game Two Truths and a Lie is a great party game for teenagers and can also be a good icebreaker in meetings, classes or other situations where you need to make introductions. Below are some examples of truths or lies if you're already familiar with the game and just need to get some ideas. These are easy to modify to make them true (or not true) for yourself. For information on how to play the game, see below the examples.

English Conversation – Human Rights This is the preparation material for an English conversation lesson about human rights. Human rights are rights inherent to all human beings, whatever our nationality, place of residence, sex, national or ethnic origin, colour, religion, language, or any other status. We are all equally entitled to our human rights without discrimination. Free Online Reading Comprehension Exercises EnglishMaven Free online Reading Comprehension Exercises and Quizzes. We love reading comprehension. We think you do too. Nelson Mandela - Biographical Questions and answers on Nelson Mandela Nelson Rolihlahla Mandela was born in Transkei, South Africa on July 18, 1918. His father was Hendry Mphakanyiswa of the Tembu Tribe. Mandela himself was educated at University College of Fort Hare and the University of Witwatersrand where he studied law. He joined the African National Congress in 1944 and was engaged in resistance against the ruling National Party’s apartheid policies after 1948.

Book Excerpt: My Forbidden Face, by Latifa — When the Taliban took over the Afghan capital, Kabul, in 1997, Latifa was a 16-year-old teenager, listening to Elvis and dreaming of going to college. The Taliban's harsh rule transformed her life for the next four years. Following is an excerpt from her book, My Forbidden Face: Growing Up Under the Taliban — A Young Woman's Story, which she wrote in exile after fleeing the Taliban regime in 2001. Chapter One The White Flag Over the Mosque 9 A.M., September 27, 1996.

A Young Activist’s Advice: Vote, Shave Your Head and Cry Whenever You Need To But we couldn’t go back. All of us know what it feels like to be Harry Potter now. Even when people come up to us quietly to say thank you, you never know if they’re just trying to shoot you at close range. Going up against the country’s largest gun lobby organization was obviously something that needed to be done, but it means that the people we’re arguing against are the ones with the guns.

The life of a snail Question time! Do you think that although snails move very slowly, things around them seem to happen very quickly? Would you like to be a snail? What would be the positives and negatives? What do you think is holding the strawberry in that position? The Good Project All of us encounter challenges in our lives. Sometimes these challenges are quickly or easily resolved. Other times, it is not clear what to do, and there is no right or wrong solution. Mohamad - KidsRights I'm Mohamad. As a refugee child I couldn’t go to school, so I do everything to ensure that other children can. I would like to share my story with you, to make you see why and how I, as a ‘changemaker’, can put the world into motion. The initiative Before my family and I had to flee from Syria, we met Syrians who had fled their hometowns after complete destruction. Children had to leave everything behind, so I immediately wanted to help them.