A Mystic Claims that THIS Date Will Be the Onset of WW3 – And It’s Just DAYS Away! World War 3 seems to be closer than we think, according to mystic Horacio Villegas’ prediction. 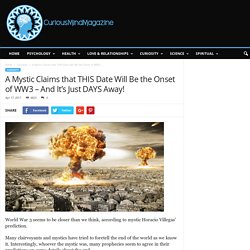 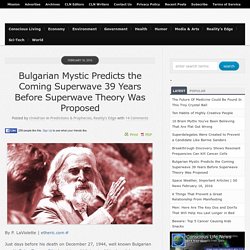 LaViolette | etheric.com Just days before his death on December 27, 1944, well known Bulgarian mystic Peter Deunov had a vision which inspired him to relate a prophecy of what was in store for the human race in the century that was to follow. Deunov, also known to Bulgarians by his spiritual name Beinsa Douno, was a philosopher, musician and spiritual teacher who developed a form of esoteric Christianity. Curiously, his prophecy anticipated in great detail the concept of a superwave which he predicted was to purify the Earth in the very near future and not only bring about tremendous geological transformation, but also spiritually change the world, bringing into being a new human race, the “sixth race.”

Peter Deunov begins his prophecy with an accurate reference to a coming Galactic superwave. “…everybody will soon be subjugated to divine Fire, that will purify and prepare them in regards to the New Era. Bulgarian Nostradamus Made a Chilling Predictions for 2016 and Beyond. A blind mystic who reportedly foretold 9/11, the 2004 Boxing Day tsunami, the Fukushima nuclear spill and the birth of ISIS also made dire predictions for 2016 and beyond, the Australian newspaper Perth Now reports. 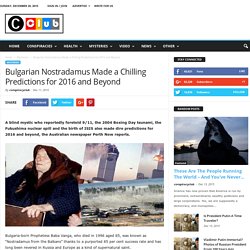 Bulgaria-born Prophetess Baba Vanga, who died in 1996 aged 85, was known as “Nostradamus from the Balkans” thanks to a purported 85 per cent success rate and has long been revered in Russia and Europe as a kind of supernatural saint. Of the hundreds of predictions Vanga made over her 50-year career as a celebrated clairvoyant, a large number alluded to natural and climate change-related disasters. She warned of melting polar ice caps and rising sea temperatures back in the 1950s, decades before anyone had heard of global warming.

Bulgarian Mystic Baba Vanga Predicted 9/11, 2004 Tsunami and ISIS. These Are Her Prophecies for 2016 and Beyond. Notice the things happening around us as we speak. 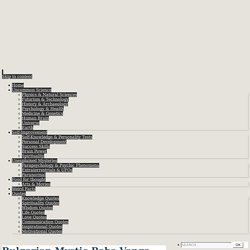 Many of these occurrences were predicted decades ago, not in some publicity stunt on television nor were they witnessed in some circus side show. Will Russia’s involvement in Syria spark the War of Gog and Magog, as prophesied in the Bible? As Russia’s military involvement in Syria increases, many Christians are now beginning to believe that the country is Magog from the End Times. 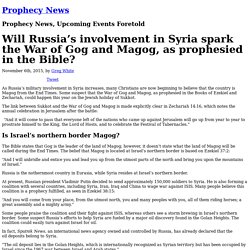 Some suspect that the War of Gog and Magog, as prophesied in the Books of Ezekiel and Zechariah, could happen this year on the Jewish holiday of Sukkot. The link between Sukkot and the War of Gog and Magog is made explicitly clear in Zechariah 14:16, which notes the annual celebration in Jerusalem after the battle: “And it will come to pass that everyone left of the nations who came up against Jerusalem will go up from year to year to prostrate himself to the King, the Lord of Hosts, and to celebrate the Festival of Tabernacles.” The Bible states that Gog is the leader of the land of Magog; however, it doesn’t state what the land of Magog will be called during the End Times.

The belief that Magog is located at Israel’s northern border is based on Ezekiel 37:2: “There is a prophecy about Moshiach (Messiah) coming from the north. Sources: 80 Years Ago Edgar Cayce Predicted Putin’s Role in Stopping WW3. Buck Rogers, StaffWaking Times Watching geo-political events unfold today is like watching a slow motion train wreck, especially if you’re informed by history and understand the connection between ‘World Wars‘ and the unseen influences behind international politics and global banking. 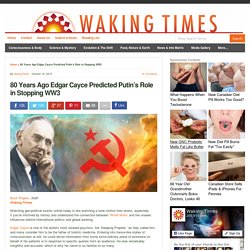 Edgar Cayce is one of the world’s most revered psychics, the ‘Sleeping Prophet,’ as they called him, and many consider him to be the father of holistic medicine. Entering into trance-like states of consciousness at will, he could divine information from some extra-ordinary plane of existence on behalf of his patients or in response to specific queries from an audience. He was remarkably insightful and accurate, which is why his name is so familiar to so many.

“Dreams are today’s answers to tomorrow’s questions.” Romanian Prophet Who You Never Heard Of Prophesied 9/11, WW3. 12 Events That Will Occur In September That You Should Know About. Could this be the month when the UN Security Council resolution establishing a Palestinian state is actually adopted? 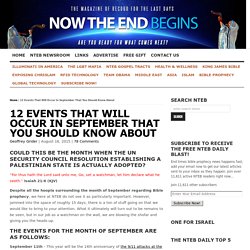 “For thus hath the Lord said unto me, Go, set a watchman, let him declare what he seeth.” The Prophecy of the Seven Thunders. Terms and Conditions Welcome to www.ewao.com (the "Website"). 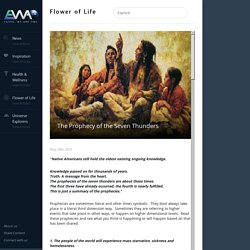 Phoenix Journals. From The Mountain Prophecies - A timetable for events of The Tribulation. Brown Dwarf Star Flyby estimated maximal Earth impact date of June-July 2013 - WebBots. VANCOUVER, BC - ﻿Clif High, developer of the WebBots, has predicted June-July 2013 as a possible date for a global coastal event also predicted by Dr. 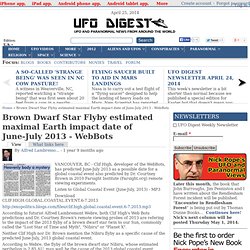 Neither Clif High nor Dr. Other Nibiru experts such as Marshall Masters, a former CNN science feature producer, has forecast February 14, 2013 as the date that Planet X reaches its perihelion, with the maximal damage to Earth being done in the period between February 14 to July 14, 2013 (when Nibiru begins its transit out of our solar system). Mr. Mr. Mr. Mr. Mr.