How Widespread Is the Use of Glyphosate in Our Food Supply? As the active ingredient in Monsanto’s branded Roundup weed killer, along with hundreds of other weed-killing products, the chemical called glyphosate spells billions of dollars in sales for Monsanto and other companies each year as farmers around the world use it in their fields and orchards. 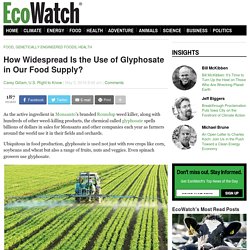 Scientist who linked GMOs and glyphosate to rat tumors wins SECOND court case against criminal biotech shills who forged signatures to discredit his research. The Parisian High Court has ruled that French Professor Gilles-Eric Seralini, a scientist known for his controversial research linking GM feed with cancerous tumor growth in rats, was right when he concluded that GMOs are unsafe for human consumption. 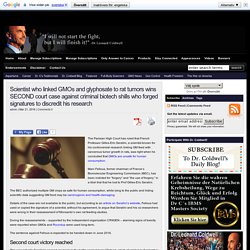 Marc Fellous, former chairman of France’s Biomolecular Engineering Commission (BEC), has been indicted for “forgery” and “the use of forgery,” in a libel trial that he lost to Prof Gilles-Eric Seralini. The BEC authorized multiple GM crops as safe for human consumption, while lying to the public and hiding scientific data suggesting GM food may be carcinogenic and health-damaging. Details of the case are not available to the public, but according to an article on Seralini’s website, Fellous had used or copied the signature of a scientist, without his agreement, to argue that Seralini and his co-researchers were wrong in their reassessment of Monsanto’s own rat feeding studies. Second court victory reached. Coffee Farmers Sue Monsanto for Hiding Cancer-Causing Impact of Glyphosate.

Monsanto Co. is facing another lawsuit alleging that exposure to glyphosate, the primary ingredient in the company’s flagship product Roundup, causes cancer. 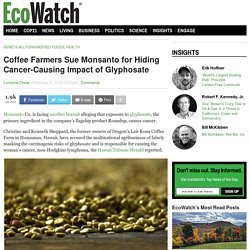 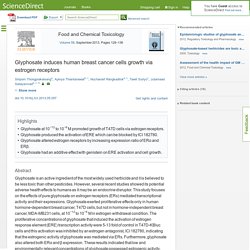 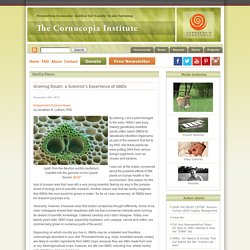 Latham, PhD By training, I am a plant biologist. In the early 1990s I was busy making genetically modified plants (often called GMOs for Genetically Modified Organisms) as part of the research that led to my PhD. Into these plants we were putting DNA from various foreign organisms, such as viruses and bacteria. I was not, at the outset, concerned about the possible effects of GM plants on human health or the environment. Gradually, however, it became clear that certain companies thought differently. Hawaii Sees 10 Fold Increase in Birth Defects After Becoming GM Corn Testing Grounds. Waimea, HI – Doctors are sounding the alarm after noticing a disturbing trend happening in Waimea, on the island of Kauai, Hawaii. 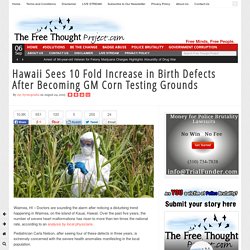 Over the past five years, the number of severe heart malformations has risen to more than ten times the national rate, according to an analysis by local physicians. Pediatrician Carla Nelson, after seeing four of these defects in three years, is extremely concerned with the severe health anomalies manifesting in the local population. Nelson, as well as a number of other local doctors, find themselves at the center of a growing controversy about whether the substantial increase in severe illness and birth defects in Waimea stem from the main cash crop on four of the six islands, genetically modified corn, which has been altered to resist pesticide.

Hawaii has historically been used as a testing ground for almost all GMO corn grown in the United States. According to a report in The Guardian: Monsanto Class Action. Can Glyphosate Really Be Present in Human Breast Milk? Catherine J. 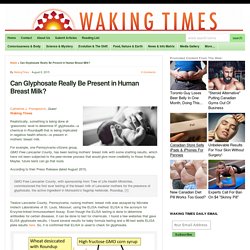 Monsanto Has Known Since 1981 That Glyphosate Promotes Cancer. Dr. 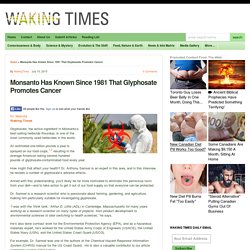 MercolaWaking Times Glyphosate, the active ingredient in Monsanto’s best-selling herbicide Roundup, is one of the most commonly used herbicides in the world. Bombshell Secret Documents Show Monsanto Knew About Glyphosate Link To Cancer Over 35 Years Ago. + How You Can Have Yourself Tested For Glyphosate Contamination June 20 2015 | From: AllHealthWorks / FeedTheWorld Research Scientist Dr. 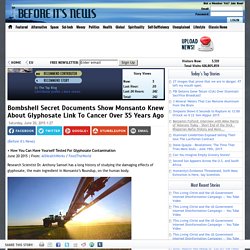 Anthony Samsel has a long history of studying the damaging effects of glyphosate, the main ingredient in Monsanto’s Roundup, on the human body. The Monsanto - Autism - Parasite Connection. Dr. 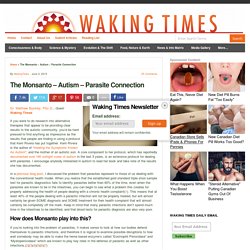 Matthew Buckley, PSc.D., GuestWaking Times If you were to do research into alternative therapies that appear to be providing clear results to the autistic community, you’d be hard pressed to find anything as impressive as the results that people are finding in using a protocol that Kerri Rivera has put together. Kerri Rivera is the author of “Healing the Symptoms Known As Autism”, and the mother of an autistic son. Sri Lanka’s Newly Elected President Bans Monsanto's Glyphosate. Christina Sarich, Natural SocietyWaking Times As glyphosate spikes deadly chronic kidney disease 5-fold As the US government comes up with ever more creative stall tactics, Sri Lanka’s newly elected president, Maithripala Sirisena, has announced that the import of Monsanto’s favorite killing-tool, glyphosate, will no longer be allowed in the country.

Sirisena is a farmer and ex health minister, and blames glyphosate for rising rates of chronic kidney disease (CKD) throughout the Sri Lankan farming community. Its More Than Monsanto. - Advertisement - I am an organic farmer in Ecuador. My wife and I moved here almost five years ago from Chicago to retire. I knew almost nothing about agriculture and even less about nutrition.

Former Pro-GMO Scientist Reveals Secrets of Years of Research. Former GMO Engineer Drops Biotech and Goes Organic. Guest post by Ken Roseboro The “conversion” of former anti-GMO activist Mark Lynas to GMO promoter has garnered huge media attention, but Thierry Vrain, Ph.D., a former genetic engineer who speaks out against the risks of genetically engineered foods, has far more credibility—and a far more important story to tell the public. Thierry Vrain’s career has spanned the full range of agriculture—from being a proponent of “chemical” agriculture and genetic engineering to being an advocate for organic farming and an opponent of GMOs. A native of France, Vrain earned an undergraduate degree in plant physiology from the Université de Caen and a doctoral degree from North Carolina State University. After moving to Canada he taught plant physiology at Université du Québec in Montréal. Then he worked for 30 years as a research scientist for the Canadian government in Québec and British Columbia where he conducted research on genetically modified potatoes, among other projects.

Colombia Bans Glyphosate From Being Sprayed On Coca Plants. Glyphosate may be rampantly sprayed on US crops, but Colombia isn’t taking any changes with their coca plants… Maybe You Aren't Gluten Intolerant. Maybe You’re Just Poison Intolerant. - Expand your Consciousness. The World’s Most Credible Medical Journal Outlines Bad News For Monsanto. Given the restrictions and the level of control placed upon the disclosure of information when it comes to “credible” medical studies, it seems surprising that glyphosate, the most commonly used herbicide on the planet, has been officially deemed a dangerous health hazard to human beings by the mainstream health community. “Glyphosate currently has the highest global production volume of all herbicides. Widely used herbicide linked to cancer. Report Finds Gerber Baby Food Filled with GMOs. By Christina Sarich | Natural Society What kind of person, even as the head of a major food retailer, would want to feed developing children pesticides and questionable genetically modified ingredients?

New Study Links Pesticide Exposure in Pregnant Women to Autism. By Christina Sarich | Natural Society Posted on March 25, 2015 A new study shows that more than half of all women exposed to pesticide chemicals show an increased risk of autism in their unborn children. WHO admits Monsanto's glyphosate 'probably' causes cancer. Why You Are Insane If You Think GMOs Are Safe.