How To Make 3D Hologram Projector - No Glasses. A paper microscope that costs only 50 cents can detect malaria from just a drop of blood. For a whole lot of people, especially those in developing countries, science — and with it, medicine — isn’t readily available to the majority of citizens. 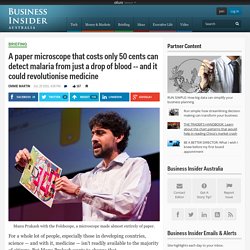 But Manu Prakash wants to change that. Prakash, an assistant professor of bioengineering at Stanford, is the proprietor of “frugal science,” a term he coined to explain the movement toward building cheap versions of high tech tools. His endeavour aims to make medical devices both affordable and available to the masses. The way Prakash sees it, labs don’t need the most expensive equipment out there in order to reach profound breakthroughs.

“Today people look at these extraordinary labs and forget that in the 1800s they could still do the exact same science,” he told The New York Times. So in 2014 he created a paper microscope, aptly named the Foldscope, that costs only 50 cents to produce. Though microscopes might seem like a mundane piece of equipment, they remain an integral part of detecting disease and analysing blood samples. Superfast Lasers Create A Hologram You Can Touch. This incredible electron micrograph shows light as both a particle and a wave. Scientists achieve X-ray vision with safe, visible light. If you think X-rays and other forms of radiation have a monopoly on penetrating opaque objects, visible light begs to differ. 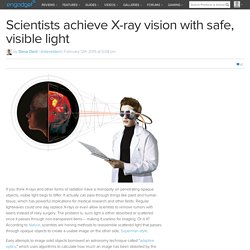 It actually can pass through things like paint and human tissue, which has powerful implications for medical research and other fields. Regular lightwaves could one day replace X-rays or even allow scientists to remove tumors with lasers instead of risky surgery. The problem is, such light is either absorbed or scattered once it passes through non-transparent items -- making it useless for imaging. Or is it? According to Nature, scientists are honing methods to reassemble scattered light that passes through opaque objects to create a usable image on the other side, Superman-style.

Early attempts to image solid objects borrowed an astronomy technique called "adaptive optics," which uses algorithms to calculate how much an image has been distorted by the atmosphere. Science trumps the Force to create a real-life lightsaber. Researchers from MIT and Harvard create a new form of matter and teach us all a lesson about the power of quantum friendship. 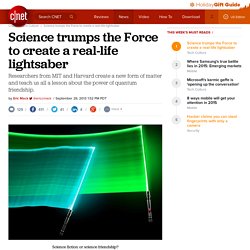 In journalism, there's something called a lede, which is just another word for the main or most important part of your story. Normally you want to lay it out for the reader in the first sentence or two. Obviously, I'm hesitating here. That's because I can't decide if it's more important that researchers at MIT and Harvard have just managed to create a previously unobserved form of matter by getting photons to bind together into molecules, or the fact that the result is basically a real-life lightsaber -- that could be part of a quantum computer one day. Actually, I think what this story is really about is...friendship. See, photons -- which are the elementary particles of light -- tend to be massless and kind of aloof. Access : Observation of collective excitation of two individual atoms in the Rydberg blockade regime : Nature Physics.

Buddhist Singing Bowls Inspire New Tandem Solar Cell Design. Phys Niraj Lal with the Buddhist bowl which inspired his research into solar cells Credit: OK-White Lane) The shape of a centuries-old Buddhist singing bowl has inspired a Canberra scientist to re-think the way that solar cells are designed to maximize their efficiency. 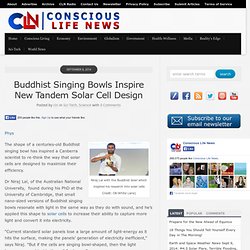 Dr Niraj Lal, of the Australian National University, found during his PhD at the University of Cambridge, that small nano-sized versions of Buddhist singing bowls resonate with light in the same way as they do with sound, and he’s applied this shape to solar cells to increase their ability to capture more light and convert it into electricity. “Current standard solar panels lose a large amount of light-energy as it hits the surface, making the panels’ generation of electricity inefficient,” says Niraj. “But if the cells are singing bowl-shaped, then the light bounces around inside the cell for longer”.

[read full post here] Tags: Buddhist singing bowl, featured. How to Make Glowing Nanoparticles from Coal. Coal can be turned into large volumes of glowing quantum dots, according to Rice University researchers. The new method could represent a very cheap way to produce fluorescent carbon nanoparticles that could be useful in biomedicine, and especially in the imaging of living human cells and tissues, says James Tour, a chemistry professor at Rice. Tour, who led the research, says early tests suggest that the particles are nontoxic, and says his group is working on developing the particles into fluorescent probes and drug-delivery vehicles.

The researchers used sound waves to agitate three types of coal—bituminous, anthracite, and coke—each treated with acid. They then heated the samples for 24 hours. The resulting particles, which range in size from two to 40 nanometers, were made of several layers of graphene oxide, an atom-thick carbon compound with a highly ordered structure.

Tour and his colleagues say there is enough evidence to call the carbon particles quantum dots.