Home - Edinburgh Past And Present. Drb_booklet.pdf. Lost Edinburgh: The Luckenbooths. UP UNTIL the early 19th century the flow of traffic on Edinburgh’s busy High Street was restricted to just a few metres thanks to a group of medieval buildings known as the Luckenbooths. 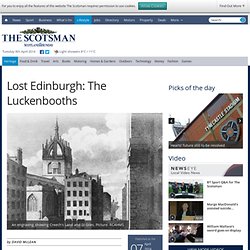 The Luckenbooths were a row of irregular-sized tenements and shops stretching along the north face of St Giles’ Kirk on the High Street. They sprang up in the mid-15th century primarily to appease the rising number of skilled artisans and speciality traders such as silversmiths and goldsmiths who demanded a more formal, permanent base to hawk their wares than the usual market stall method.

‘Buith-Raw’ The first building was constructed in 1440, and was a two-storey timber fronted house with an open merchant area at ground level. This initial house and the seven or eight others which followed it soon came to be known as the ‘Buith-Raw’ (Booth Row) and they varied greatly in height and character. Famous traders. Lost Edinburgh: Craigleith Quarry. CONCEALED beneath the busy retail outlets of Craigleith Shopping Park lies one of the capital’s most celebrated geological sites and the source of much of its neo-classical architecture. 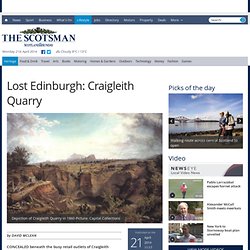 Located two miles north-west of Edinburgh city centre, Craigleith Quarry was active for over 300 years from 1615-1942. At its peak it was the largest and most productive of the city’s eight district quarries, with over a hundred workers generating up to sixty cartloads of stone at least four times a day. The 350 million year old Craigleith sandstone was a highly-sought after material for the capital’s architects and notoriously tough to quarry and work. Evidence of this is apparent in its buildings which have weathered well over the centuries. Early days. Why Urban History Matters  Going forward, let's not discount the influence of history's recurring themes in how we redevelop the urban realm. 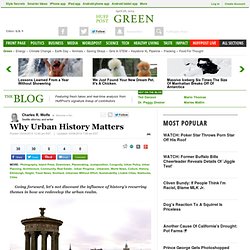 So many discussions about cities today look only forward, without fully considering the past. We presume ways of life that must change for the better: Greener, more inclusive and shareable; global in orientation; away from land use regulations that favor separation of uses, and towards healthier, less auto-dependent realms. I do not believe for a moment that urban change is so simple. Without a longer view, we risk undervaluing lessons learned long ago. Height, density, use/control of land and public health in urban settings have evolved for a very long time.

Last week, I went to Edinburgh, Scotland to see why this urban history matters. What is the value of historical perspective, particularly in the world heritage areas of central Edinburgh? The upper classes lived on upper floors. Later, wider streets cut into former closes and wynds, while others remained intact. Edinburgh Bookshelf. Our Town Stories. Scotland, Edinburgh History Information : Edinburgh-History.co.uk. 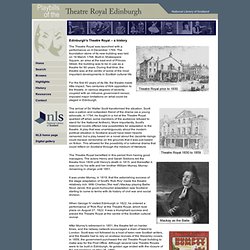 The foundation stone of its new building was laid on 16 March 1768. Built in Shakespere Square, an area at the east end of Princes Street, the building was to be in use as a theatre for 90 years. BBC History - Scottish Enlightenment: the age of genius in Edinburgh. 23 August 2013Last updated at 17:11. 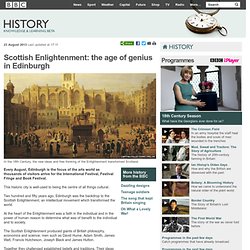 Edinburgh Old Town - Tourist Information on Historic Edinburgh. Visit the medieval town that gives Edinburgh its unique character Visiting the Old Town of Edinburgh is one of the most fascinating experiences Scotland's Capital City has to offer to its tourists. 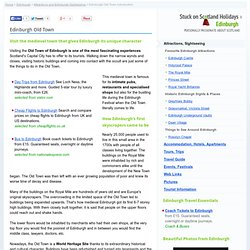 Walking down the narrow wynds and closes, visiting historic buildings and coming into contact with the occult are just some of the things to do in the Old Town. Day Trips from Edinburgh See Loch Ness, the Highlands and more. Guided 5-star tour by luxury mini-coach, from £26.selected from viator.com Cheap Flights to Edinburgh Search and compare prices on cheap flights to Edinburgh from UK and US destinations.selected from cheapflights.co.uk Bus to Edinburgh Book coach tickets to Edinburgh from £15. This medieval town is famous for its intimate pubs, restaurants and specialised shops but also for the bustling life during the Edinburgh Festival when the Old Town literally comes to life.

History - British History in depth: The Rise of Edinburgh. EDINBURGH ROYALMILE - HISTORY OF THE ROYAL MILE, FAMOUS SCOTS, OLD PHOTOGRAPHS & ILLUSTRATIONS, SCOTTISH HISTORY, HISTORICAL TIMELINE, THE DARK SIDE OF THE ROYAL MILE. A History of Edinburgh. In the 19th century Edinburgh did not become a manufacturing center and so lost its position as Scotland's number one city to Glasgow. 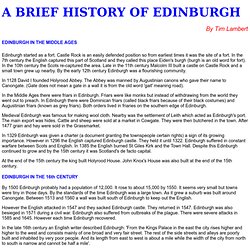 An Historic Capital, This history of Edinburgh. History of Edinburgh - Lonely Planet Travel Information. The recent past The biggest event of recent years has been the long-awaited completion of the new Scottish Parliament Building at Holyrood, which was officially opened by the Queen on 9 October 2004. 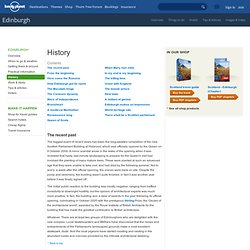 A minor scandal arose in the wake of the opening when it was revealed that hasty, last-minute landscaping to prepare for the Queen's visit had involved the planting of many mature trees. These were planted at such an advanced age that they were unable to take root, and had died by the following summer. Not to worry; a week after the official opening, the cranes were back on site. Despite the pomp and ceremony, the building wasn't quite finished; in fact it was another year before it was finally signed off.

The initial public reaction to the building was mostly negative, ranging from baffled incredulity to downright hostility, but the opinion of architectural experts was much more positive. Whatever. . ^ Back to top.