Hillary Clinton Facts. Described as the first major U.S. female political figure since Eleanor Roosevelt, Hillary Rodham Clinton (born 1947) was considered a force to be reckoned with in American politics. 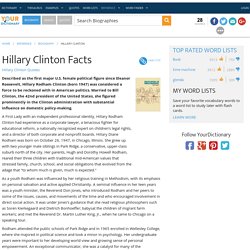 Married to Bill Clinton, the 42nd president of the United States, she figured prominently in the Clinton administration with substantial influence on domestic policy-making. A First Lady with an independent professional identity, Hillary Rodham Clinton had experience as a corporate lawyer, a tenacious fighter for educational reform, a nationally recognized expert on children's legal rights, and a director of both corporate and nonprofit boards. Cartoon: Don't Go to Europe! - The English Blog. This cartoon by Ben Jennnings from The Guardian connects two stories to do with the US presidential election: Donald Trump's warning that Britain and Europe are 'not safe places' after the Brussels terror attacks, and the petition demanding that the organisers of this summer's Republican Convention allow people to carry legal weapons. 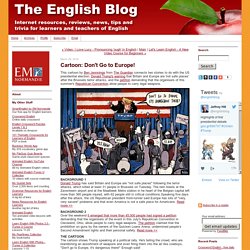 BACKGROUND 1Donald Trump has said Britain and Europe are "not safe places" following the terror attacks, which killed at least 31 people in Brussels on Tuesday. The twin blasts at the Zaventeem airport and at the Maalbeek Metro station in he heart of the Belgian capital left more than 360 people injured, with 62 people still in critical conditions.Speaking five days after the attack, the US Republican president front-runner said Europe has lots of "very, very severe" problems and that even America is not a safe place for Americans. Read more >> Untitled. US election 2016: How does it all work?

Image copyright Getty Images In January 2017, the most powerful nation on earth will have a new leader, after a drawn out and expensive campaign - but how does a US presidential election work? 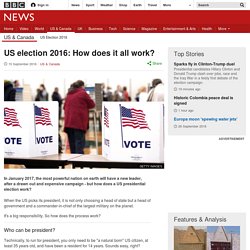 When the US picks its president, it is not only choosing a head of state but a head of government and a commander-in-chief of the largest military on the planet. Untitled. Winter is Trumping.