Best Election Videos for Kids & Teens. The 2020 election is fast approaching and kids are taking notice. 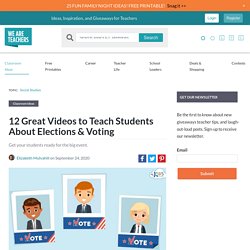 Teach them all the ins and outs of this important civic right and responsibility with these 12 awesome election videos for learners from PreK through high school. 1. Vote Steve Carrell joins Abby and Elmo as they learn all about the voting process by practicing to vote for their favorite snack. Produced by: Sesame Street (1:56) Best for PreK-K. 2. Big Bird learns all about what it looks like to vote on election day, including what a polling place looks like. 3. This video introduces the basics hows and whys of the voting process. 4. This informative video discusses statistics and polls, political parties, tools candidates use to get elected, and more. 5. Quick and engaging, this video explains voting districts, ballots, procedures, and how many people it takes to pull off a legitimate election. 6. Learn all about the first round of the election process-primaries and caucuses.

Presidential Elections Explained for Kids - KIWI Magazine. Every four years, Americans vote to choose the leader of their country. 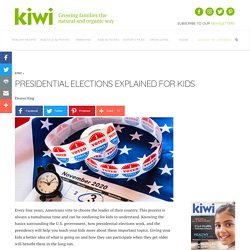 This process is always a tumultuous time and can be confusing for kids to understand. Knowing the basics surrounding the U.S. government, how presidential elections work, and the presidency will help you teach your kids more about these important topics. Civil Rights for Kids: Overview. What does "civil rights" mean? 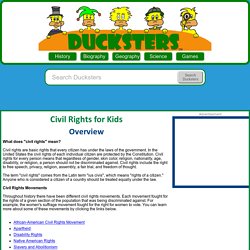 Civil rights are basic rights that every citizen has under the laws of the government. In the United States the civil rights of each individual citizen are protected by the Constitution. Civil rights for every person means that regardless of gender, skin color, religion, nationality, age, disability, or religion, a person should not be discriminated against. Civil rights include the right to free speech, privacy, religion, assembly, a fair trial, and freedom of thought. The term "civil rights" comes from the Latin term "ius civis", which means "rights of a citizen.

" Civil Rights Movements Throughout history there have been different civil rights movements. Civil Rights Leaders. U.S. Presidential Election Course - Courses made FOR kids, made BY kids. Election 2016 Timeline. Lesson Plans with Activities. How to Become President of the USA Poster. Download or order a poster.

(Please get your parent's permission) Lesson PlanVideos: The Requirements, Primaries and Caucuses, Conventions to Election, How Votes Are Counted, How to Become President U.S. Constitution's Requirements for a Presidential Candidate At least 35 years oldA natural born citizen of the United StatesA resident of the United States for 14 years Step 1: Primaries and Caucuses There are many people who want to be president and each of these people have their own ideas about how our government should work. Caucus: In a caucus, party members select the best candidate through a series of discussions and votes.Primary: In a primary, party members vote for the best candidate that will represent them in the general election. Step 2: National Conventions Each party holds a national convention to finalize the selection of one presidential nominee.

Step 3: General Election People in every state across the country vote for one president and one vice president. Ready to Use – Speakeasy News. The Rugby World Cup, taking place in Japan 20 September to 2 November is always a good opportunity to review English-speaking countries, since most of the leading teams are from Commonwealth nations. 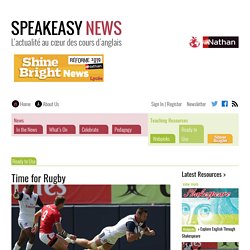 This A2/A2+ level article and audio dialogue can be can also be tied in to a unit reviewing hobbies, or used in conjunction … Continue reading “Time for Rugby” This document aims to allow you to work on the trailer of the upcoming movie Downton Abbey at a B1 level. Downton Abbey was originally a British historical period drama television series that aired from 2010 to 2015. It was set as a fiction based in a historical landscape between 1912 and 1926, in the … Continue reading “Downton Abbey” Celebrate the Mother Road festival in September with this illustrated Route 66 poster has lots of interesting landmarks to be found along “American’s Main Street”. This B1-level article will introduce your pupils to the Rockwell and Roosevelt Four Freedoms Exhibition (Caen Mémorial, June-October 2019). Vote for President. On November 8, Americans will go to the polls to vote for President. 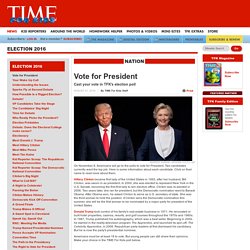 Two candidates currently want the top job. Here is some information about each candidate. Click on their name to read more about them. Hillary Clinton became first lady of the United States in 1993, after her husband, Bill Clinton, was sworn in as president. In 2000, she was elected to represent New York in the U.S. Donald Trump took control of his family's real-estate business in 1971.