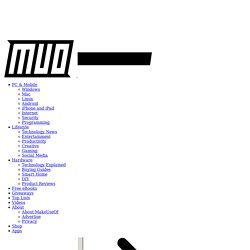 While the main desktop is easy enough to use, at times you’ll need to rely on command line entry in the terminal. But if you’re new to the Raspbian operating system and Linux, this is easier said than done. 11 Operating Systems You Can Run on Raspberry Pi. Costing just $40, the Raspberry Pi is cheap, versatile, and relatively powerful in a way its competitors are not. 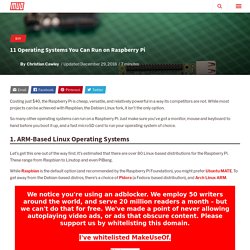 While most projects can be achieved with Raspbian, the Debian Linux fork, it isn’t the only option. So many other operating systems can run on a Raspberry Pi. Just make sure you’ve got a monitor, mouse and keyboard to hand before you boot it up, and a fast microSD card to run your operating system of choice. Let’s get this one out of the way first. It’s estimated that there are over 80 Linux-based distributions for the Raspberry Pi. While Raspbian is the default option (and recommended by the Raspberry Pi Foundation), you might prefer Ubuntu MATE. Then there’s Kali Linux for pen testing, and a whole host of operating system images intended for the Pi, covering so many different purposes. For youngsters, Kano OS is an education distro that is available for all Pi computers, not just those sold by Kano. 2. So, what’s available? How to Turn a TV Into a Retro Gaming System With Raspberry Pi Zero. The Raspberry Pi Zero, a compact and remarkably cheap (just $5) iteration of the popular mini-computer, has proven to be even more versatile than its predecessors. 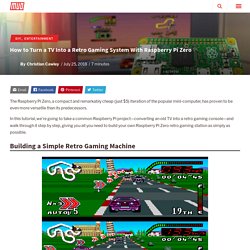 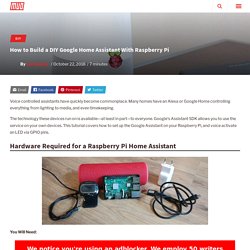 Many homes have an Alexa or Google Home controlling everything from lighting to media, and even timekeeping. The technology these devices run on is available—at least in part—to everyone. Google’s Assistant SDK allows you to use the service on your own devices. This tutorial covers how to set up the Google Assistant on your Raspberry Pi, and voice activate an LED via GPIO pins. Raspberry Pi with a fresh Raspbian install on the SD card.USB webcam or microphone.External speaker.Circuit from the Pi LED tutorial (optional)A browser signed into your Google account. Note: The equipment for this tutorial can vary somewhat. Also, I am using the 3.5mm output for audio. Plug in the USB webcam and speaker, and set up the LED circuit if you are using it. Setting Up the Sound This tutorial can be followed directly on the Pi or via an SSH connection into the Pi. Both ways begin in the terminal, to check the sound settings.

How to Install Android on a Raspberry Pi. But what about Android? 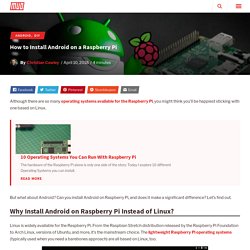 Can you install Android on Raspberry Pi, and does it make a significant difference? Let’s find out. Linux is widely available for the Raspberry Pi. From the Raspbian Stretch distribution released by the Raspberry Pi Foundation to Arch Linux, versions of Ubuntu, and more, it’s the mainstream choice. The 13 Best Raspberry Pi Projects of 2017. DIY tinkerers and coders have also been busy, creating ever more impressive projects with the Pi. 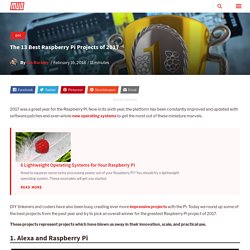 Today we round up some of the best projects from the past year and try to pick an overall winner for the greatest Raspberry Pi project of 2017. These projects represent projects which have blown us away in their innovation, scale, and practical use. The Amazon Echo and Echo Dot took off in a big way last year, and hot on the heels of its rise were the folks trying to integrate Alexa voice control into their Smart Home setups.

UC Davis Center for Integrated Computing and STEM Education » Download and Install. Release: 2018-01-23 (image_2018-01-23-c-stembian.zip)Based on Raspbian Stretch release: 2017-08-16 Click here to watch a step by step video tutorial on how to download and install C-STEMbian for Raspberry Pi Method A C-STEMbian is a super set of Raspbian, the default OS for Pi. 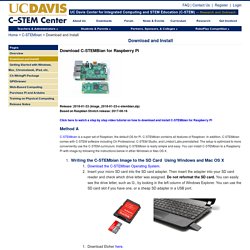 C-STEMbian contains all features of Raspbian. In addition, C-STEMbian comes with C-STEM software including Ch Professional, C-STEM Studio, and Linkbot Labs preinstalled. Writing the C-STEMbian Image to the SD Card Using Windows and Mac OS X Download Etcher here.Open Etcher and click “Select image” and choose image_2018-01-23-c-stembian.zip (this file will be in your Downloads folder) and click “Open” Click “Select drive”, choose your SD card, and click “Continue” Click “Flash!” Follow the instructions here on the menu at the left to access Pi from your Monitor, Windows laptop, Mac laptop, or Chromebook. 4 Best Raspberry Pi Smart TV Projects We’ve Seen So Far. Advertisement Need a smart TV but don’t have the budget? 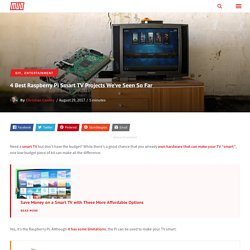 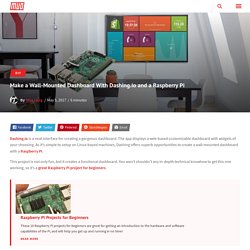 The app displays a web-based customizable dashboard with widgets of your choosing. 5 Mistakes Raspberry Pi Beginners Should Avoid. Advertisement Your Raspberry Pi is awesome, so it would be wrong to not give it the chance it deserves to change your life. 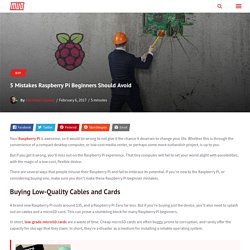 Whether this is through the convenience of a compact desktop computer, or low-cost media center, or perhaps some more outlandish project, is up to you. But if you get it wrong, you’ll miss out on the Raspberry Pi experience. That tiny computer will fail to set your world alight with possibilities, with the magic of a low-cost, flexible device. 6 Best Raspberry Pi Smart Mirror Projects We've Seen So Far. The magic mirror of the future won’t just say you’re the prettiest of them all. It’ll also tell you the time, date, weather outside, upcoming calendar appointments, and more.